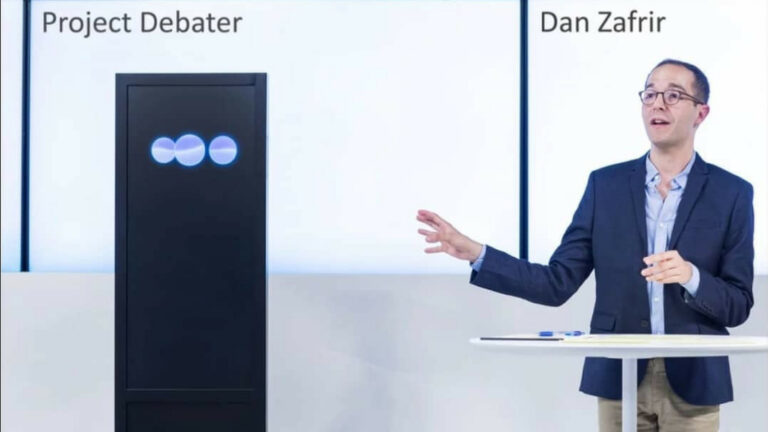 Named Project Debater, the AI was unveiled at IBM’s Watson West site in San Francisco, where it began by preparing arguments for whether governments should subsidize space exploration and whether the use of telemedicine should be increased.

Preparation for Project Debater began six years ago at the IBM’s Haifa research lab, but IBM Research principal investigator and creator of Project Debater Noam Slonim said the AI system only gained the ability to participate in debates with people two years ago.

During the first debate, the computer was pitted against 2016 Israeli national debate champion Noa Ovadia. Both sides delivered a four-minute opening statement, a four-minute rebuttal, and a two-minute summary in their arguments for each topic.

Project Debater delivered its opening argument in support of government subsidized space exploration by obtaining evidence from its massive database, comprised mainly of news articles and journals. After listening to Ovadia’s opposing argument, the computer delivered a rebuttal speech. Following closing summaries from each side, results from a snap poll showed that the majority of audience members thought Project Debater enriched their knowledge more than its human opponent.

The second debate between the computer and Israeli debate expert Dan Zafir featured opposing arguments on whether we should increase the use of telemedicine.

In both cases, IBM said Project Debater had not been trained on the topics and the debates were unscripted, with the exception of jokes which were added during the debates and greetings delivered at the start of a debate, to entertain the audience.

So who won the debates? The crowd judged that the AI system outperformed the human debaters in its ability to use a wide range of information in its arguments, but the humans had the edge when it came to delivery.

Project Debater is the latest AI innovation from IBM, whose “Deep Blue” system took on chess world champion Garry Kasparov in 1997 and Watson beat human champions on Jeopardy! In 2011. However debating takes on a different form of competition, one where language and persuasiveness play a role.