The Israeli team at play in Romania.

It wasn’t the first time, either. In fact, Israel has brought home the gold all seven years of the competition.

Each national team consists of the highest-scoring school’s top contenders in each of four games: Abalone, Quoridor, checkers and Octi. In Israel, 18 schools competed for the privilege of representing their country in the Romanian resort city of Sinaia against teams from Brazil, Italy, Romania, Hungary, Turkey, Australia, Panama, Ireland and the United Kingdom.

ISRAEL21c spoke with Avi Klein, the checkers champ of this year’s Israeli team from the Ma’aleh HaTorah school in Ma’aleh Adumim. This was the same school that won last year, too.

“I started learning the games in fifth grade and I didn’t really like them,” Avi admits. “Then I saw checkers and I wanted to play that. Checkers teaches you to think before you act, because after you play [a move] you can’t go back.”

He was accompanied to Romania by teammates Yehuda Klein (his first cousin), Ori Lifshitz and Aviad Loberbaum, chaperoned by adults including his father, David. Aviad, who was also on last year’s team that competed in Portugal, carried the Israeli flag as the boys made their entry to the playing floor to the melody of the Israeli folk song “Hevenu Shalom Aleichem” (“We bring peace to you”).

The boys were coached by teacher Moshe Ben-Ami as part of an enrichment program.

Patience is a winning virtue

The young contestants perfected their skills by playing game after game during recess and over weekends at home. “You need to be very patient,” says Avi. 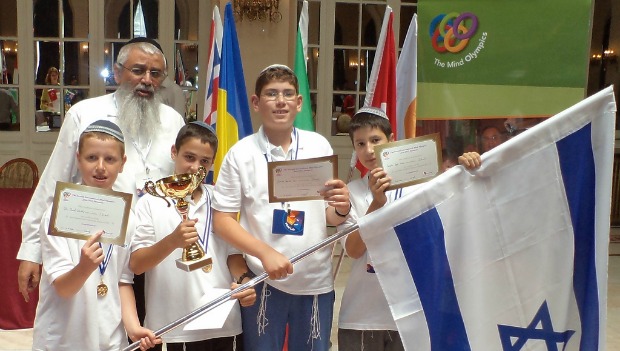 At the international MindLab Olympics, the only competitor who gave Avi a run for his money was a girl from Hungary who seemed to think out her strategy in exactly the same way that he does. He bested her in one game, while their other match ended in a draw.

“I was a little worried,” Avi recalls. “She almost won, so I did something to make a draw.” The Hungarian team came in second overall.

One of the benefits of making the international round is the opportunity to get acquainted with peers from different countries. Conversing mostly in English, the kids chatted between games, at meals and during activities over the four days. One of the places they visited was Bran Castle, a.k.a. Dracula Castle, near the Transylvanian border.

According to David Klein, the experience had value beyond the trophies the kids brought back to Israel for ranking No. 1 in both individual and team play.

“This whole process of mind games puts an emphasis on proper behavior, concentration, persistence, thinking, planning, perseverance, losing well and winning well,” he tells ISRAEL21c. “The fact that you can enjoy thinking hard is an important lesson also.”

Checkers is well known, but what about the other three “thinking games” in the MindLab Olympics?

Abalone is a strategy board game in which each player is represented by marbles of opposing colors. The board consists of 61 circular spaces arranged in a hexagon, five on a side. Each player has 14 marbles. The objective is to push six of the opponent’s marbles off the edge of the board.

Quoridor, which received the Mensa Mind Game award in 1997, is played on a game board of 81 square spaces. The goal of the game is to be the first player to move his or her pawn to any space on the opposite side of the board, navigating around “walls” that the opponent puts up to block the path.

Octi is similar to checkers and chess but more complex. It allows for multiple jumping, capturing and other special movements. On each move, players decide whether to bring in new pieces, upgrade their existing pieces, or move a piece.

Click here for details Increasing affinity, understanding and joy for Israel through education Click here for details
Bring Israel's story to life.
Millions of people around the world rely on us to gain a deeper understanding of Israel. We are the trusted source for original content you won't find anywhere else.
You can make a difference. Donate today to support journalism that brings Israel’s story alive.
SUPPORT ISRAEL21c
Read more on:   Activism, Education, competition, MindLab Olympics, Social Action