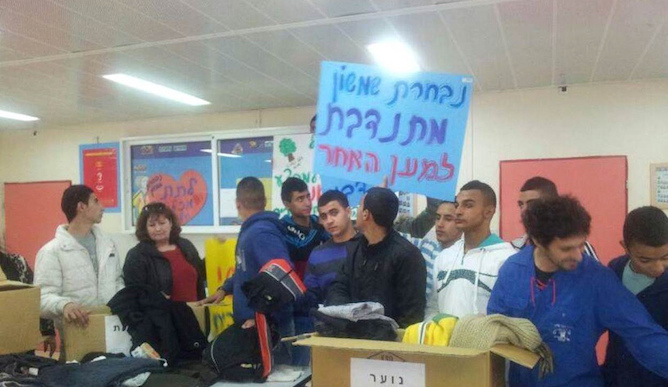 The sign at the collection site reads, “Team Shimshon is volunteering for ‘the other.’”

Pounds and pounds of sweaters, coats, blankets and other warming winter gear are on their way to Syrian refugees from a surprising source: a multi-ethnic Israeli high school located on a military base in the north, not far from the Syrian border.

Israeli Flying Aid, Hanoar Haoved VeHalomed Youth Movement and Dror Israel are the partners in the Human Warmth humanitarian project. Collection centers have been set up in 14 Israeli cities.

As the daughter of Holocaust survivors, Perlmutter felt the school should support this effort, even though Syria is an enemy state to Israel, and hundreds of thousands of the refugees have gone to Iraq, Lebanon, Jordan and Turkey – which have varying levels of diplomatic relations with Israel from zero to cool.

All that mattered, Cohen says, are the immediate needs of ordinary people trying to get through a cold winter in extremely difficult conditions.

For women and children

The school’s student council agreed immediately to participate in the Human Warmth project. Cohen took charge of the logistics, working with 10th-graders to solicit items especially for women and children.

“Our school puts great importance on volunteering for the community,” she says. “All the children contributed — it didn’t matter if they were Jewish or Arab — with a full heart.”

Amal-Shimshon is an unusual school, with 125 students of Druze, Bedouin, Christian Arab, Muslim Arab, Circassian and Jewish heritage sharing a camp with a large Israel Defense Forces equipment-maintenance base. Employees of the base also pitched in toward the drive.

In just a couple of days, 100 kilograms (220 pounds) of gear piled up near the principal’s office. Everything was boxed and transferred by truck through Human Warmth volunteers – after all Hebrew tags were removed, as per the group’s instructions.

Cohen says that as a result of Israeli press coverage, more donations have since come in and will be sent soon.

This humanitarian gesture to an “enemy people” is only the latest one making news in Israel.

Hospitals in Safed (Tzfat), Tiberias, Nahariya and Haifa have taken in hundreds of Syrian patients transferred from the border by Israeli military vehicles for treatment, at no charge. Ziv Medical Center in Safed, for instance, has delivered Syrian babies and provided care to many war casualties, including an eight-year-old Syrian girl whose leg was severely shattered and needed complex surgeries. She was discharged after two months at the Israeli hospital.