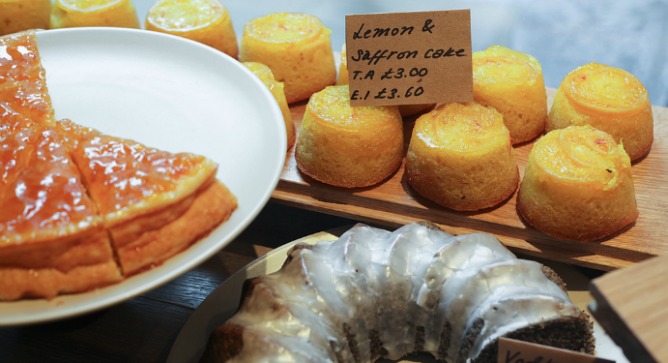 “Desserts are the thing we are most proud of,” says co-owner Itamar Srulovich.

They met 10 years ago while working together in an Italian restaurant in Herzliya. Last summer, accomplished husband-and-wife chefs Itamar Srulovich and Sarit Packer took the plunge of opening their own 25-seat restaurant in a fashionable residential district of London.

Honey & Co. is already creating a buzz among British foodies.

“The food here is stunning, alive with colour and texture,” gushed one critic. “This little Israeli-run café and takeaway only has a few seats, but they’re the most sought-after in Fitzrovia,” revealed another. “The cakes, enticingly displayed in the window, are true eye-candy.”

The self-taught Srulovich tells ISRAEL21c: “Desserts are the thing we are most proud of. Our cakes are sensational. My wife is a pastry genius — one of the best pastry chefs in the world.”

Before opening Honey & Co. with her husband, Packer was a pastry chef for the famed Israeli restaurateur Yotam Ottolenghi, and executive chef at one of his four successful London eateries. Everything at Honey & Co., from the breads to the jams, is made on premises from scratch.

A taste of home

While speaking with ISRAEL21c, Srulovich was making his signature special, stuffed grapevine leaves. 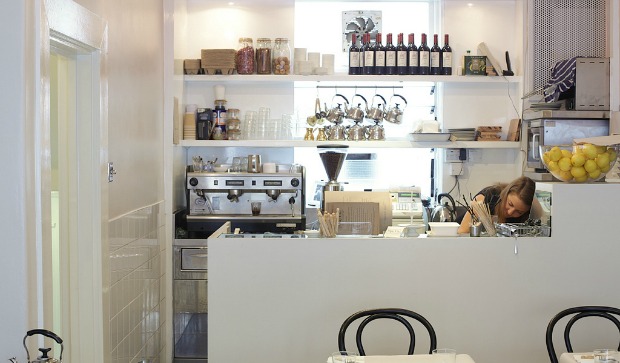 ‘A lot of people just stopped making this, even in very traditional restaurants,” he says. “We take the time to do these labor-intensive traditional dishes, to hand-roll them and do them as they used to be done, and it’s delicious.”

Srulovich stopped short of sharing his recipe, but he did reveal that the leaves are “cooked with mint, leeks and grapes, stuffed with rice and loads of spices.”

Honey & Co. is not a kosher restaurant but it brings tastes of the Middle East to Britain. “It’s the food that we grew up on and wanted to eat — what we miss,” says Srulovich.

Srulovich grew up in an ethnically diverse Jerusalem neighborhood, with a father of Eastern European heritage and a mother from Egyptian and Yemenite stock. “We had all the food traditions of all the communities in a small place,” he says.

Packer was born and raised in the Haifa area to parents who had immigrated from England. She went to culinary school in her parents’ native country, and when she and Srulovich married in 2004 they took off for London with the notion of doing some world travel and opening a restaurant one day. They never left. 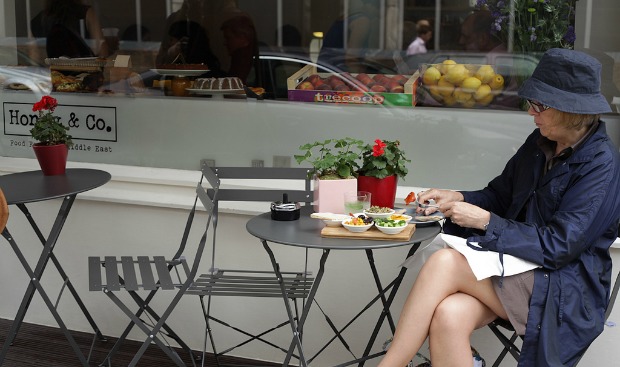 “We like it here,” says Srulovich, who worked as a private chef during the two years the 30-something couple was scouting locations for Honey & Co. “We feel happy and comfortable in London.”

They chose the out-of-the-way location for its small, homey atmosphere. “It was perfect for us. It’s very residential with a community feel to it. We wanted to be a neighborhood place.”

Srulovich says that what really sets their restaurant apart is the amount of care that goes into the cooking. During their early days in London they felt frustrated when they could not find the quality of ingredients they knew from home. “Now we can source the good stuff according to how we know things should taste,” says Srulovich.

“Nobody else gets the ingredients we get. Most of our produce is from Italy, Spain and France, as well as Turkey, Egypt and Morocco. Most of our herbs are from Israel. When we can get from Israel, we definitely try, because Israeli produce is superb.”