A new Israeli biometric technology can transform your family dog into a sophisticated warning system that can detect an intruder in your home and alert security forces, with just a bark. 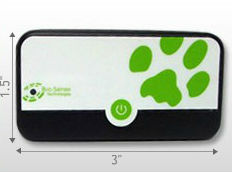 DBS (Dog Bio-Security System), created by Bio-Sense Technologies, is a biometric alert sensor integrated into the dog’s collar which analyzes a dog’s bark to determine if someone has broken into your house or is involved in other suspicious behavior. The computer-based system, which can be integrated into existing security systems like central control systems, home alarms, and CCTV monitoring systems, goes into operation the moment a dog starts to growl or bark.

If an intruder tries to break in, or actually succeeds in doing so, the dog’s barks rise rapidly in intensity and the technology goes to full alert, sending out details of the security breach to the homeowner via SMS, triggering the house alarm, and even alerting local security companies.

According to FBI statistics, more than 1.2 million burglaries took place in US residential structures in 2005. The DBS system, which goes on sale in the US next year, can differentiate and decode all the different barks of a dog, from a dog howling at the moon, to barking at a person passing in the street, or welcoming a member of the family home.

“A dog barks differently if he sees a cat, or he wants to play with you, or if he’s greeting you when you come in,” Eyal Zehavi, the founder and CEO of Bio-Sense, told ISRAEL21c. “If the postman comes in every day week after week the dog gets used to it and it’s not a threatening situation, but if the postman comes for the first time, or someone else tries to enter that would not normally come in, then the dog barks the alarm bark.

“Dogs have a specific bark when someone threatens their space. It doesn’t matter what breed of dog they are, how big or small, or what sex, all that matters is that they bark in response to a threatening situation. An alarm bark is always the same.”

Using dogs as guards is nothing new. They have better night vision than humans, a sense of smell that is 50,000 times greater than man, and a sense of hearing 20,000 times greater. The problem, however, is that humans do not always understand a dog’s bark, often dismissing the barks as unimportant or insignificant ? the response to a cat perhaps, or another dog passing nearby.

Zehavi, a passionate dog lover, came up with the idea for DBS while he was serving in the army. A technology specialist, he often worked at bases that were guarded by dogs. He soon discovered, however, that though the dogs were barking, break-ins still occurred because no one was there to hear them. “We decided to close the gap,” says Zehavi.

He began researching the subject and discovered that dogs bark differently in response to different situations, and that these barks are recognizable across the species. “If a dog or its owner is threatened they alert their pack that there is a danger,” says Zehavi. “Through algorithms we learned how to identify the sounds.”

Zehavi founded Bio-Sense in 2000. Since then the company has received $1 million in funding from venture capital firm, Ma’ayan Ventures, and from the Office of the Chief Scientist. Mass sales of its product began this year, and break-even point will be reached in a couple of months says Zehavi.
Bio-Sense began selling its first version of DBS a few years ago to the Israel Ministry of Public Security and the Israel Defense Forces, notably to guard prisons, military bases and other sensitive locations.
“We wanted to prove ourselves in a maximum security environment,” says Zehavi. “We had to pass many operational tests, which we did successfully. It gave us a seal of approval from the high security authorities. If we could make it there, then the system was battle proven.”

From there, the company has begun offering its solution to the commercial sector, again targeting the Israeli market first. Today Bio-Sense, which employs 10, offers a full service solution. It finds and trains the dogs, installs them, takes care of them every day, and connects DBS to the customer’s security system.

“What this provides is a strong security solution at less than one third or even a quarter the cost of human guards,” says Zehavi. “As far as being cost-effective, for homeland security it’s a must. DBS gives you very high security at very little cost.”

The company’s next goal is to move into the private sphere. Already the company’s technology is being used successfully in a few dozen Israeli homes, and Bio-Sense aims to start selling the technology in the US late in 2007, at the same time that it plans to move into their commercial and security sectors. The home DBS product will cost in the region of $150.

“A system like this makes sense to the private sector,” says Zehavi, who uses the system on his own pet dog to protect his home. “The dogs are already there and they know what is happening in the home. What we offer is the opportunity to understand what your dog is actually saying. I feel very quiet knowing that I have this system in place. Even if all the electrical systems are down I know that my home is protected.”

The system is fully supported by pet charities. The dogs that Bio-Sense uses come from dog shelters, and most would have been put to sleep without the company’s intervention. “We save the lives of hundreds of dogs every year. We find them a good home, take care of them every day, and give them a good life,” says Zehavi.

The company is now looking for strategic partners in the US and Europe. It is all also undergoing a new round of fundraising and aims to raise $3 million. In the future, the company plans other products that also decode a dog’s bark to help dog owners understand their pets better than ever before.