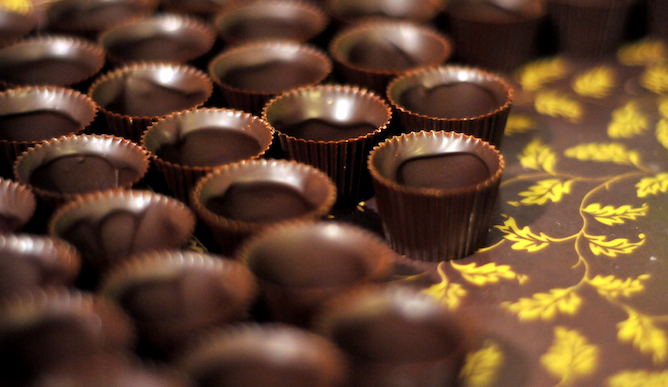 Chocolate from Sweet and Karem. Photo by Flash90
The culture of chocolate in Israel was shining brown specks at the International Chocolate Awards in Florence, Italy recently. Ika Chocolate and Bruno Chocolate took three top prizes at the 2014 European plain/origin bar Semi-final and European Open competition at the Palazzo Gaddi.

Tel Aviv’s chocolatier Ika Cohen – who won a bronze medal for a lemon praline in 2012 — won a gold medal in the flavored dark ganaches and truffles category with a Za’atar Ganache.

“It was a praline that was talked about a lot, because most of the judges were not familiar with za’atar. They liked the way the salt balanced it and the harmony of the praline,” Cohen told Haaretz.

Meanwhile, Yulia Freger of Bruno Chocolate came home with two silver medals for her Mumbai Crunch and Halvah Cream pralines in the “ganaches and truffles with mixed dark/white/milk for coating and fillings” category.

The International Chocolate Awards is an independent competition recognizing excellence in fine chocolate making. The gold, silver and bronze winners will now take part in the World Final at the end of October.

UNCOVER ISRAEL - Get the ISRAEL21c
Weekly Edition free by email
Sign Up Now!
Bring Israel's story to life.
Millions of people around the world rely on us to gain a deeper understanding of Israel. We are the trusted source for original content you won't find anywhere else.
You can make a difference. Donate today to support journalism that brings Israel’s story alive.
SUPPORT ISRAEL21c
Read more on:   News, Chocolate