On his 16th birthday, Ilya Grad decided to seek a positive outlet for his restless teenage rage.

He abruptly came in from the Jerusalem streets, leaving his drinking and brawling days behind and beginning anew under the tutelage of Benny Cogan, president of Israel’s Thai Boxing Federation.

Soon to turn 26, Grad was recently crowned the 2013 World Muaythai Council (WMC) World Champion. He relocated to Thailand in 2007 to become a serious contender, but he has continued proudly to represent Israel.

And he hasn’t gotten into a single fight – outside the ring – in those five years.

“I was lucky because Benny Cogan had a boxing gym in Jerusalem,” Grad tells ISRAEL21c in a Skype conversation from Bangkok. “I came to him and said, ‘I want to be a fighter.’ He put me through hell for the next couple of months just to test me and see if I wanted to keep going.”

Thai, or Muay, boxing appealed to Grad because it allows fighters to use their arms, elbows, legs and knees. This martial art form began in Thailand as a close combat battlefield technique, becoming popular in the 16th century. Rules and regulations were introduced only in the 1930s. 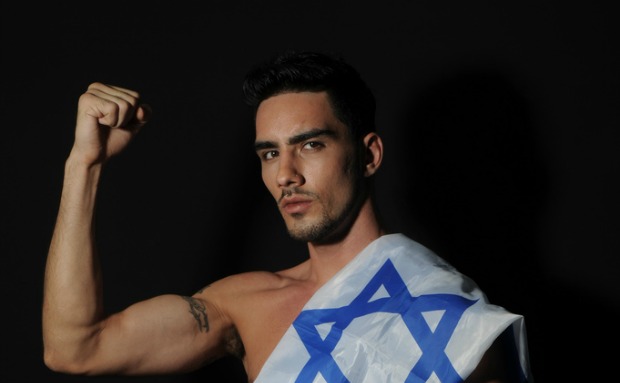 After three months, Cogan entered Grad in his first fight. He bested his opponent in just 12 seconds. “That is my record, and I never broke it. From then on, I knew I had chosen the right sport,” says Grad, who went on to captain the Israeli Thai boxing team and to win a string of gold medals in Israel and Europe.

Though his fight nickname is “Achilles,” Grad is usually called to the podium as “Israel” since he represents the country to which he and his parents immigrated from Russia in 1991.

“They call you by country and not by name, so it’s ‘Israel vs. Thailand,’ for example, and when I win they play Hatikva,” Israel’s national anthem.

However, though Grad represents Israel he receives no government funds. He supplements his income as a personal trainer and as a model in Asian print ads, music videos and TV commercials.

In April 2012, international Jewish e-zine Shalom Life ranked Grad No. 1 on its list of “the 50 most talented, intelligent, funny, and gorgeous Jewish men in the world.”

“He’s won many medals and tournaments, and continues to shock the world with his remarkable skill at such a young age. Look out for Ilya in upcoming Muay Thai fights … or if you’re not into fighting, just look at him!” the site proclaimed.

Grad hopes the publicity will help him attract not a wife, but a sponsor. Even though he has gone pro, he is in need of solid financial backing to further his fighting career.

In 2010, Grad ranked as one of the world’s eight best amateur Thai boxers and qualified to participate in the inaugural Sport Accord Combat Games in Beijing. He has another shot at that tourney this year in St. Petersburg, having just won an April bout in Singapore.

Grad won the gold at the International Federation of Muaythai Amateur (IFMA) Asia championships in 2010, and in 2012 was crowned WCK International Champion. That year, he made the semifinals in the Kings Trophy and Toyota Cup events.

He won another kind of fight in 2011, by gaining permission to enter Malaysia on his Israeli passport. He had been invited to participate in The Challenger Muaythai reality show featuring various contenders from several Asian countries. But when he arrived at the Kuala Lumpur airport, he was detained for 25 hours because Malaysia officially bans Israelis from entering the country.

Finally, through some high-level negotiations, Grad arrived at the studio. Contrary to the TV producers’ wishes, he insisted on carrying the Israeli flag into the ring, and the audience booed. He lost the bout in a split decision that he suspects was politically motivated. Later, he says, some of the spectators came over to apologize and to say they thought he was the clear winner. 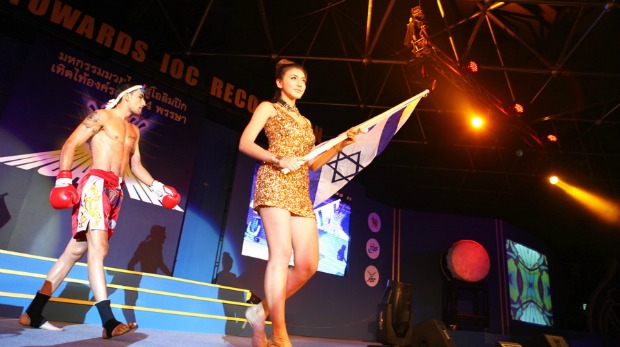 Grad being presented at the Kings Trophy match in Bangkok last year.

The recent WMC world championship has taken away the bitter taste from that experience.

“I had a shot at the title two years ago and made it to the semifinals,” Grad relates. “This year they invited me back to Hong Kong to compete again. That was a big moment for me, having a second chance. I had put so much into it, and when it comes back to you it’s amazing.”

The federation includes 128 member nations. Grad fought bouts against opponents from Germany and from Malaysia, knocking each out in the second round.

No longer an amateur, Grad maintains a strict daily regimen of running and training. “In between I also train others — not fighters, but people who enjoy the sport and want to lose some pounds,” he says.

Though he misses his family, his dog and his daily serving of hummus, Grad cannot say when or if he will come back to Israel for more than a visit.

“I want to keep doing what I do best, and I want to open a school for young kids like myself who see sports as something that can change your character and your life,” he says. “That would be a struggle in Israel, but at the same time I would like to return someday.”