With another typhoon forecast to hit the Philippines after the weekend, an Israeli-led medical relief team stationed there, is prepared for anything. 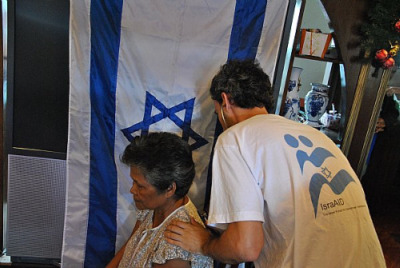 Photo courtesy of IsraAID
An Israeli doctor working as part of a relief team sent by IsraAID to the Philippines treats a patient.
As the Philippines braces for yet another potentially lethal typhoon in the wake of a series of already deadly storms, Israeli aid workers continue to provide much-needed medical relief to thousands of people in affected areas.

The seven doctors and nurses comprising the Israeli team headed to the Philippines early this month to provide relief to the storm-battered country, where severe flooding in the wake of Typhoon Ketsana and Parma left at least 930 people dead.

On the advice of the UN, the team, organized by IsraAID, first stationed itself in the Luzon region, which was badly hit by flooding and landslides, to dispense medical relief to the thousands of people affected by the two typhoons. The team offered medical assistant to some 300 people a day.

Then late last week, the Israeli relief team was sent on high alert to the capital city of Manila after meteorology reports cautioned that another storm – Typhoon Ramil – was on its way to the archipelago.

“They are back in Manila as a safety precaution and are continuing to work in the surrounding areas of Manila which are still flooded,” Shachar Zahavi, chairperson of IsraAID tells ISRAEL21c.

Other than the change in location, “the activities were the same,” says Zahavi. “They are giving medical assistance and treating people.”

“We barely sleep five hours a night,” says Elad Seker who heads the IsraAID team now in Manila. “We wake up very early and travel by trucks and then boats to remote flooded areas to treat thousands who are waiting for our assistance. After a long day of work in the field we go back to the warehouse to pack medicine for the next day.”

Typhoon Ramil was later downgraded to a tropical storm and eventually turned away from the Philippines, which is home to 92 million people.

Now, however, a new storm could be heading for the region, according to the US Navy Joint Typhoon Warning Center.

The storm is expected to strengthen to become a typhoon with winds of 120 kilometers per hour and approach Luzon after October 31.

Zahavi says that bizarre weather events are not uncommon in the Philippines and other parts of Southeast Asia.

Prepared for the worst, the Israeli relief workers are bracing themselves to jump in if a new typhoon does strike the country. IsraAID plans to send in a second relief team this week to replace the team which has been on duty now for about two weeks.

“We won’t stop with the medical help,” says Zahavi. “But we will think on how to work [in the Philippines] in the longer run. We don’t know. What happens will depend on need. It could range from rehabilitation projects to anything else.”

IsraAID is equipped to help. The umbrella organization gathers Israeli professionals from 17 different relief and activist organizations. Since each organization has its own specialty, it is easy for Zahavi to assemble a team to meet the various needs that surface following emergencies, as well as the long-term care requirements of the countries hit by natural disasters.

While the amount of aid seems small in comparison to the kind of relief that the EU countries or America can provide, the effects of IsraAID don’t go unnoticed.

Thousands of people have already been examined and cared for by the Israeli professionals. “We get a lot of praise from the local mayors and from the different priests and bishops,” Zahavi recounts.

“It’s very hard and we are tired, but also feel rewarded that we have the chance to help so many people and that they know that we are here on behalf of Israel and the Jewish communities,” admits Seker.