It wasn’t any rare Israeli earthquake, or his stint in the army as a tank commander, that inspired Tamir Niv to design a low-cost tool for digging survivors out from under the rubble.

It was two winters ago, when Japan was ravaged by a tsunami and America was facing some of its worst tornados on record, that Niv had his Eureka moment on how to invent a simple tool to save lives before and after emergency assistance arrives.

“It was the winter of many natural disasters,” 30-year-old industrial design student Niv tells ISRAEL21c: “I could see what was happening in the news and learn from it. Looking at all the images and reports from the US and Japan, I saw that many of the buildings were constructed from wood –– light construction. This is unlike in Israel, where everything is made from cement.”

This unlucky winter inspired him to fulfill a challenge — industrial design for a natural disaster – presented to his class at the Bezalel Academy of Arts and Design in Jerusalem. 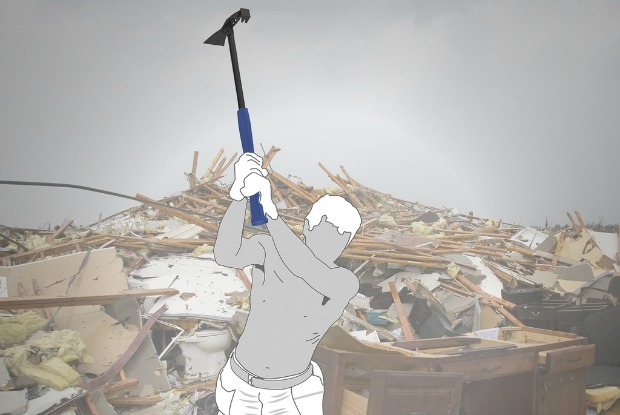 Here’s another use of the versatile tool.

Warmly received at 2012 Milan Design Week in April, the invention was praised in design newspapers around the globe. One of its best practical features is that it could be manufactured easily and cheaply on site, on demand, soon after disaster strikes, Niv tells ISRAEL21c.

Made for the people

Putting the basics found in any firefighter’s toolbox into one device, the MultiTool comes fitted with a shovel, hammer, crowbar, hook and wire cutters. Adjusting the head sets the different functions into action, much like a Leatherman or Swiss army knife. 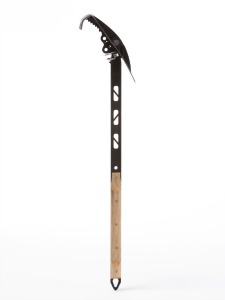 “Actually this tool is not designed for breaking cement and lifting up tons of weight,” says Niv.

“It’s made so that one person, a rescuer or just a civilian, with this tool can go in and … really save people under the ruins. This is a situation where there are so many people in need and only a few people around that can help. It could be like a fire extinguisher for every home, but you don’t have to carry around heavy equipment. It weighs around seven kilograms.”

The MultiTool, still in the prototype stage, can even offer more than basic cutting, pulling and digging functions. When you lock two of them together, they can become a winch, a large set of pliers or a small crane, says Niv.

Now in his fourth year of studies under Haim Parnas, Bezalel’s industrial design department head, Niv is hoping to collaborate with a company or investors in bringing the MultiTool to market.

Part of a collection of disaster design from Israel

Made from laser-cut and welded steel, the MultiTool’s H shape can be assembled from existing parts or can be extruded from new materials, with no need to have it shipped in from elsewhere. 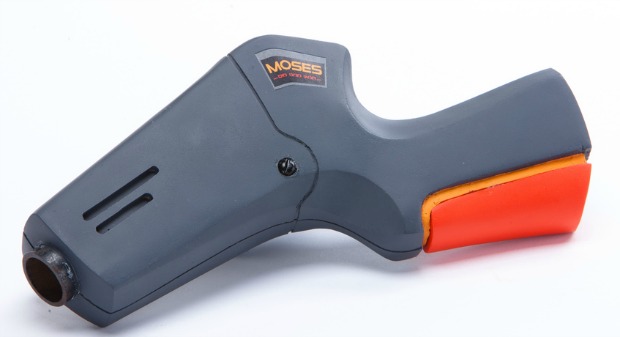 Another Bezalel design student, Tami Gurevich, invented this “gun” to open water tanks in an emergency.

“If Israel’s giving help to countries in need, maybe they can give this tool as part of the solution as well,” Niv suggests.

Niv did his homework before making his design. “I went to the fire department, read a lot – did research about it. I saw the tools they are using and what’s needed at disaster sites.”

While the 5-in-1 MultiTool won the most media attention for the Bezalel booth in Milan this year, there were a couple of other creative disaster-relief projects to come out of Israel’s prestigious art and design school. 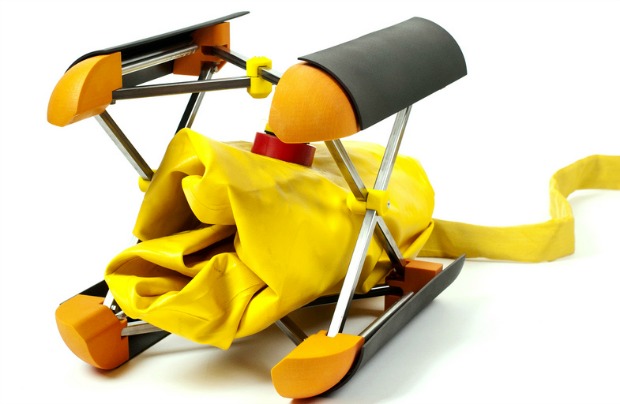 Idan Raizberg displayed his Earthquake Catheter, which acts like a massive stent allowing victims or rescue workers a safe exit or entry point at a disaster area. Tami Gurevich’s Moses “gun” can shoot holes into home or business water tanks to access fresh water when basic amenities are cut off.

As for Niv, he is now working on designing furniture for very small living spaces — a design challenge for environmentalists and urbanites alike.