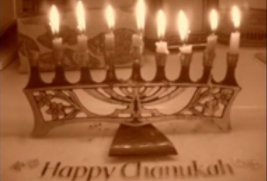 Back in 1994, Adam Sandler got things rolling with “The Hanukkah Song” .

The American reggae and alternative rock singer Matisyahu was another big-name star to add a Hanukkah song (“Miracle”) to the eight-day holiday’s playlist.

“There are so many Christmas songs out there. I wanted to give the Jewish kids something to be proud of. We’ve got Adam Sandler’s song, which is hilarious, but I wanted to try to get across some of the depth and spirituality inherent in the holiday in a fun, celebratory song,” Matisyahu said back in 2010 when he released the song.

Since then, social media has exploded with Hanukkah themed music videos.

The Technion-Israel Institute of Technology has released a new Hanukkah video. The Schulich Faculty of Chemistry has never been so in tune:

An American youth leader posted a Hanukkah rap song on YouTube recently. It’s hilarious in its cheesiness but fun to watch just the same:

The most popular Hanukkah music videos are not the new ones. The Maccabeats’ “Candlelight – Hanukkah” continues to pull in the hits:

As Hanukkah falls on American Thanksgiving this year, a new holiday of sorts has been created. Thanksgivukkah has spawned numerous parodies. Hands down, the best of the bunch is “Oils — A Thanksgivukkah Miracle” (“Royals” song parody) by the Chicago-based Big Teeth content crew.

And yet, with all the creativity on social media, the Hanukkah playlist still remains faulty. The Wondering Jew offers up a long-lost “Failed Hanukah Classics” album that is worth four minutes of your time:

UNCOVER ISRAEL - Get the ISRAEL21c
Weekly Edition free by email
Sign Up Now!
Bring Israel's story to life.
Millions of people around the world rely on us to gain a deeper understanding of Israel. We are the trusted source for original content you won't find anywhere else.
You can make a difference. Donate today to support journalism that brings Israel’s story alive.
SUPPORT ISRAEL21c
Read more on:   Hannukah, Maccabeats, The Hanukkah Song, Matisyahu, eight days, Adam Sandler, hanukkah, Spotlight in Israel