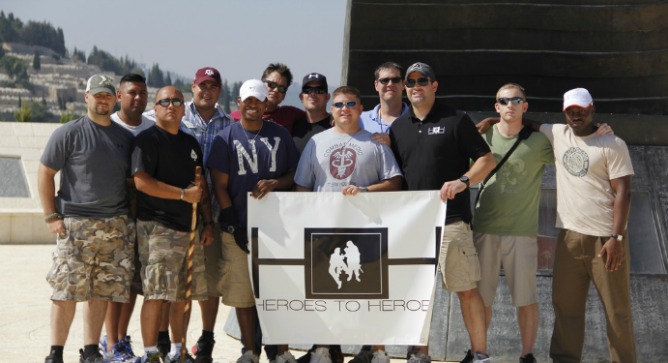 The 10 team members and two coaches of Heroes to Heroes 2012 visiting the 9/11 memorial in Jerusalem. Photo by Eilon Levy.

The pressure sleeve on Harrison Manyoma’s arm relieves the physical wound he received in combat in Iraq. For relief of his emotional wounds, he came to Israel.

“I’ve only been here five days so far and I feel at peace,” says Manyoma, a 35-year-old Houston US Army veteran who was injured during a 2004 tour of duty. “I have been able to interact emotionally while at the same release things that have been in my heart and my spirit.”

Manyoma is one of 10 former soldiers suffering from post-traumatic stress disorder (PTSD) or traumatic brain injury (TBI) visiting Israel from August 30 through September 9 with the American charitable organization Heroes to Heroes.

Founder Judy Schaffer of New Jersey explains that Heroes to Heroes Journey to Israel is designed to educate, motivate and stimulate discussion and bonding between American disabled veterans and Israeli peers, as a springboard for emotional and spiritual healing.

“It’s a way for them to hash out their experiences with people who understand them and are basically fighting the same war but on a different front,” Schaffer tells ISRAEL21c. “There’s an instant feeling of camaraderie despite language differences. They want to help each other and work together.”

Participants aged 25 to 42 are visiting holy and tourist sites, memorials and facilities for disabled veterans. They talked with Israeli leaders – including an unscheduled half hour chat with Prime Minister Binyamin Netanyahu, who wrote on his Facebook page, “I met today with a group from Heroes to Heroes that arranges encounters between Americans and Israelis who were wounded in combat. In the course of the meeting I told them: ‘This for me is a very moving moment because you are the greatest freedom fighters. You share the same experiences, defend the same values and face the same threats.’”

Halfway through their trip, participants and their coaches were already describing tangible changes.

“We’re watching people make remarkable strides in just a few days,” says Schaffer. “One member of the team told me that his battle buddy, who is with him, never shares his feelings about being shot in Iraq, but he shared with their Israeli roommate the first night. That was huge.”

The vets find a level of comfort among Israelis that is often lacking at home. Virtually everyone they speak to, including therapists, is a fellow veteran.

“In the United States, less than 1 percent of the population serves [in the military], so we don’t have as good a hold on our own history and there is a great lack of respect for veterans in our own communities,” explains Corey Gibson of Indianapolis, who was a flight medic and triage nurse in Iraq and “fell in love with Israel and the program” after participating in the first Heroes to Heroes last year. He went along this time as a coach.

“A lot of the guys have taken to the sprit of community and service that all Israelis have,” says fellow coach Nicholas Auletta, a West Point graduate who did three tours of duty in Iraq. “Everyone is watching out for each other here. Everyone has served and has a lot of pride in what their country is about.”

An immediate sense of relief

Manyoma told ISRAEL21c that he was looking for a spiritual lift, and he has not been disappointed.

“The highlight that touched me the most was seeing the birthplace of Jesus. I never in a million years expected to be in Bethlehem,” he says. “And at the Western Wall, we all wrote a note [to put into the cracks] and I lay my hands on it and prayed. There was an immediate sense of relief, something I’ve never felt before. Being on this trip with Heroes to Heroes, I feel one step closer to my own identity.”

“Being a combat veteran with PTSD, I try to find ways to deal with that, and faith is the biggest focus for me, as for probably the majority of the group,” says McBride, who served with the 82nd Airborne Division in 2003 in Iraq. “One of the biggest things I was hoping to get was a deeper understanding of my faith and to take that to the next level. Seeing holy sites, memorials and museums gives you deeper sense of purpose. There’s a holy aura here.”

Gibson explains that combat often triggers a spiritual crisis as soldiers try to reconcile their beliefs with the things they witness. For him, Heroes to Heroes “gave me some closure and reintroduction to where I came from. It showed me the way Israel treats its veterans and takes care of them, and pointed to some areas in our own system where we could do better to nurture these guys emotionally and physically.”

Schaffer gets referrals from all branches of the US armed forces, and demand is high. For many disabled vets, she says, “Israel is the only place in the world that can help, and in a short period of time. We see how much Israel is a healing place, so we’re hoping we can bring five teams a year. It all depends on funding.”

Supported mostly by private donors, Heroes to Heroes requires participants to pay only for incidentals and lunches on their Israel Journey.