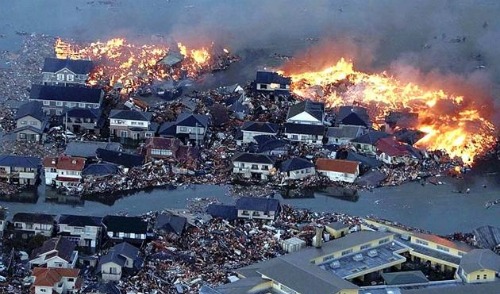 A small team of Israeli aid workers are on their way to Japan to see in what ways they can help the earthquake-stricken country.

“We are sending a small group on its way to assess what can be done,” was Sunday morning’s dispatch from Shachar Zahavi, the founder and coordinator of IsraAID, the Israel Forum for International Humanitarian Aid.

Zahavi’s statement came in response to the national emergency in Japan, hit on Friday by a massive 8.9-magnitude earthquake. The earthquake set in motion a 20-foot tsunami and has caused massive destruction and loss of life in coastal towns in Japan, as well as its capital city, Tokyo. To make matters more perilous, the Fukushima nuclear reactor north of Tokyo is hanging by a thread as local authorities try to prevent a complete meltdown.

Some 1,800 people are reportedly dead from the earthquake and tsunami, and 10,000 are still missing. Some 200,000 people in the area of the Fukushima plant have been evacuated and have been ordered to take iodine pills to counter radioactivity, while some 160 may have been affected already, according to media reports Sunday.

While superpowers like the United States are stepping in to provide immediate relief, it’s too early to say what Israel’s role will be in helping Japan, but Zahavi tells ISRAEL21c that his organization is assessing ways in which it can help. A small Israeli crew is expected to leave Israel for Japan immediately to report back where their help can best be applied.

IsraAID is a non-profit umbrella group that gathers Israeli humanitarian and relief workers from 17 different organizations to lend medical aid, search and rescue help, and disaster relief at some of the world’s biggest disaster sites, such a last year’s earthquake in Haiti.

To mobilize support worldwide, IsraAID has set up a Japan & Pacific Earthquake and Tsunami Emergency Fund.

Ready and willing to help

Israeli Prime Minister Benjamin Netanyahu pledged Israel’s assistance immediately. The “people of Israel express their deep sorrow over the tragedy in Japan, and … will work to provide any help that will be required,” he said. Israel-Japan relations first began in 1952, when Japan recognized Israel as a state. Since 1963, Japan and Israel have maintained an embassy level relationship.

According to a local report by Yedioth International’s Ynet News, the Japanese consul in Israel, Mitoshiko Shinomya, said it was too early for him to assess where Israel could help: “Israel officially offered its help an hour after the earthquake struck,” he was quoted as saying. “It is very heart-warming, but at this point we do not know exactly what the extent of the damage is, so it is difficult for us to say what can be done.”

With a unit already based in nearby Hong Kong, Israel’s voluntary search-and-rescue organization, ZAKA, said it would also send a team of volunteers trained in Israel to Japan. One ZAKA staffer in Hong Kong was expected to leave by Saturday night.

The group, whose Hebrew acronym stands for “Disaster Victims Identification,” is recognized by the United Nations for disaster relief and has worked in New Orleans after the hurricane, in Thailand after the major tsunami and most recently in Haiti. Its core experience comes from dealing with the aftermath of terror attacks and other disasters in Israel.

Israel’s experience in water management also is expected to be helpful in the coming weeks as Japan attempts to restore disrupted services. The days following an earthquake and natural disaster of this magnitude are critical – not only for rescuing those buried under the rubble, but in getting much-needed medical aid and fresh water to survivors.

As of Saturday night, there were six Israelis still unaccounted for in Japan – five business people and a tourist. Communications systems have been knocked out, making it hard to establish contact via phone or email in some regions.