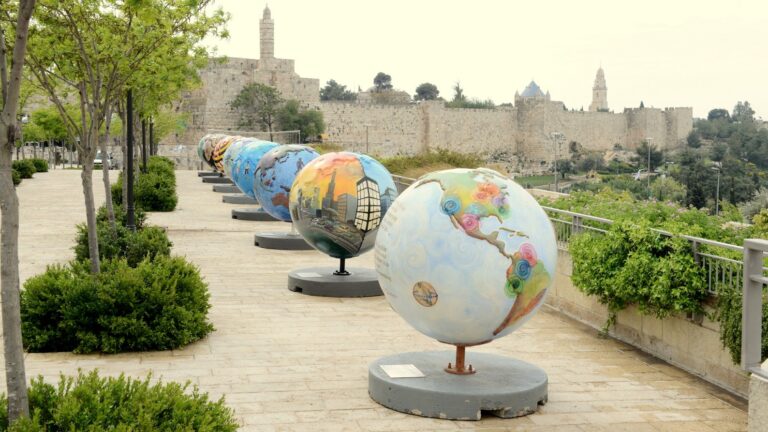 Cool Globes in Jerusalem: Each of the18 oversized Cool Globes artistically showcases a different solution to climate change – from solar power to rooftop gardens, green buildings to fuel efficiency.

Israel will celebrate Earth Day with a whole slew of sustainable events this week.

The First International Jerusalem Symposium for Green and Accessible Pilgrimage, now underway, is a five-day happening that encourages travelers and pilgrims to put their green foot forward.

Earth Day events will officially kick off with the ribbon-cutting ceremony of Cool Globes, an international public art exhibition on view in Israel for the first time, later this evening. It is an initiative that aims to raise awareness of climate change via these attractive art exhibits and encourage the public to take environmental action.

Energiya Global is sponsoring the world’s first full-length movie screening powered by solar energy. Solar pioneer and Energiya CEO Yosef Abramowitz – who will be the first Israeli to appear on CNN’s ‘The Next List’ – will be on hand to introduce the film. The ‘Next List’ recognition follows CNN naming Abramowitz in 2012 as one of the planet’s six leading Green Pioneers and being recognized as “Person of the Year” by the 2012 Israel Energy and Business Convention.

Other speakers taking part in the green symposium this week include Dr. Laurence Brahm, founder of the Himalayan Consensus Institute and the Shambhala Serai Group; Kusum Vyas, founder of the Green Kumbh movement; Wendy Brawer, international Director and Founder of the New York-based Green Map Organization; and Deirdre Shurland, coordinator of the Global Partnership for Sustainable Tourism at the United Nations Environmental Program.

UNCOVER ISRAEL - Get the ISRAEL21c
Weekly Edition free by email
Sign Up Now!
Bring Israel's story to life.
Millions of people around the world rely on us to gain a deeper understanding of Israel. We are the trusted source for original content you won't find anywhere else.
You can make a difference. Donate today to support journalism that brings Israel’s story alive.
SUPPORT ISRAEL21c
Read more on:   News, Jerusalem, Israel, Environment, Earth Day, green, solar power