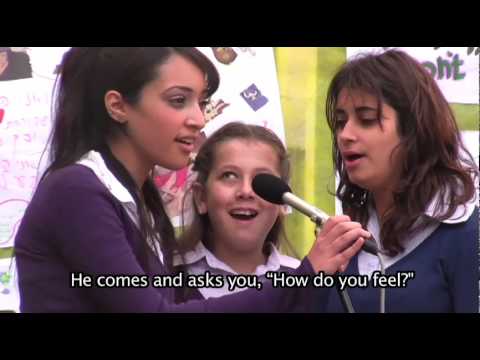 Operation Respect teaches children to express their feelings and resolve conflicts creatively. It just launched in Israel, with the visit of its founder Peter Yarrow, of the folk trio Peter Paul and Mary.

It’s Israel’s newest operation: respect. Operation Respect: Don’t Laugh At Me is an American educational initiative that has seen great results in 22,000 schools in the US, Hong Kong and Croatia. Now it hopes to repeat that success in two Jewish and two Arab schools in Israel as part of a pilot project.

Iman Huni, a Muslim Arab from Jaffa, says: “When Peter came and sang the song Don’t Laugh At Me the first time, it was the first time that I felt that someone wanted to make peace starting from within the person himself. He comes and asks you, “What do you feel? How are your feelings?” instead of just coming and saying that we need to change the world – without giving you a starting point.”