Israelis are pretty passionate about their dairy products. So important is cottage cheese to the average Israeli that the price of the product was the poster issue for the Israeli social protests three summers ago.

But Joshua Miron, head of the Ruminant Sciences Department at the Volcani Center in Israel, says his work is much more than about a love for milk.

The Volcani Center is a government-run research institute that investigates everything related to the agriculture industry, including dairy cattle. Miron showed ISRAEL21c his cowshed laboratory, a high-tech outdoor facility that waters, protects, feeds and milks 230 milking cows in the village of Beit Dagan, about 20 minutes south of Tel Aviv.

Delegations from far and wide come to see the Israeli closed-loop cowshed ecosystem. In a typical month, you might see delegations of dairy farmers from Thailand, France, or Russia coming to the Israeli research center, which looks like a big farm.

From feeding cows “recycled” vegetarian food byproducts, to growing fodder on recycled water and returning the manure to the fields, Israel has become a model for the world’s dairy industries despite a lack of water and arable land.

Israeli dairy farmers and their support network at the Volcani Center looked at the size of Israel –– about as big as the state of New Jersey –– and created a new closed-loop system that helps the milking industry better integrate into the values of Mother Nature.

Government and private funders put together $1 billion to revamp the dairy industry in Israel. What’s come about are some unique achievements like special bedding in the cowshed to prevent aquifer water contamination, and adding food industry byproducts to cattle feed to reduce the end cost of milk. 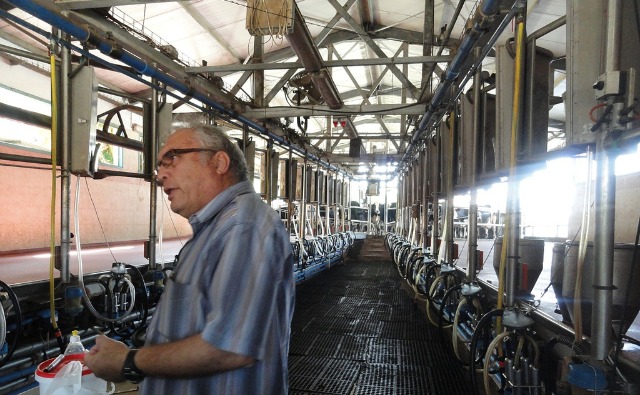 Joshua Miron, head of the Ruminant Sciences at the Volcani Center.

Fodder grown in Israel comes with a lot of tough lignin. So Volcani has developed measures for growing this kind of feed in hot climates using salty recycled water, which cannot be used for vegetables. The center’s special formula ensures the cows still get the nutrients they need.

Water is an important consideration.

There are only 1.5 billion cubic meters of water available for people in Israel annually, leaving 300 million cubic meters for crops. Only trees, non-food crops and food grown for animals can be irrigated with recycled water, which may have high bacteria loads and lots of salt.

A Volcani-assisted product from AfiMilk can monitor a cow real time to make sure her milk is free from infection and with the right protein and fat components. The same system can also help monitor the general well-being of the cow.

Not all of the projects you will find at the Volcani Center were innovated in Israel, like the mixed-feed projects, which is based on US research. But the Israelis had to adapt these inventions to meet the challenges of the Israeli climate.

“We had to update it to the Middle East environment, which produces forage with poorer quality,” says Miron, as the cows chew behind him in an open shed kept about 10 degrees cooler than the ambient air with fans and misters.

Developed nations are interested in Israel’s efficiency in the dairy barn and the way its high-tech systems monitor the health of the animals, along with Israel’s nutrition system, says Miron.

He doesn’t yet have a solution for the high price of cottage cheese. “The problem was not the price of the milk charged by the ‘poor’ farmers because for the last seven years they have not raised their milk a cent from NIS 2.2 per liter. After a simple process of pasteurization and bottling, the same milk costs NIS 8. The supermarket is creating this gap. And this is the problem,” he tells ISRAEL21c.

As for organic milk in Israel, Israel has a long way to go. Harduf with its 200 cows is the only organic dairy in Israel, and the demand for organic milk remains low, says Miron. But better methods for handling organic-designated cows can be learned at the Volcani Center, he says.

“We can teach organic dairy farmers methods for producing a better industry, from how to treat the bed of the cows and using the cows in the most productive way,” Miron offers.