Ex-freedom fighters from Nigeria are being sent to an Israeli institute to learn vital skills for self-sufficiency.

After fighting big oil, ex-rebels from the Niger Delta of Nigeria have chosen to put down their weapons. Some 20,000 of them, men and women, have been granted amnesty by their government along with free land for developing agriculture.

But people who have long known only conflict and guns don’t remember how to till the soil, raise chickens or milk cows. This is where an Israel management non-profit has stepped in.

For the second time this year, the Galilee International Management Institute has opened its doors to ex-militants from Nigeria. Twenty-three arrived recently for a one-month training course as a group of 30 were heading back home, taking with them Israeli farming and agricultural expertise. The training included hands-on experience working the land, but also courses on basic farm management and business skills.

According to Joseph Shevel, president of the Galilee Institute, Israel was singled out as a successful training ground after Nigeria had sent various other groups to several countries this summer in a pilot program.

It’s not the first time Nigerians have trained in Israel. Shevel says that they’ve been coming for nearly 20 years, since Israel renewed its diplomatic ties with Nigeria in 1992. But the institute never before trained ex-rebels.

“The Nigerians’ land was taken from them by oil companies,” he tells ISRAEL21c. “Nobody cared about them. [The oil companies] kicked out the local farmers and the local farmers started to fight.” The uprising had global consequences. Whenever a rebel would blow up an oil pipeline, world oil prices would rise, says Shevel, who expects 500 more trainees in Israel next year.

Amnesty International is funding the rehabilitation of these former farmers.

Learning to earn a living

Well before Israel was established as a state in 1948, its pioneers focused on agriculture. A hallmark of Israeli life is the kibbutz, or farming cooperative. And while most of the early kibbutzim have evolved to include privatization and industry, the agricultural spirit is still a cherished Israeli value.

It was these kibbutzim that the Nigerians got to witness firsthand. The institute housed them at Kibbutz Beit Alfa and also arranged lectures, field trips and hands-on lessons on fisheries, farming and handling livestock. Shevel says kibbutzniks always warmly welcome the institute’s visitors, who have even included former Palestinian terrorists.

The latest group to Israel, which left last month, will receive follow-up support in Nigeria as they endeavor to create viable farm enterprises.

The Galilee Institute has trained people from about 160 countries over the years, including some unexpected places. Working through diplomatic channels with countries that don’t officially recognize Israel is part of the job, says Shevel, who travels on a second passport when necessary. 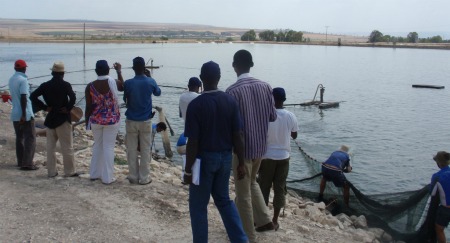 Fishing was among the professions taught to former Nigerian rebels in Israel.

Recently a group of Afghanis came to learn farming, and during one recreational evening at kibbutz they joined in an Israeli hora and taught the Israelis how to dance Afghan style. Shevel adds that the new Minister of Agriculture in Afghanistan is a former trainee. Yet Afghanistan has no diplomatic relations with Israel.

Many of the African trainees who arrive are Christian and they are eager to see holy sites in Jerusalem and Nazareth — the Galilean birthplace of Jesus that’s just a short walk from the Institute. So it’s not only a training seminar, it’s also a holiday of a lifetime.

According to the Israel Tourism Ministry, 31,750 tourists from Nigeria traveled to Israel in 2010, and this year there has been a nearly 60 percent increase.