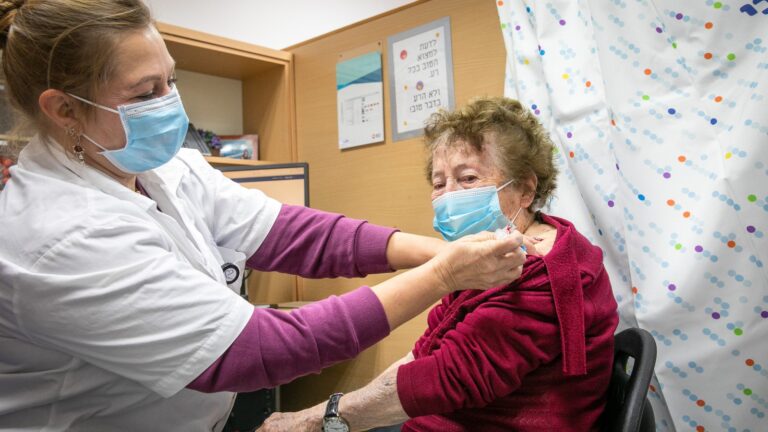 This is the conclusion of a preliminary data analysis performed by a team of researchers from Israel’s Ministry of Health, Weizmann Institute of Science, Technion-Israel Institute of Technology, Hebrew University, and Gartner Institute at Sheba Medical Center.

In early January, considering the rapid spread of the Omicron variant, a fourth dose of the vaccine was made available to Israelis aged 60 and over and to at-risk populations and healthcare workers. As of January 23, 592,510 Israelis have received the fourth dose.

The ministry said these preliminary results will be updated over time with additional follow-up data.

On January 18, ISRAEL21c reported that preliminary results of Sheba’s world-first study of the fourth dose indicate it is not effective enough against the current Omicron variant of the SARS-CoV-2 virus.

Dr. Gili Regev-Yochay, chief of Sheba’s Infectious Disease Unit, said that the second booster caused “a pretty nice increase in the number of antibodies – even a little higher than we had after the third dose – yet this is probably not enough for the Omicron.”

Regev-Yochay supports the Israeli government’s decision to offer a fourth vaccine to vulnerable populations since “it may give a little benefit. But probably not enough [benefit] to support a decision to give it to all of the population.”

UNCOVER ISRAEL - Get the ISRAEL21c
Weekly Edition free by email
Sign Up Now!
Bring Israel's story to life.
Millions of people around the world rely on us to gain a deeper understanding of Israel. We are the trusted source for original content you won't find anywhere else.
You can make a difference. Donate today to support journalism that brings Israel’s story alive.
SUPPORT ISRAEL21c
Read more on:   News, Health, Covid-19 vaccine