This year, Israel had a record showing in the Red Herring Top 100 list for Europe. Since 1996, the Red Herring awards for the world’s most promising tech companies are granted annually, with separate contests for the United States, Europe and Asia.

The term “red herring” describes something that distracts from a core topic. Here, the core topic is that a whopping 10 Israeli high-tech companies made the 2014 list.

Only the UK and France did better, each garnering 18 awards; and Finland tied with Israel. Sweden and Turkey each won eight; Netherlands, six; Italy, four; Luxembourg, three; Belgium, two; and one each for Spain, Slovenia, Ireland and Romania.

Red Herring, publisher of an innovation magazine and daily news service, analyzes hundreds of companies each year and chooses those it expects — based on the quality of their prospects, research and development, funding and other factors — to expand at a meteoric speed.

Among these candidates were 30 Israeli companies. That a third of them actually won the award is a huge accomplishment and bodes well for their future. More than 200 Red Herring winners from around the world have achieved exits over the past five years. The Israeli navigation app, Waze, won the Red Herring in 2010 and was acquired by Google in June 2013 for $1.03 billion. 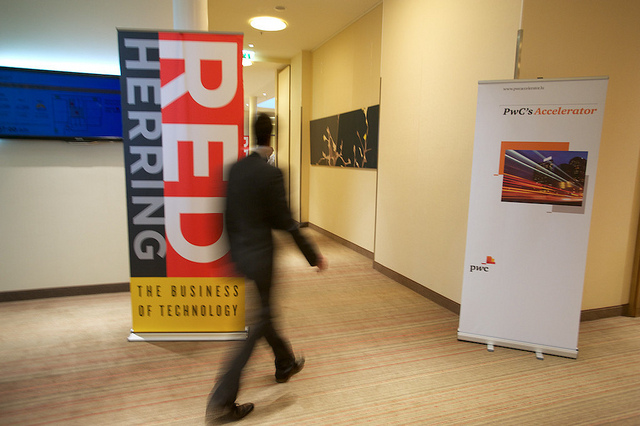 A glimpse of the Red Herring Top 100 Europe event

The award-winning Israeli companies for 2014, in alphabetical order, are:

This established Tel Aviv-based company is a leading provider of advanced data connectivity, transfer and management software solutions customized for about 800 customers in many countries – including the FBI and NASA in the United States.

Checkmarx creates software solutions for secure mobile and web applications to protect consumer data as they are programmed. It scans software source-code, quickly identifying security vulnerabilities and regulatory compliance issues, and immediately shows developers and security auditors where and how to fix them. Customers include four of the world’s top 10 software vendors and many Fortune 500 companies and government organizations, including Coca-Cola, Salesforce and the US Army.

This Tel Aviv-based cloud computing company was founded in 2011, and in 2012 was ranked by Forbes among the most innovative and promising Israeli startups. Feedvisor offers the world’s first fully algorithmic re-pricing platform, a self-learning algorithm that checks the competitive offerings of millions of products every hour, and adjusts prices in real time based on the seller’s business goals.

Founded in 2009 in Tel Aviv, justAd has a sales office in New York City for its self-service advertising platform (justAd Studio), which enables advertisers to create rich media ad campaigns for mobile and tablet devices without the need for custom coding, server-certification or testing. In 2013, customers created more than 200 ad campaigns, most of them totally self-serviced.

This company, which invented Emotion Sense Technology, enables anyone to turn private photos and video into Hollywood-style movies with a few clicks. Magisto, started in 2009 by two Israeli vision-technology experts, is driven by artificial intelligence and was integrated into Amazon Fire TV so users can build their own libraries.

With five operational sites across the globe — and reaching more than a billion mobile Internet users from 190 countries – this company is the world’s largest performance mobile advertising platform. Its TargetAdLive real-time proprietary technology offers a pure cost-per-action model. Customers include CitiBank, AIA Insurance and Gameloft, among other global brands.

This telecommunications company, founded in 2003 – now with offices in Israel, Italy, France, Spain and Turkey — helps mobile marketers manage personal and continuous engagement with their subscriber base. Its solutions support more than 300 million mobile subscribers around the world.

9. Safer Place Founded in 2011, this company is a pioneer in the field of driving-violation law enforcement. Its Automated Video Based Traffic Enforcement solution boasts of a low cost per violation caught, and also provides a video clip for legal evidence. Safer Place is said to increase the probability of violation enforcement by 100 times.