But the Israeli program Dream Doctors did blaze the trail for professionalizing “clown therapy” as a standardized, research-backed healthcare discipline. In late October, the organization will host an international congress of medical clowning associations to share the theories and practices of this unusual approach.

“My vision is that the same way hospitals hire any therapist, they’ll hire medical clowns,” says Dr. Arthur Eidelman, the recently retired chief of pediatrics at Jerusalem’s Shaare Zedek Medical Center and professor of pediatrics at the Hebrew University’s Faculty of Medicine.

A gathering of Israel’s medical clowns.

As chairman of the scientific committee for the upcoming conference, he’s eager to share Israeli research showing that putting trained clowns on the medical team leads to measurable benefits in pain relief, stress reduction and boosting immunity. Pre-surgical and post-surgical patients “treated” by medical clowns need less anesthesia before and less pain medication after the operation. In-vitro fertilization patients who are exposed to clown therapy right after implantation are more likely to become pregnant.

At least 200 medical clowns from North America, Australia, Portugal, Denmark, Germany, The Netherlands, Switzerland and France — maybe even one from Peru – are expected at the October 23-26 congress at the Ma’aleh Hachamisha Kibbutz convention center near Jerusalem, says Karin Schneid, program coordinator for the Magi Foundation, which has funded Dream Doctors since 2004.

The foundation helped set up the world’s only undergraduate degree program in clown therapy as a paramedical profession, available at the University of Haifa’s Graduate School of Creative Arts Therapies. A master’s program will soon follow. 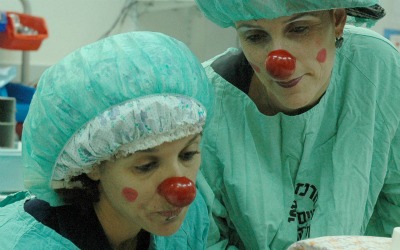 Pre-surgical and post-surgical patients “treated” by medical clowns need less anesthesia before and less pain medication after the operation.

“We are the center of the world with this model,” Eidelman tells ISRAEL21c. “I didn’t fully appreciate this till six months ago, when I started planning a convention with medical clowning associations in Europe. They sent representatives here to see what was going on in Israel, and they decided after seeing what we do that we should have the congress here.”

In many countries, he explains, “clowns come into hospitals in the afternoon, after rounds are over. Here, we work integrally together during rounds. I don’t see the medical clowns differently than any other part of the team. It’s not entertainment; it’s therapy.”

About 80 Dream Doctors work in 18 Israeli hospitals, making a unique contribution to treatment, recovery and rehabilitation – mostly for children, but also for adults in virtually every inpatient and outpatient department. They help make assessments and devise treatment plans, just like music, drama, art or occupational and physical therapists do, and they use their paramedical training to assist with various bedside procedures.

The Magi Foundation foots the bill for each clown therapist’s first year on the job. “We try to sign an agreement with every hospital that each year our share will decrease and their share will increase,” says Schneid. “In the hospitals we’ve worked at the longest, the programs are now fully funded by those hospitals.” 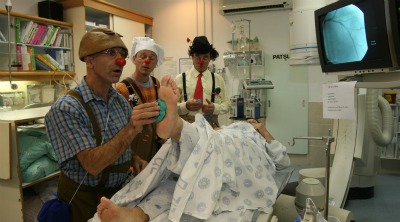 Medical clowns on the job at Rambam Health Care Campus.

That means the clown therapist isn’t an outsider but a regular staffer with regular hours and responsibilities. “Physicians don’t usually relate to this model,” says Eidelman, but he’s hoping the convention will start changing minds.

On the schedule are plenary sessions on the history and theory of medical clowning; practical workshops; and field trips to see clowns in action at Jerusalem-area hospitals. “The fact that physicians will be chairing sessions, and it’s not just clowns talking to clowns, is symbolic,” says Eidelman.

‘You have to have a great heart’

“In our organization in Israel, we try to pick mature people with families, who have experience in the theater arts and a rich world from which they can relate to the children,” says Schneid. “We encourage them to get the degree from Haifa University, and we want them to go on to a master’s as well, but it’s not a requirement. Mostly, you have to have a great heart.”

“We look for people with theater-arts skills, not just do-gooders,” adds Eidelman. “Volunteers from the community come to entertain in the hospitals around hanukah and Purim, and that’s wonderful, but they don’t understand the [medical] issues as well as people who are trained. Professionals in theater arts are very flexible and adjustable, sensitive to the dynamics of the situation and know how to have appropriate interactions.”

In Israel, where hospital roommates may often be of different ethnicities, the clown therapists not only inspire trust and calm fears, but also use their expressive abilities to bridge cultural gaps and facilitate communication across religious, ethnic and national lines.

Though the result is often giggles, it’s pretty sober stuff, notes Eidelman, who is a scientist at core. “My research has been in basic clinical care, but in a pediatric department you really see that the needs of the child and family are just as important as what’s going on in the test tube,” he says.