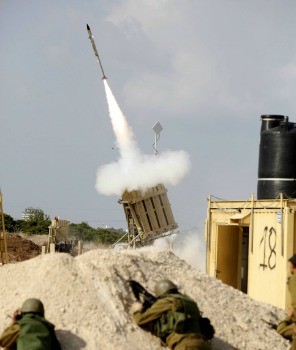 Every time Israel’s Iron Dome advanced missile interception system successfully shoots down a rocket launched from Gaza – so far, 350 have been intercepted, and counting — the development team at Petah Tikva-based mPrest Systems, and the manufacturing team at Rafael Advanced Defense Systems, have cause to celebrate not only the saving of lives but also the vindication of their project.

When Iron Dome development began around 2007, it attracted the scorn of many critics. One of the project leaders, a graduate of the Technion-Israel Institute of Technology, told the Technion’s in-house publication: “We knew that eventually our critics would get our response, which came in April when the first operational deployment destroyed eight out of eight rockets aimed at Ashkelon and Beersheba.”

Now, it is reported that South Korea may be interested in purchasing an Iron Dome battery of its own, in anticipation of possible attacks from North Korea.

Not many expected the five unwieldy-looking contraptions to become inanimate heroes of the current conflict with Hamas. But Iron Dome, which can detect and intercept rockets and artillery shells headed for population centers within a 43.4-mile (70 kilometer) range, has boasted about an 80 percent success rate.

The US government contributed $200 million toward its development in 2010, and in July Congress approved another $70 million package for further R&D.

Within a second or two, an Iron Dome installation identifies the incoming missile, calculates its trajectory and chooses the best possible interception option. The farther away the projectile is headed from its source in Gaza, the more time Iron Dome has to choose a strategy.

You can follow its successes at Iron Dome Count on Facebook and Twitter, which gets updated hourly by Ben Lang, a young Israeli serial entrepreneur eager to share the system’s lifesaving triumphs with the world.

Lang has also launched the site Israel Under Fire to simulate the stress of the 15 seconds Israeli citizens have to find shelter when the air-raid siren starts wailing.