You won’t see a word of Hebrew when you enter TechLoft, the largest and perhaps most ambitious of Tel Aviv’s new cluster of shared workspaces for startup entrepreneurs.

“The whole high-tech scene is in English,” explains TechLoft co-founder Gilad Tuffias, 35, a lawyer and business developer born in South Africa. “An Israeli guy looking for a space sends me an email in English, and when we meet we talk in Hebrew. That’s how the business world works in Tel Aviv.”

Opened in September 2011, TechLoft joins a field of startup spaces including the rooftop Hub Tel Aviv, part of a global network nurturing primarily environmental and social ventures; The Library, opened in 2011 by the Tel Aviv-Jaffa municipality for residents only; and Genesis Partners capital fund’s The Junction, with space for 30 entrepreneurs.

“There is a lot of cross-pollination here — a lot of collaboration, which is amazing,” Tuffias says. “It’s a great, vibrant community.”

TechLoft, which accommodates up to 70 pre-seed technology freelancers in the Internet and mobile sectors, is the largest of the Tel Aviv shared workspaces and is unusual in that it is open 24/7 and there’s no time limit on how long tenants can stay. A joint venture between Tuffias and electrical engineer Tal Marian, it is also the only one privately owned.

“We each encountered entrepreneurs looking for someone to trust for advice in the early stages,” Tuffias tells ISRAEL21c. “Instead of doing it on a personal level, we wanted to do it on larger scale.”

During TechLoft’s first year, more than 60 different tenants raised an accumulated $8 million. Eventually, Tuffias and Marian aim to buy a piece of the in-house startups as well.

“Our ultimate goal is to raise a few million dollars to create a TechLoft Fund and make investments of between $100,000 and $300,000 in ventures in which we are interested,” explains Tuffias. “We don’t have a vehicle in Israel to screen companies, support them and work with them to secure additional funding rounds, and we want to be that vehicle.”

The unique monthly fee structure they devised encourages growth within TechLoft. “If they are bootstrapping — using their own funds or a friend or relative’s funds – it’s quite a burden if they have a large team, so we try to help them out,” Tuffias explains.

One-person startups pay the shekel equivalent of $300; two people pay $250 each, while a three- or four-person startup pays $200 per head for seats at open tables. Private offices on the upper floor of the workspace go for $750-$1,250 per month. Tenants have access to conference rooms, two kitchens and four outdoor decks for evening networking, social events and lectures.

Tuffias and Marian could have saved money by siting their 500-square-meter space outside of Tel Aviv, or in a less expensive neighborhood, but Tuffias says the tony Rothschild Boulevard location is part of the dynamism attractive to Israeli and international venture capital funds and angel investors. 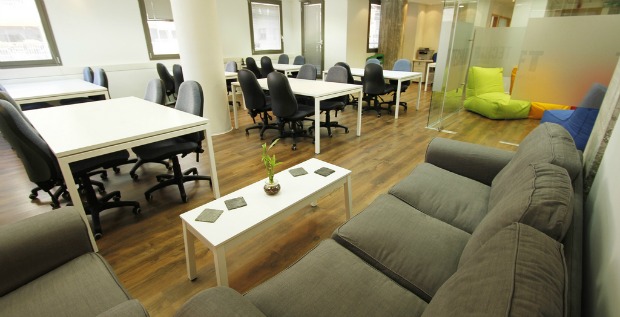 “Tel Aviv has a sexy, cool factor, so this is where we had to be,” Tuffias explains. “The Mapped in Israel site [created by young entrepreneur Ben Lang] shows you we’re in the center of the startup scene. There are hundreds in a small radius.”

In 2011, Tel Aviv-Jaffa Mayor Ron Huldai created the Tel Aviv Global City Administration to oversee a five-year strategic plan to position the city as a major center of innovation and to attract European startups.

“There’s something amazing in the concentration of the startup scene here, and how everyone knows one another,” say Tuffias. “There is a willingness to help and assist; the genuine feeling that you have to give back to each other.”

One of the “Lofters” is a year-old venture to offer online bra-fitting suggestions based on crowd recommendations. “It’s something out of the box and useful,” Tuffias says. The founder began solo, raised some capital, and now rents a third of the upstairs office space as she expands her team.

The immediate community in TechLoft served as a de facto testing ground for her concept.

“A common thread through our companies is the realization that user experience is critical from the very early stages of development,” says Tuffias. “A lot of tech companies in the past developed a product and then found no need for it. Here, they try to validate the product within the community right at the alpha stage.”