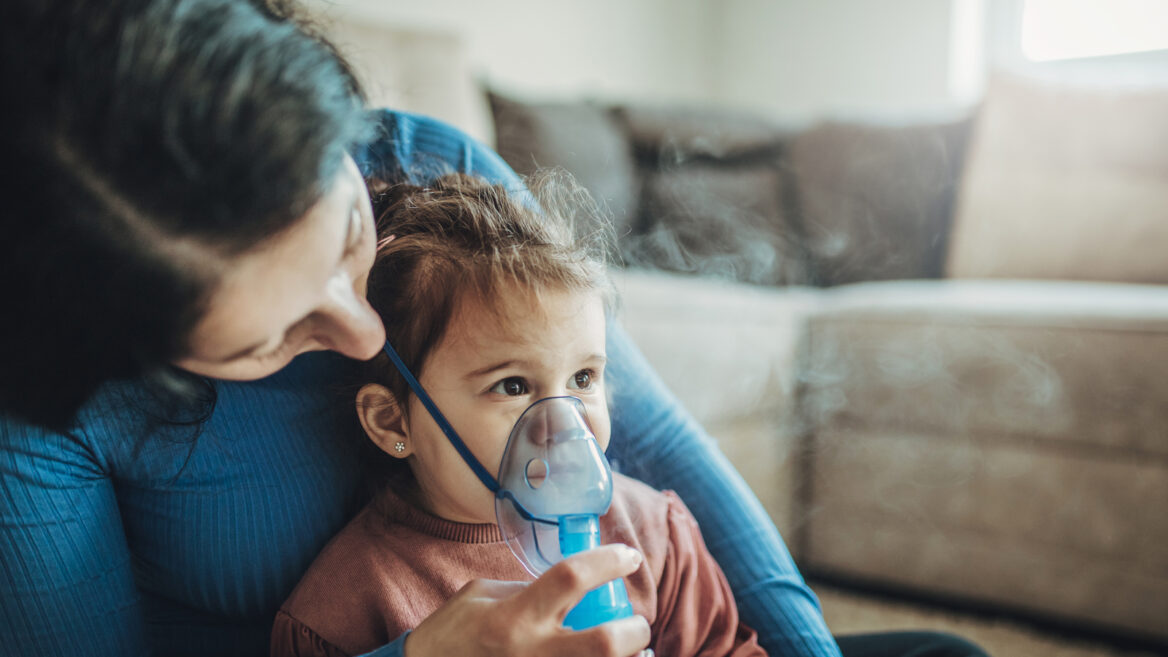 The new medication, although not a cure, works wonders for the 80 percent of cystic fibrosis patients with the predominant mutation causing the disease, called F508del.

But what about the 20% of CF patients who have a different genetic mutation? Those 18,000 or so people are the target of a new approach from Jerusalem-based biotech company SpliSense.

The company’s technology is based on a term familiar to most people these days due to the Covid-19 crisis: mRNA. 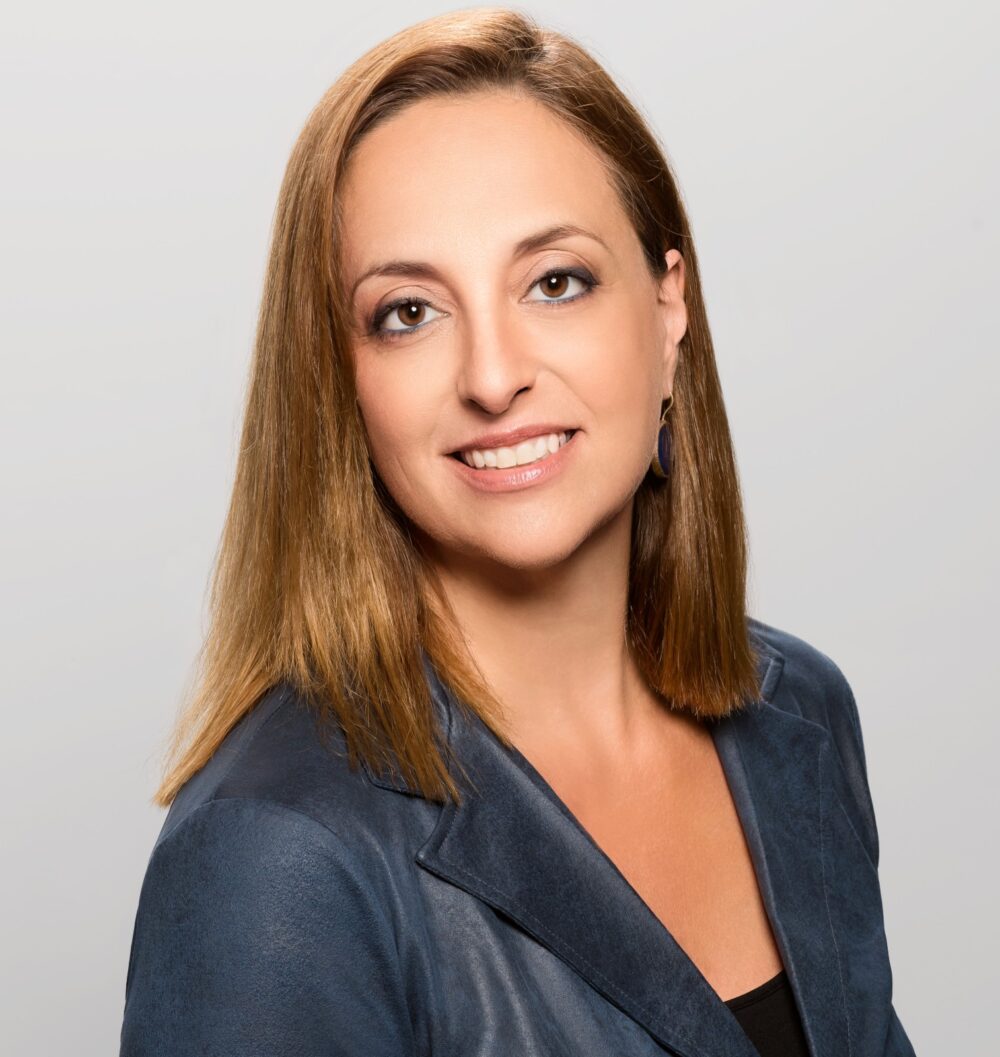 And while SpliSense’s mRNA technology is intended to address “orphan” conditions that have too few patients to warrant big pharma budgets, it can also benefit the other 80% of CF patients, Hart emphasizes.

There are approximately 2,000 variants of the CFTR gene, although only 300 cause disease. SpliSense has demonstrated in cells derived from patients that it can completely restore CFTR function.

The company is now moving on to animal models and the first human clinical trials are planned for 2022. SpliSense raised a $28.5 million Series B round in May to move the company toward trials and the development of treatments for other pulmonary ailments.

Cystic fibrosis, a hereditary disease, causes the body to produce a thick, sticky mucus that can clog the lungs and obstruct the pancreas.

People with the condition tend to have a shorter-than-normal lifespan, developing serious breathing difficulties and sometimes requiring a lung transplant in their mid-40s.

Since CF primarily affects the trachea, bronchi, bronchioles and alveoli, SpliSense’s treatment is meant to be inhaled so that it reaches the lungs quickly without any uptake by other organs or the bloodstream.

SpliSense’s lead product is based on “Anti Sense Oligonucleotide” (we’ll call it ASO for short), a synthetic nucleic acid molecule that can bind to specific sequences within target RNA molecules.

The ASO sequences are specific to the target mutation region in the RNA, so the treatment won’t affect (or damage) nearby organs and tissues. That should reduce potential side effects.

ASOs are used for a variety of applications including splicing modulation, hence the name of the company. You can see in this diagram how ASO splices in the other half of this RNA strand to create a fully functional protein. 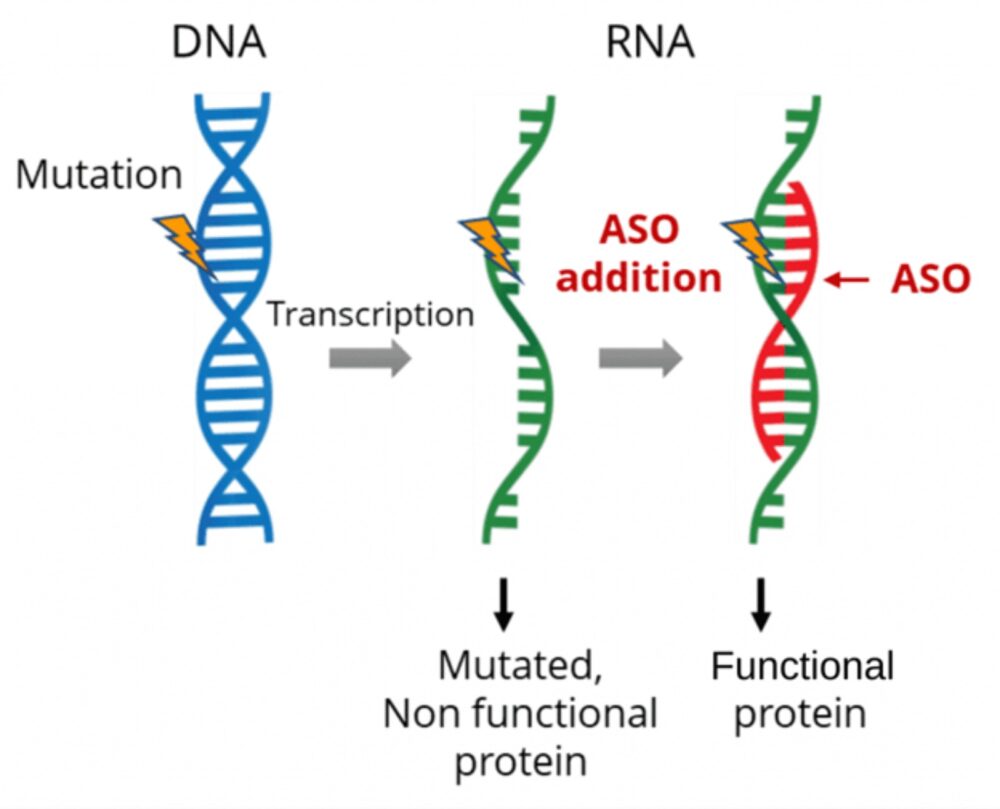 “You have an RNA sequence with a mutation,” Hart explains. “We have a unique technology and algorithm that allows us to optimize and design a sequence that’s compatible and fits the RNA sequence of the gene with the mutation. In that way, we can manipulate this area and overcome the mutation.”

Hart likens it to playing with LEGO, where you can take some parts out and bring others in to “generate a normal sequence that makes sense.”

ASOs have proven effective in treating other genetic diseases such as Duchenne muscular dystrophy and spinal muscular atrophy. This is the first time they’re being used to address cystic fibrosis.

RNA is the “instruction manual” that tells the body to generate certain proteins. So, if there’s a problem with the RNA, there will be a problem with the resulting proteins. The 3849 CF mutation, for example, results in RNA that includes “nonsense letters,” Hart explains – that’s what generates the non-functioning protein.

“Our ASOs mask this area so the nonsense sequence doesn’t enter the RNA.”

Although both SpliSense and the Covid-19 vaccines from Moderna and Pfizer use mRNA, there’s no overlap in the technologies.

“The vaccines are generating from scratch the SARS-CoV-2 spike protein in order to inoculate people, while we are trying to manipulate the existing RNA in our bodies to generate fully functioning proteins in a patient,” Hart explains.

Hart, an immunologist, received her PhD at the Weizman Institute of Science in Rehovot. She did her postdoc at Yale Medical School and returned to Israel in 2006. She then founded PROLOR Biotech, which developed“bio-better” drugs to address conditions such as growth hormone deficiencies in children.

PROLOR was acquired in 2013 by OPKO Health, and Hart became the CEO of OPKO’s new Israeli subsidiary. Hart was recruited to become the CEO of SpliSense in 2017. 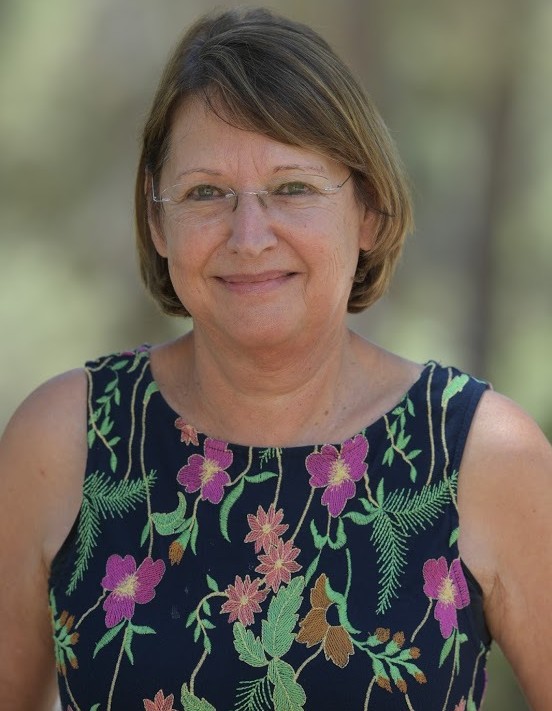 The science behind SpliSense comes from Hebrew University Prof. Batsheva Kerem, one of the team members who discovered the CFTR protein the late 1980s while she was a postdoc in Canada.

Her husband, Prof. Eitan Kerem, is an Israeli pediatrician who is a world leader specializing in lung diseases among children. “He treats most if not all the CF patients in Israel,” Hart notes.

Both Kerems are actively involved in SpliSense. The technology was licensed from the university by the Yissum technology transfer company of Hebrew University. SpliSenseis based in the biotech park next to Hadassah-Hebrew University Medical Center in Jerusalem and employs 15 people.

“Their goal is to bring treatment for every patient,” Hart says. “We’re trying to make our ASO technology work for even less frequent mutations. We have an additional five mutations for which we already have preliminary data” that SpliSense’s inhaled ASO may be efficacious.

For the 18,000 CF sufferers who fall outside the mainstream treatments, SpliSense offers the first real hope of relief. Its medication could not come soon enough.

UNCOVER ISRAEL - Get the ISRAEL21c
Weekly Edition free by email
Sign Up Now!
Bring Israel's story to life.
Millions of people around the world rely on us to gain a deeper understanding of Israel. We are the trusted source for original content you won't find anywhere else.
You can make a difference. Donate today to support journalism that brings Israel’s story alive.
SUPPORT ISRAEL21c
Read more on:   Health, SpliSense, cystic fibrosis