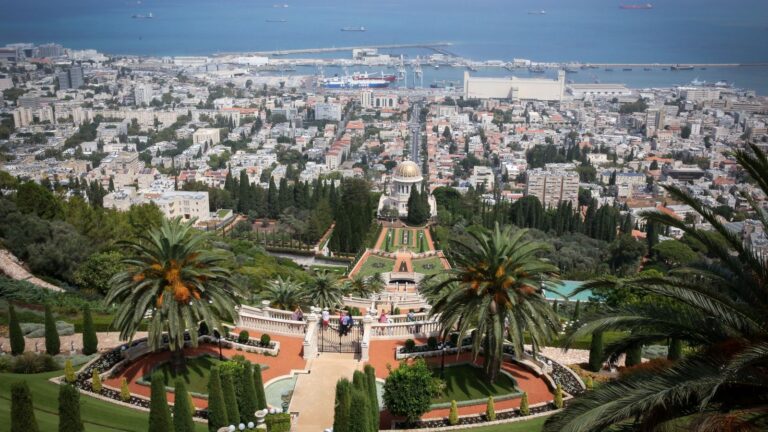 A view of Haifa Port from the city’s mountainside Bahai Gardens. (Yossi Zamir/FLASH90)

Haifa Port recently welcomed the Royal Caribbean’s Odyssey of the Seas, marking the first time a ship belonging to a major cruise line has ever docked in Israel ahead of trip set to set sail from it. The massive ship arrived in Israel to stock up before a busy summer season that will see passengers enjoying round trips to ports in neighboring Greece and Cyprus.

The ship was reported to have been scheduled to set sail from Italy this summer but was rerouted to Israel due to the global coronavirus crisis. Passengers embarking on the ship will have to be fully vaccinated, while children below vaccination age will have to present negative Covid tests. Reports in Israeli media noted that it remains unclear whether the ship arrived early in Israel to vaccinate crew members.

According to the Royal Caribbean Blog, an unofficial fan blog of admirers of the global cruise company, passengers aboard the Odyssey are set to depart each time from Haifa to travel to Athens, Rhodes, Santorini and Mykonos in Greece, as well as to the port of Limassol in Cyprus.

The cruise ship, the blog notes, comes fully equipped with two open-air pools and four whirlpools, a sports bar and arcade, an Italian restaurant and a Japanese-style Teppanyaki, as well as on-deck bumper cars.

A two-night Cyprus cruise, according to the company’s website, starts at a cost of $565, while a four-night cruise to the Greek isles during the Jewish festival of Sukkot would set you back $1,130 for a balcony room.