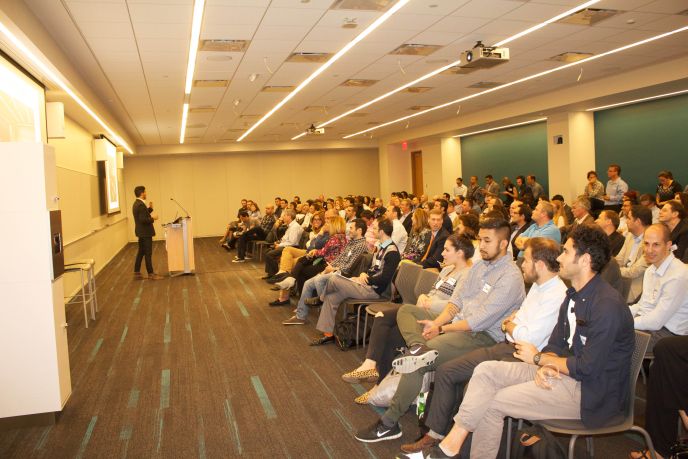 Two months later, “Brad” was on a plane to Israel to see it for himself.

“I went to the meet-up to find out more information because I was curious about what others outside of the US are doing in the tech sphere,” say Brad (for business reasons, he wants to stay anonymous for the time being). “Lior is a fantastic advocate for the Israeli tech ecosystem,” Brad continues.

“He put me in touch with a ton of VCs in Israel. During a trip to Europe for work in May, I took a side trip to talk to some people in Tel Aviv who are doing interesting things, and I met up with a bunch of companies.”

Though more than 200 Israeli tech companies operate in New York, he discovered that Israel-New York business ties are not as developed as they are in Silicon Valley, despite plentiful capital and talent in the Big Apple.

So Vaknin decided it was high time to “heat up the synergy between the Israeli and New York tech communities,” he tells ISRAEL21c.

His initial feelers confirmed that New Yorkers want to learn from their peers in the Middle East. “We have this ‘startup nation’ image and people don’t really know what it means. They hear about the Waze acquisition by Google but want to know what makes Israel so successful while living in a tough neighborhood. They want to know what they can learn from us.”

His approach indeed struck a chord. Boasting a membership of 2,000, Israeli Startups NYC is now the largest active Israeli-American tech community in New York and began a partnership with Microsoft called One-Day Incubator.

“Every Thursday, five teams come to the Microsoft Bizspark office in Times Square for a one-day experience where they get free office space, coffee, facilities, mentors and guidance to build their startup to the right size — all for free,” says Vaknin, who created the initiative in cooperation with fellow Israeli Zack Weisfeld, head of Microsoft Ventures Global Accelerators.

“The concept is not targeted only to Israelis, but we are bringing in Israeli mentors so people from all over the world launching a startup in New York can see how strong Israel is in the startup space. This will further help us brand Israel as a startup authority. I love to put Israel in the right perspective in other people’s eyes.”

Vaknin notes that Israeli tech exits in 2013 totaled $7.6 billion, and that Israel has more NASDAQ-listed companies than any other country outside the United States.

He wants meet-up participants like Brad to understand that Israel is a whole lot more than what they see on the news. “We have our issues like any other country, but we have a lot of good stuff we can give to the world.”

About 200 people come to Israeli Startups NYC events, which recently included a startup pitch night and a panel discussion entitled “How to Build a $100 Million Business.”

Panelists included Israeli-American success stories: Gil Dudkiewicz, founder and CEO of mobile advertising platform Startapp (and formerly CEO of SweetIM, which he joined as a pre-revenue company and led to a $41 million acquisition); Assaf Henkin, founder and COO at content-activation platform Kontera, acquired for $150 million; and Zvika Netter, CEO and cofounder at Innovid, which offers interactive ad formats for online video.

TIME magazine selected Netter as a “Tech Pioneer Who Will Change Your Life” in 2009. 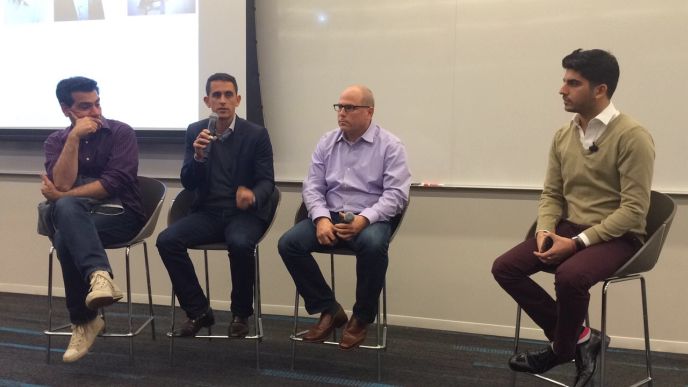 Based on the buzz created by Israeli Startups NYC, Vaknin was put on the speakers’ bureau of the Israeli Embassy to the United States and hopes to expand the voluntary venture to additional American cities next year.

Meanwhile, Brad tells ISRAEL21c that his Tel Aviv visit provided him with connections that could be relevant for the future.

“I was really impressed by the thriving ecosystem there despite the small population. I was fascinated by how disproportionately devoted to tech and startups Israel is,” he says.

“I suppose it speaks to the Israeli mentality, personality and drive. I was also impressed by how receptive everyone was. They were very welcoming, and I never felt excluded for not being Israeli.”

UNCOVER ISRAEL - Get the ISRAEL21c
Weekly Edition free by email
Sign Up Now!
Bring Israel's story to life.
Millions of people around the world rely on us to gain a deeper understanding of Israel. We are the trusted source for original content you won't find anywhere else.
You can make a difference. Donate today to support journalism that brings Israel’s story alive.
SUPPORT ISRAEL21c
Read more on:   Lior Vaknin, Israeli Startups NYC, Technology, Tel Aviv, Innovation, israeli startups