When Talia Zoref started out as a fashion illustrator, she had none of the right requirements. She didn’t have connections, inside information or the right look to make a name for herself in the fashion world.

Yet in the past few years, Zoref’s colorful, creative fashion sketches have appeared in Vogue and Elle, and she has worked with major fashion powerhouses like Fendi, Gucci and Chanel.

She said she appreciates the meteoric rise of her career because “I did it on my own.”

“It’s been long, crazy ride,” she said in a recent interview.

Zoref has a Canadian mother and an Israeli father. She grew up in Israel but spent a lot of time in Canada, adapting quickly to two different cultures. Perhaps that is why she can bridge the gap between strangers; with her warmth and sincerity, she seems to become instant friends with everyone she meets.

Zoref said that she was interested in fashion from an early age, “always drawing on the table,” even as a little girl. She attended George Brown University in Toronto, and then Shenkar College of Design in Tel Aviv.

At first, she thought that she would become a fashion designer but what she really wanted to do was combine fashion with art.

She started sketching fashions and began a fashion blog in 2013 as a hobby, never imagining that it could become her career. For a whole year, she posted her sketches but nothing happened.

On the spur of the moment, she decided to go to Tel Aviv Fashion Week in early 2014. She didn’t have a ticket but that didn’t stop her.

“I went to the guard at the door and told him I was a fashion blogger and he said, ‘Yes, you can come in,’” Zoref recalled. 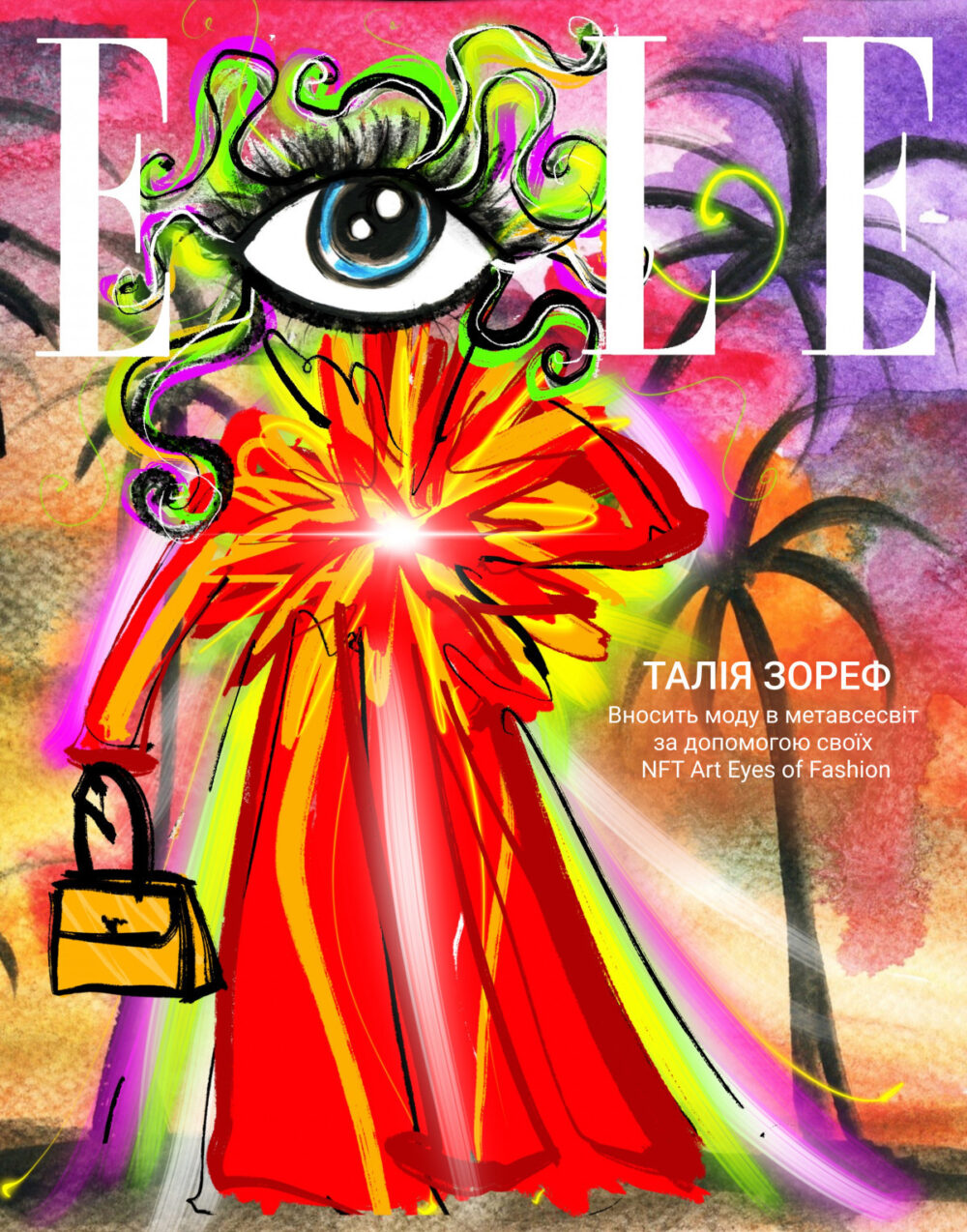 Once inside, she started meeting people and talking to them; soon she was making connections and then posting her fashion illustrations on the blogs of other people with more followers.

Taking another chance, she flew to New York City for its fashion week a few months later. That was when she “went live,” she said, posting sketches in real time, showing different moments in the fashion shows.

Instead of simply taking a photograph of a model’s outfits, her sketches added her own personal flair, vision and “vibe.”

Then, as now, she worked quickly, a bit like a court stenographer taking shorthand notes. She still uses a black marker and watercolor paints. Sometimes she has a cup of water to dip her brush into; other times, she has a portable watercolor set. Her style is vibrant as are the colors she uses: red, green, pink and blue.

While serving as a medic in the Israel Defense Forces, Zoref sketched fashion illustrations during her two-week vacation every year.

Soon she was posting her sketches of Valentino and Versace clothes, for example, on Instagram in its early days, “when it wasn’t a thing.”

thousands of followers,” she said. “Today, everything is so thought-out and these companies have social-media consultants. Only a few years ago, it was much simpler and more innocent.” 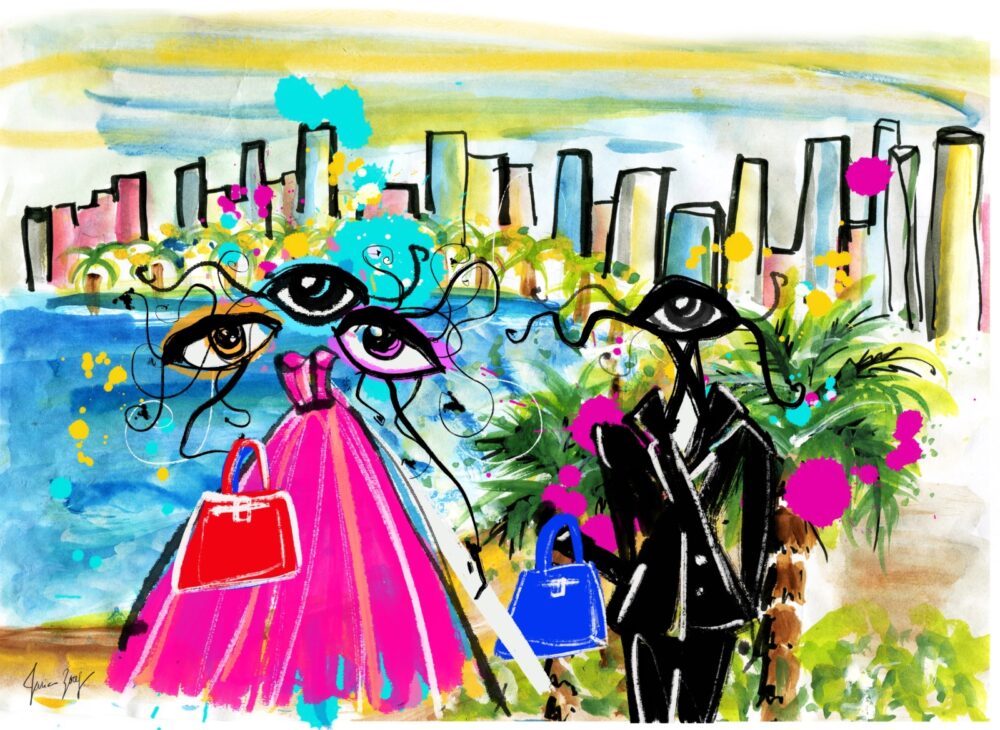 A sketch by Talia Zoref

Zoref’s style grew more recognizable and popular, and by 2015, fashion frontrunners began reaching out to her and giving her commissions.

“It’s important to emphasize that I had to reach out first,” she said. “I didn’t just sit at home. I took chances and went to places, talked face-to-face to people and made my own connections. I did a lot of reach-outs and some people never got back to me, but that didn’t stop me.”

At fashion shows, Zoref was allowed backstage where she met celebrity legends like Celine Dion and Mariah Carey. She sketched them quickly, and then gifted them her art.

“It’s very hard to approach someone famous like that,” she said. “I had to build my confidence. It took a lot of courage.” 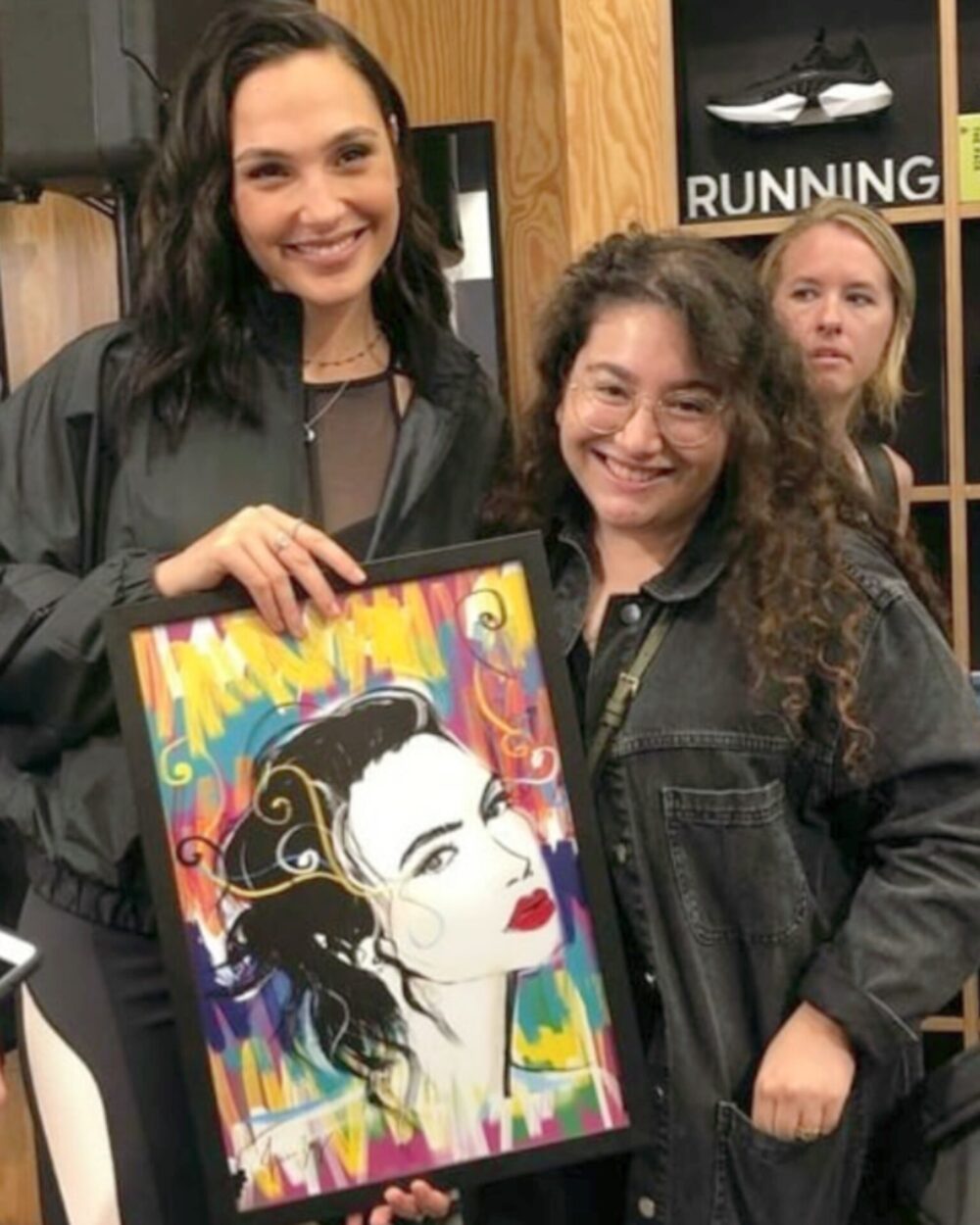 Gal Gadot holding a portrait of her by Talia Zoref, right. Photo courtesy of Talia Zoref

“I guess that is my Israeli side,” Zoref said with a laugh.

“It’s exciting to meet people who are doing exciting things and talk and listen to them,” Zoref said. “But I learned that they’re just humans like everyone else. That’s the biggest lesson.” 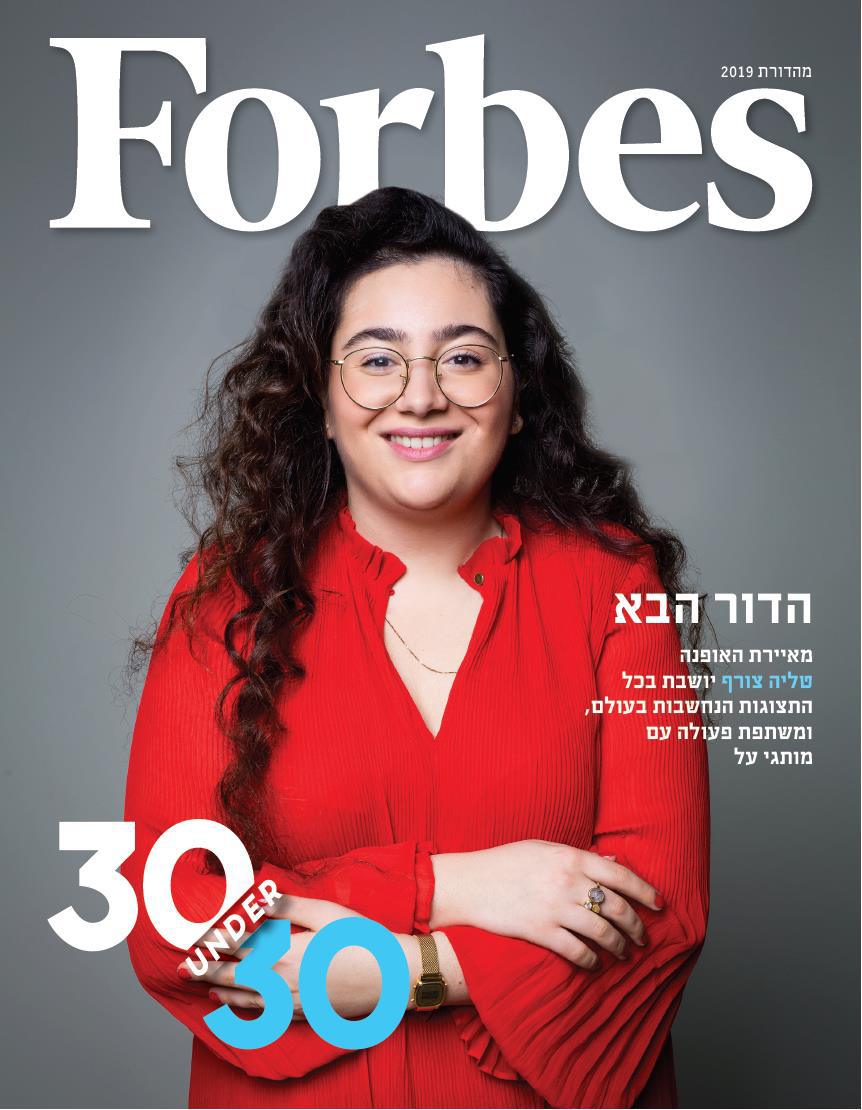 Although Forbes named her as a 30 under-30 Israeli honoree for her work in 2019, she felt it was “weird that I had to prove myself.”

“On the one hand, I wanted to be part of this colorful, creative fun world as a woman artist,” she said. “On the other hand, I felt judged for who I was.”

That was when the idea of “Eyes of Fashion” was born. Two years later, she joined forces with Assaf Sela.

It’s a subtle, smart play on words because Zoref is still using her own eyes and her unique skill to capture fashion designs. Now, however, instead of models’ faces, she sketches large, bold eyes. Sometimes one eye, sometimes five or six.

Her Eyes of Fashion is not only replicating other people’s fashions, it is becoming a brand of its own, with growing clout, making an iconic statement.

“My path to healing and feeling good about myself was creating those eyes,” Zoref said.

The mission of Eyes of Fashion is to help empower other women to enter the fashion world. The company plans to set up online courses and has launched podcasts on Twitter.

Zoref hopes to bump out the boundaries of the fashion world to make it more inclusive, not only in the traditional fashion world but also in the metaverse, where she is one of the forerunners of fashion couture.

“I applied to be in an artists’ display at the NFT/NYC event in June,” Zoref said. “It’s the biggest NFT [non-fungible tokens] event in the world.”

The event draws thousands of people from finance, technology, art, music and games who are interested in the new frontier of the metaverse.

“Out of thousands of artists, I was one of about 200 artists chosen for an exhibit called Diversity of NFTs,” Zoref said. “I believe I was the only Israeli.” Along with the other winners, her art appeared on a mammoth billboard in Times Square.

“This was something I couldn’t even dream of,” Zoref said. “Or maybe I dreamed of it, but I thought, ‘Oh, maybe in 10 years,’ and now I’m already established. It’s very exciting.”

Six months before NFT/NYC, Zoref auctioned off 8,888 pieces of her digital Eyes of Fashion artwork on OpenSea, the largest marketplace for NFTs. The entire body of work sold within two minutes.

Be true to yourself

Zoref believes that Eyes of Fashion gives authenticity not only to herself but to others.

“We shouldn’t judge ourselves on the standard image. It’s important to be ourselves. We can be so much happier and live our true selves,” she said. 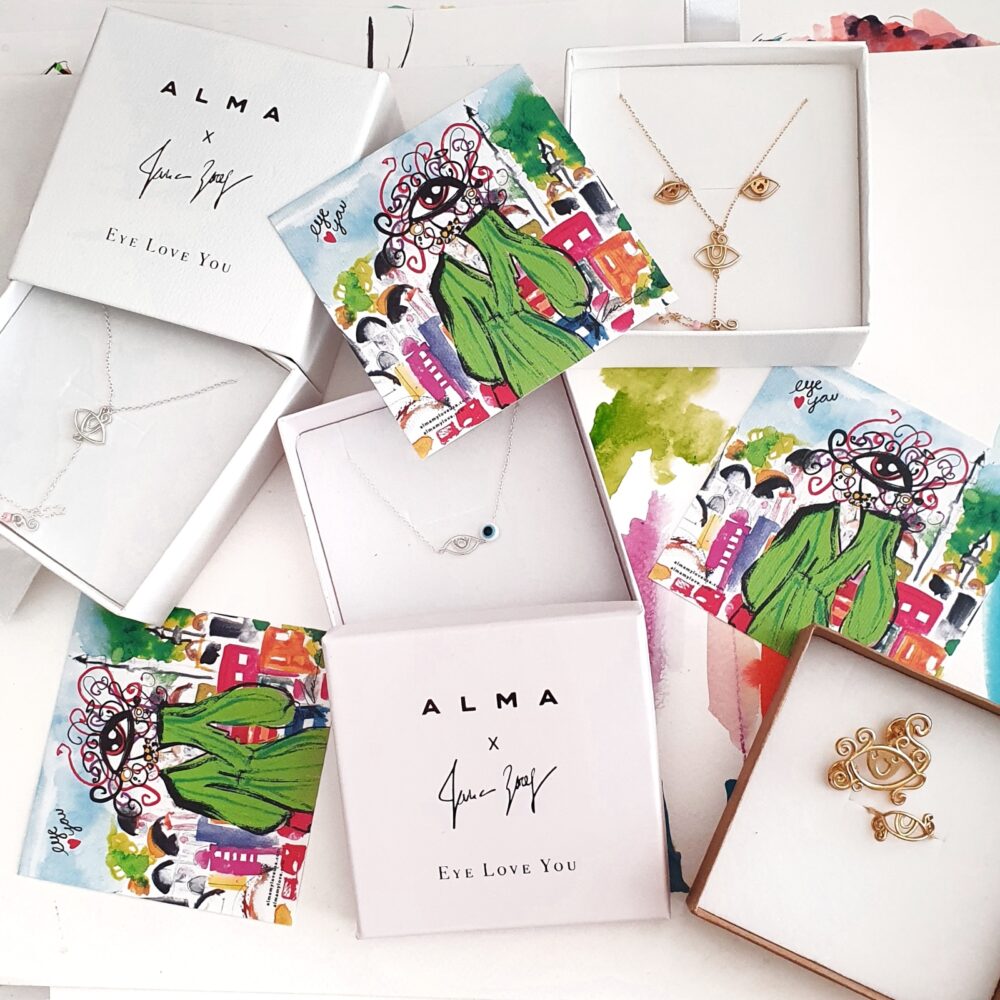 One of the highlights of her career so far has been walking down the runway at fashion shows. The first time she did it, she didn’t walk as a model. Instead, she walked as an artist.

“I never dreamed of being a model but the idea that a girl like me ended up on the runway!” Zoref said.

“I was so happy to be there. It was really funny and fun. I could walk on the runway the way I am, without changing anything about myself.”