When Israeli celebrity chef Eyal Shani set off an Instagram storm in early October with a photo of spaghetti Bolognese in a pita captioned by a political rant in Hebrew, it wasn’t clear what was more controversial– his words, or the contents of that pita.

A quick browse of the Miznon menu reveals that the man stuffs practically everything into the pocketed flatbread, from the roasted cauliflower that started a food revolution, to ratatouille, to slow-cooked beef stew. 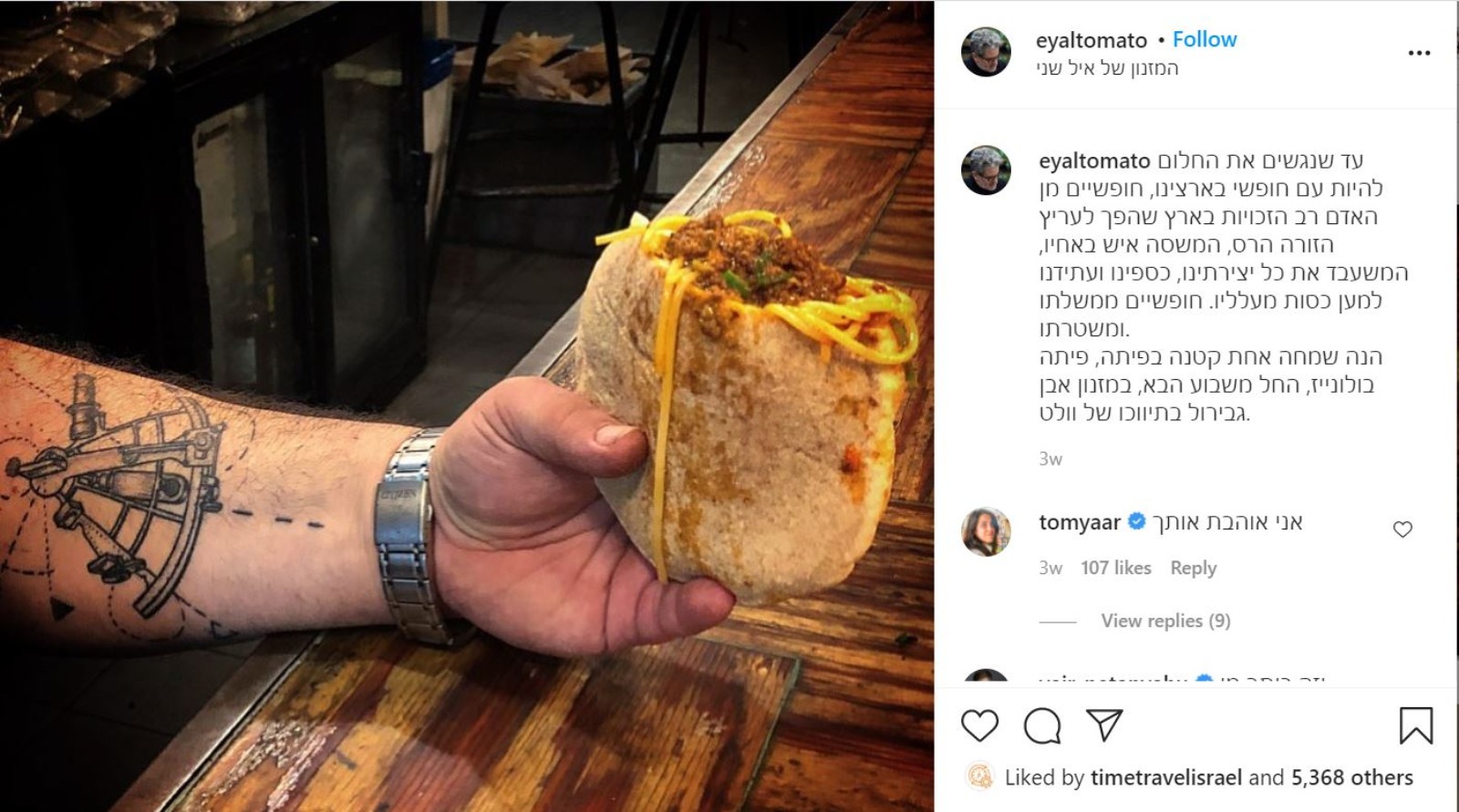 Pushing on a pandemic that’s been disastrous for the restaurant business, the now global Miznon — originally a Tel Avivan restaurant — bravely opened a new Brooklyn location on October 1. The signature dish is a pita stuffed with “candy steak” — a 24-hour braised brisket with crispy edges.

But Shany’s culinary empire isn’t the only one stuffing pitas with unlikely fillings lately. Before the pandemic restrictions, Dwiny Pita Bar, a tiny restaurant in the winding alleyways behind Jerusalem’s Machane Yehuda Market, which opened up shop in 2014, served as many customers as could fit around their equally tiny bar, plus the few small tables pressed up near the front door, and the odd customer or two dining on the stoop outside. 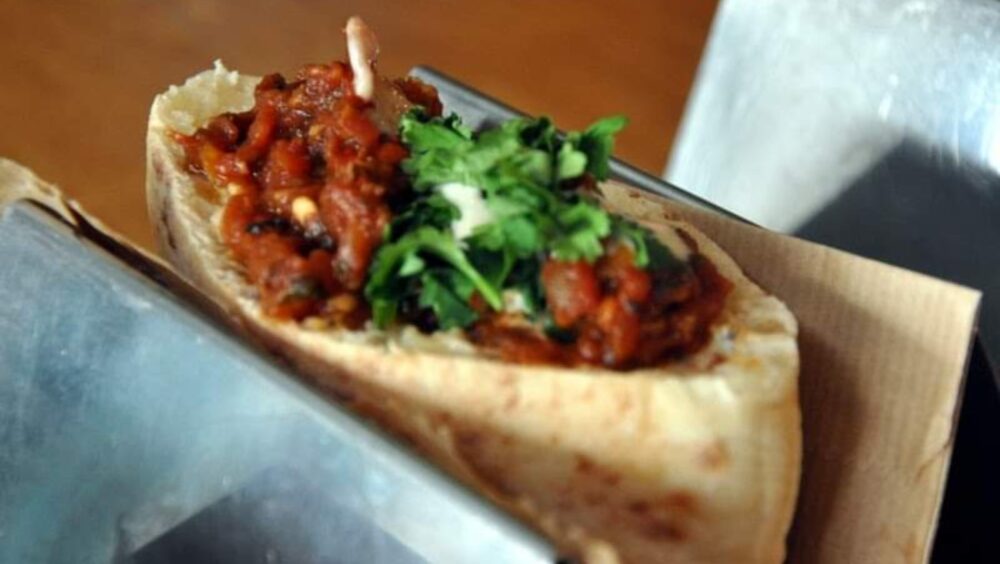 I was first taken there by Jerusalem-based food writer Debbie Kandel a few years ago. Dini Kasorla, the blonde-haired, red-lipped proprietor, served us sinya — a dish of lamb meatballs simmered in tahini sauce that’s usually reserved for a plated meal — in one of their fresh-baked pitas.

Establishments like these have changed the way Israelis view pita bread in the last few years.

Traditionally, pitas are used to wipe up a plate of creamy hummus (or alternatively, are stuffed with hummus, and/or fries, and taken to go).

Or they are sliced open along the top with a box cutter (yes, you read correctly) to hold freshly fried balls of falafel, or slices of lamb or chicken thigh shawarma, hot off the spit, along with various salads and pickles, a dollop of tahini sauce, and perhaps sometimes a drizzle of amba (spiced pickled mango sauce), and a sprinkling of fresh chopped parsley. 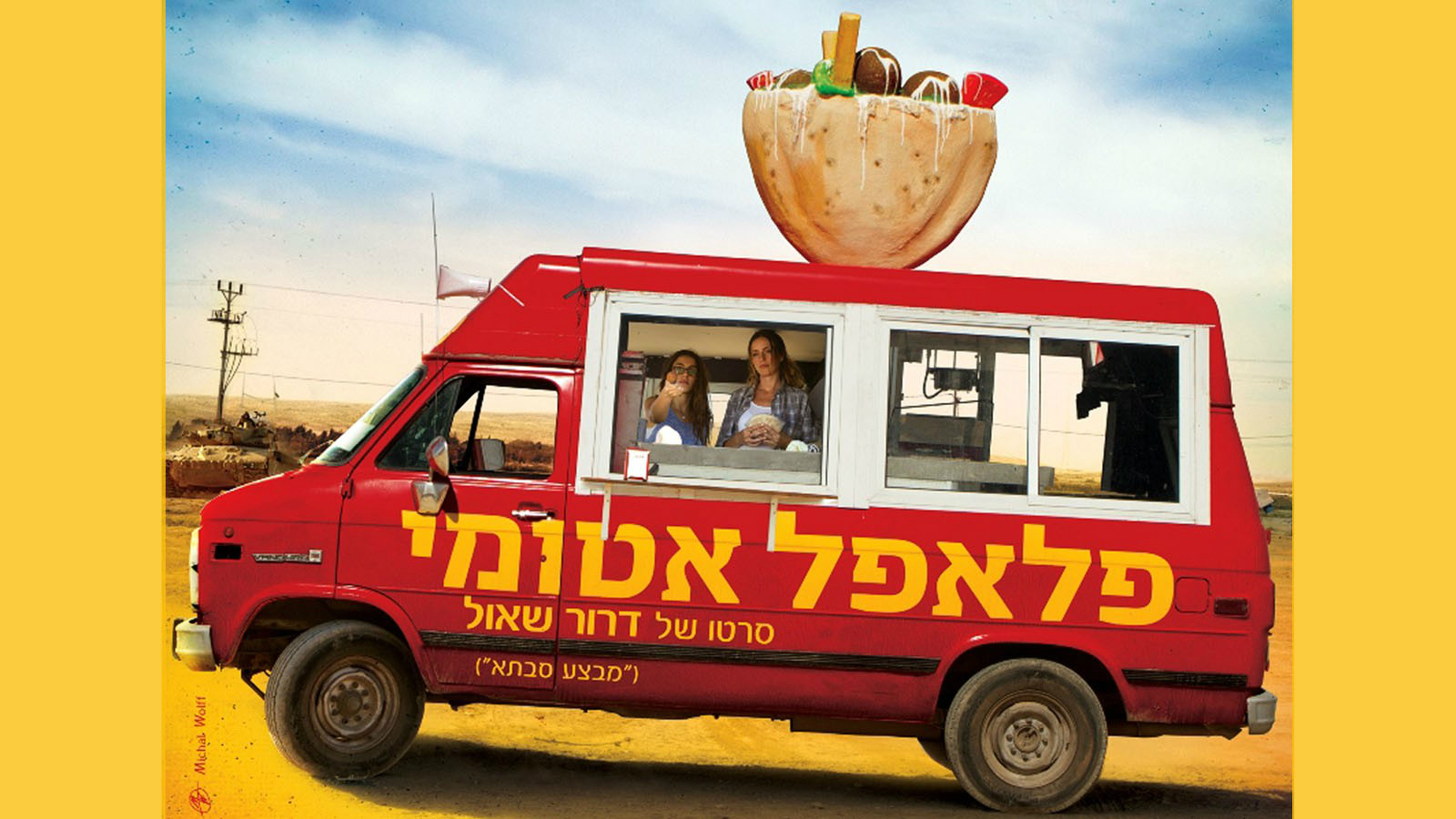 And one can simply not forget the sublime street food that is thin, crispy chicken schnitzel, nestled into a pita alongside all the previously mentioned fixings, like the ones sold at Etzel Tzion, an old-school Tel Aviv stall that’s been around for three decades next to a small post office by the US Embassy.

Then there is the unassuming story of the arayes. Once a dish that was hard to come by, you’d now be hard pressed to see an Independence Day social media post or find a trendy casual-chic dining spot that isn’t serving them or showing them off. 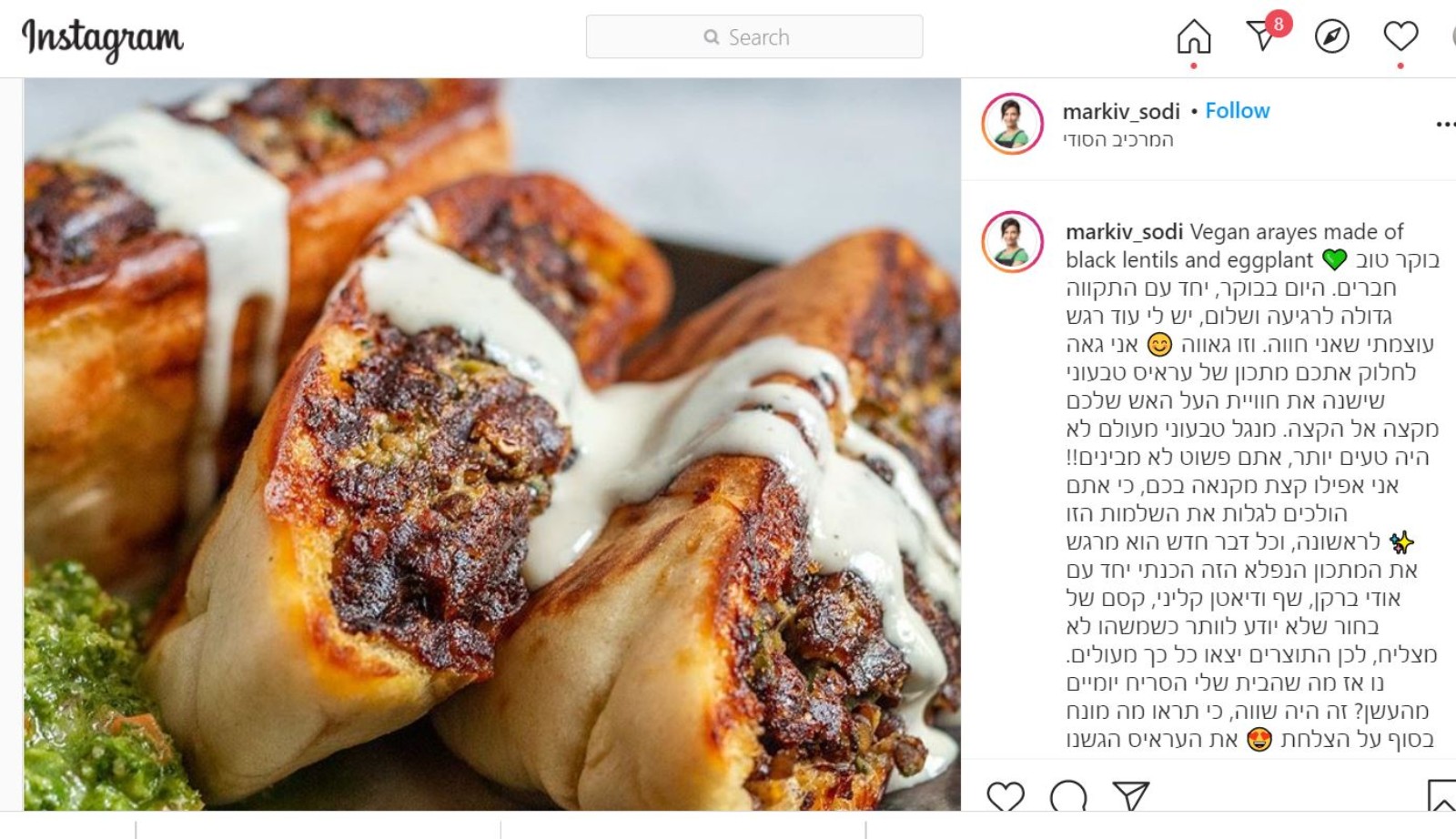 Usually consisting of a pita stuffed with spiced ground lamb, then grilled or griddled, it is like an empanada of sorts, but is also reminiscent of its distant cousin, the manakish — a lahmajun-like docked flatbread topped with ground lamb, or a slurry of olive oil and zaatar, or red pepper paste. In true Israeli fashion, you can even find recipes for vegan variations of arayes online (Kasorla has a vegan mushroom-based one on her menu).

Getting real for a moment, these days I mostly see pitas when I’m cutting them in half with scissors (again, you’ve read correctly) to spoon in some chocolate spread for a morning snack. Chocolate sandwiches, after all, are to Israeli children what peanut butter and jelly is to American ones.

Pita can be considered the original flatbread going back thousands of years, especially when you consider that other types of flatbreads — like the pocket-less stretchy laffa, and thicker naan-style bread — can also technically be called pita.

Made from a simple white dough, they are quite easy to make. Balls of risen dough are rolled out into thin circles, then baked at the highest temperature possible, so they get the sudden burst of heat necessary for them to puff up dramatically, leaving a hollow center. 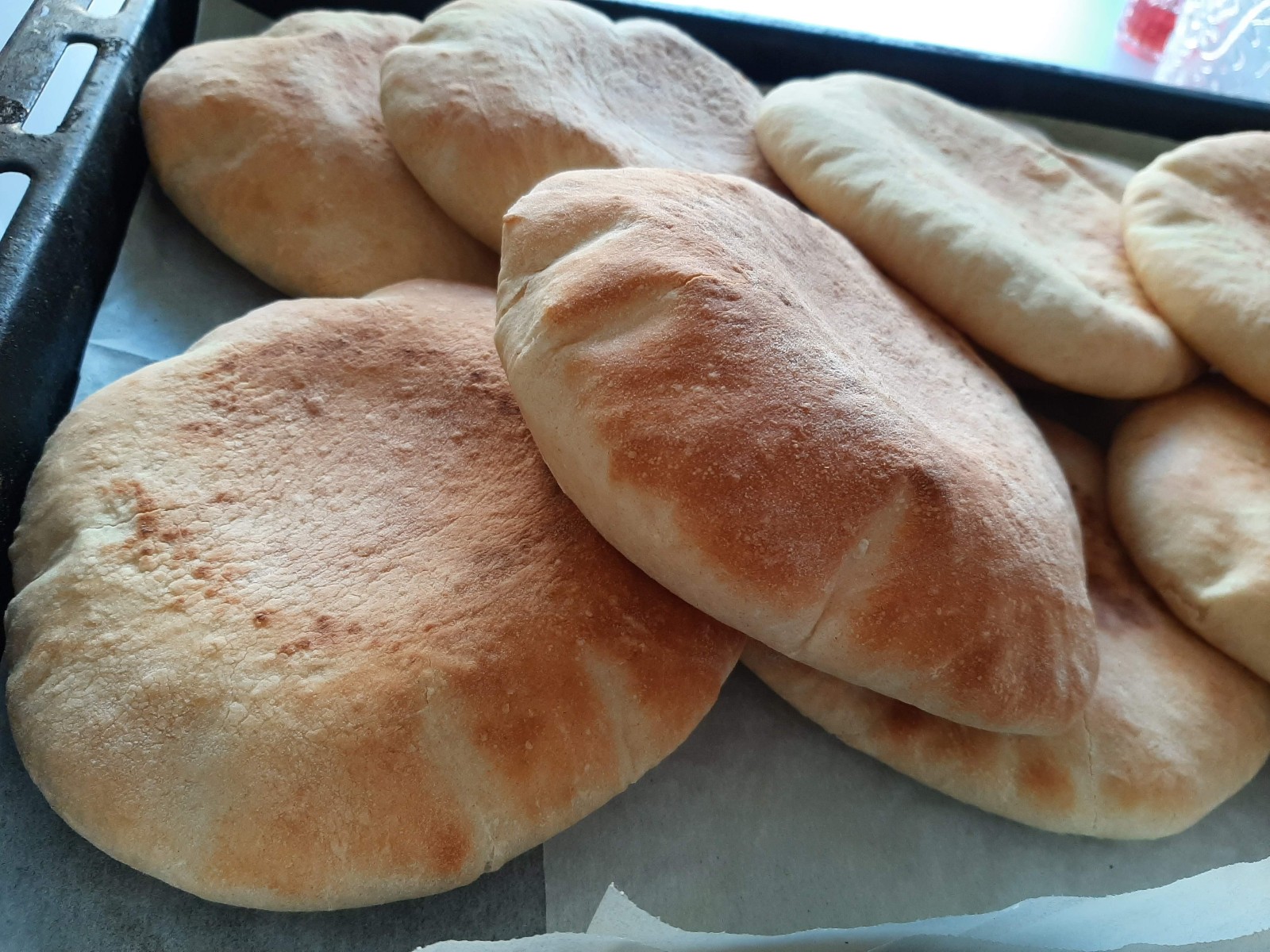 The difference between the thin Lebanese-style pitas you see in stores internationally, and the fluffier Israeli ones, is as simple as additional rising time.

Whether the pitas in Israeli cuisine are bought from your everyday supermarket, or sourdough versions bought from a specialty artisan bakery, they have certainly changed from ancient daily bread to the sacred holder of our quintessential street food, to the trendy casual chic dining markers of an ever-evolving modernized Israeli cuisine.

This is a cuisine that sees pita pockets stuffed with roasted vegetables and slow-cooked heritage dishes alike. Pushing away taboos in favor of that chef-driven creative edge.

Just don’t ask us to use them to “wipe up” pumpkin-flavored dessert hummus. Another taboo, for another day.