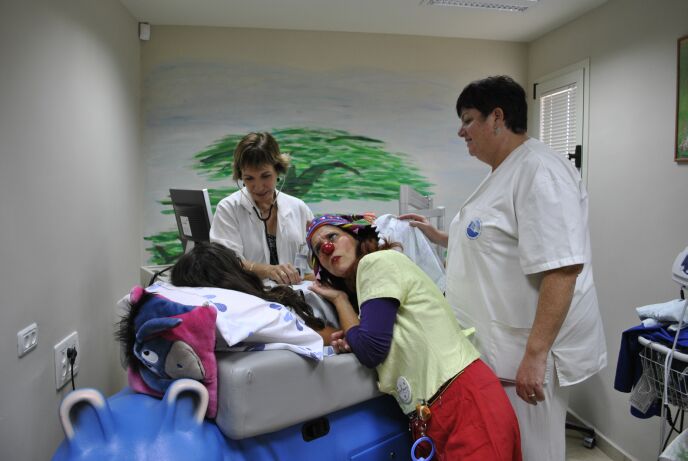 Medical clown Shoshi Ofir working with the medical staff and a young patient at the Tene Center.

Medical clown Shoshi Ofir working with the medical staff and a young patient at the Tene Center.

In full clown garb, Shoshi Ofir leads the way from the main street of the Baruch Padeh (Poriya) Medical Center compound to a small building purposely situated in a slightly secluded location.

“This is the Tene Center,” she announces proudly, pointing to the unassuming edifice with her shiny green purse, shaped like a watering can.

The red rubber ball covering her nose, and the pink plastic boots grabbing the bottoms of her colorful coveralls, glisten in the strong Tiberias sun.

Ofir, 50, whose family immigrated to Israel from South Africa when she was seven, is speaking Hebrew with a convincing Argentinean accent, exhibiting a fraction of the many roles she assumes as a full-time medical clown. She slips just as comfortably into a French accent, eliciting smiles from Tene’s staff — which includes a gynecologist, a colorectal surgeon, a pediatrician, a social worker, nurses, two other medical clowns and a secretary.

The Tene Center for the Treatment of Sexual Assault Victims, established in 2001, is the first treatment center in the world that uses medical clowns as part of the protocol for sexual-abuse victims.

Ofir acknowledges that what goes on within the cheerfully decorated treatment center is no laughing matter. The majority of the patients are children and teenagers, and they arrive in a state beyond trauma. Helping them heal, according to Ofir, is far more challenging even than cheering patients with fatal illnesses.

“Unlike the kids with physical ailments, no matter how life-threatening, victims of sexual abuse have had the ‘battery’ of their spirit killed,” Ofir tells ISRAEL21c. “They come here with deadened expressions, unable to make eye contact.”

These broken, fearful and suspicious individuals (85 percent female and 15 percent male, most between 11 and 18, according to 2013 data) arrive at Tene after referral by social services or the police. They are interviewed by a social worker and psychologist and examined by a gynecologist, which causes them great distress even though the examining table is embedded in a huge rubber hippopotamus with friendly eyes and a reassuring smile.

Ofir’s job is to make the victims feel at ease throughout the process by forging an alliance with them, choosing a humorous approach appropriate for each case. Medical clowns never adopt the harsh features and sometimes scary demeanor of circus clowns. 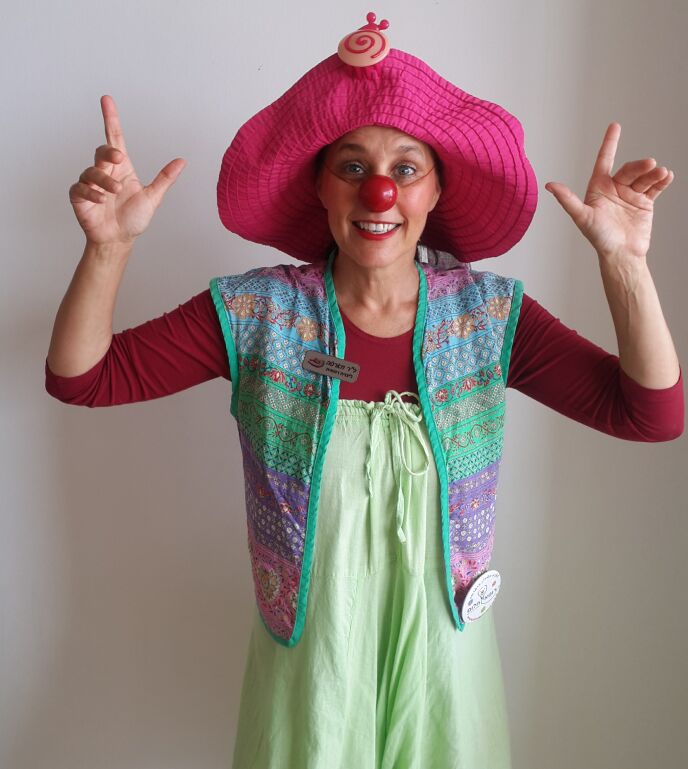 Shoshi Ofir’s work is serious, despite the getup.

With children and youth, Ofir often creates a “conspiracy” with them against the staff members needing to treat them. This is particularly important for young victims of sexual abuse, who no longer trust adults.

One girl refused to talk about her abuse or go into the examining room. Ofir, who has been working at Tene for the past seven years, took her aside and said, “Let’s sneak out of here without telling anybody and go find something to eat.”

The two of them walked around the hospital grounds, chatting about clothes and other things, until the girl felt comfortable enough to return to Tene. Ofir stayed with the young teenager, continuing in her clown mode during the gynecological exam.

Dr. Nessia Lang, who heads the center and conducts the gynecological exams, tells ISRAEL21c that Ofir’s role is crucial.

“Kids who have been sexually abused are especially sensitive to invasive procedures on the one hand, and particularly suspicious of adults on the other,” she says. “The clown causes them to relax – necessary for such exams — which enables me to do my job.”

She is not irritated by the clown and the patient chattering, singing and blowing bubbles at her during the exam, because it makes her task easier.

“It is extremely difficult to examine a patient who clamps his or her legs together, for example,” she explains. “When a clown is not assisting me, I utilize many of the strategies that I have learned from Shoshi.”

Lang likens medical clowning in this context to anesthesia without the drugs.

“Shoshi transports them to a different plane, where pain is minimized,” she says. “And we can thus grant them some of the control over what is happening to their bodies that they were stripped of by their abusers.”

This innovative approach at Tene amazed a group from the United States that visited recently as part of the Jewish Agency’s “Partnership Together Sovev Kinneret” program that pairs Israeli communities in the north with cities in Wisconsin, Minnesota and Oklahoma.

The visitors now wish to introduce something similar in their cities. Ofir and other members of the staff will travel to Milwaukee in November to talk about the Tene Center’s work.

Medical clowning, made famous in the United States through the work of Dr. “Patch” Adams, was introduced in Israel 13 years ago. And Israelis have taken it to an unprecedented professional level.

“In America, medical clowns are volunteers who go from hospital bed to hospital bed, using humor and cheer to assist in the healing process of patients,” says Ofir. “Israel is the first country in the world to use clowns in the actual treatment process, along with the doctors.”

According to Ofir, this has proven beneficial to all concerned. For the patients, it is relaxing and helps make an unpleasant or painful procedure tolerable. It enables physicians to perform invasive tasks with happier, more cooperative patients and calmer family members.

The married mother of three daughters lives in Kfar Haruv in the southern Golan Heights. She says her ability to do her unusual job comes both naturally (“I was born a clown,” she says) and from many years of experience and training.

Ofir stresses that when dealing with sexual-abuse victims, medical clowns need to have life experience.

“The stories are so horrifying, and the victims so damaged, that not every person in this field is cut out for it,” Ofir says. “If I didn’t have a stable family life on the one hand, and my red nose to get me into character on the other, I don’t know how I would cope with the heartbreak.”

Ofir is one of more than 100 members of Dream Doctors, a project for integrating medical clowning into Israeli hospitals and professionalizing the field. She completed a BA at the University of Haifa in a program that combines nursing care with theater, in addition to an MA in creative art therapy.

ISRAEL21c previously wrote about her pioneering work in labor and delivery wards and featured her in our TLV1 radio show.