The once virtually extinct Saharan scimitar-horned oryx has gotten a new lease on life thanks to an Israeli breeding program. 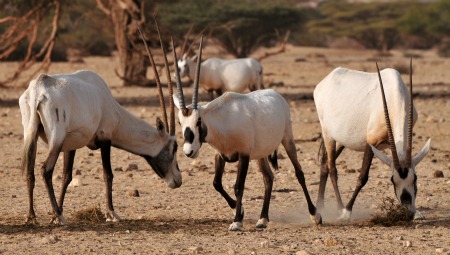 Photo by Shay Levy/Flash90
A breeding program for the once-extinct African antelope species is underway successfully at Yotvata.

It’s an old biblical tenet enacted by the Jewish forefather Noah: Go forth and multiply. In modern Israel, sadly, much of the country’s impressive wildlife that once roamed the region, including the majestic leopards, bears and the mythological “unicorn” — a type of antelope — are now virtually extinct.

But not entirely, thanks to Israeli breeding programs.

Around 1993, the late Gen. Avraham Yoffe, the first director of Israel’s Nature and Parks Authority, mounted an effort at the Hai Bar Yotvata Nature Reserve to save an African antelope species classified extinct in the wild. A breeding program for a local species of antelope, believed to be the biblical “unicorn,” was already underway there.

At this reserve 30 miles north of Eilat, the scimitar-horned oryx — its Latin name is Oryx dammah — got a new lease on life with the help of Yoffe and American-Israeli Bill Clark, an animal conservationist and licensed pilot. The hot, dry weather there proved perfect for breeding African wildlife, even though the Saharan oryx is believed never to have traveled naturally beyond the Nile’s northern limits.

In 2003, eight Saharan antelope from Hai Bar Yotvata were reintroduced to the wild at Guembeul Fauna Reserve in northwestern Senegal, a nature reserve devoted to animal diversity. At the time, Demba Mamadou Ba, the head of Senegal’s National Parks Department told ISRAEL21c, “The return of this species [scimitar-horned oryx] is very important to Senegal. We see this as a major success in helping to preserve the country’s fragile biodiversity.”

Dr. Ronny King, the veterinarian responsible for the health and welfare of wild and captive animals in Israel, tells ISRAEL21c today that four more oryx were brought from Israel a couple of years ago, in addition to two from France. The success of this animal population in Senegal stems “directly from the reintroduction,” he says. “They are doing well, and it was our nucleus [of animals] that contributed to this.”

He adds that hunting is just one of the reasons for population decline among wild animals. “It’s practically the same thing everywhere,” King says. “If it’s not the people, then it’s the animals that people bring with them. There is a lack of food for the wildlife due to over-grazing.”

Almost a decade later, the antelope have gone forth and multiplied so well that 10 of them were recently transferred to a nature reserve in Mauritania, where authorities report the herd to be acclimating well to their new home.

Israel’s Ambassador to Senegal Gideon Behar joked that although Israel doesn’t have diplomacy with Mauritania, a Sunni Islamic republic, Israelis still roam there in the form of the antelope.

Behar was accompanied by a film crew from the BBC late last year as he witnessed the introduction of a herd of 60 Saharan oryx, all descended from the Israeli-born group remaining and thriving at Guembeul, into the new Ferlo Fauna Reserve in northern Senegal.

And that is how the scimitar-horned oryx, so named because their impressive antlers resemble Arabian scimitar swords, gained hope of a future thanks to Israeli-backed efforts started by a former military general.

Meanwhile, breeding programs for native Israeli wild animals, especially the kinds mentioned in the Bible, continue at Hai Bar, which was started in1968.

Some species that have been successfully bred include the Persian fallow deer, the Asian wild ass and the white oryx, King reports.

“Whatever you want in Israel we have here,” says Shai Kabassa, manager of the Hai Bar reserve. “We have leopards, too, but we don’t want to release them — they are only for people to see. There are also foxes, and wolves we’ve released, and the sand cat,” a small wild feline.

Kabassa tells ISRAEL21c that “people call us when they find wounded animals. We treat them at the [Ramat Gan] Safari, where we have a hospital for wild animals.

He says Hai Bar Yotvata (another Hai Bar reserve is in the Carmel region in the north) is Israel’s largest. Visitors on their way to Eilat can stop there and see the big, but caged, predators, or cruise in their cars along a 45-minute mini-safari route to see animals such as addaxes, ostriches, hyraxes and even the Saharan and the biblical oryxes, “walking right next to you.”