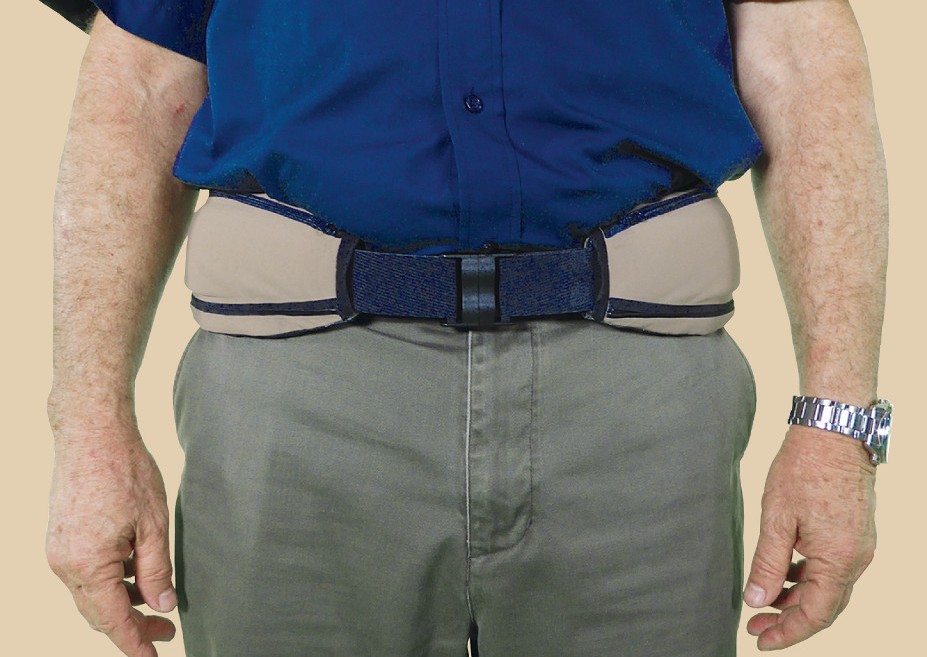 Hip-Hope fits around the waist like a belt or fanny pack. Photo: courtesy

When his elderly mother fell and broke a hip for the second time, former Israeli Air Force pilot and industrial and management engineer Amatsia Raanan searched for a product to prevent this most common serious injury in older people.

“Through her suffering I learned about the epidemic of hip fractures,” Raanan tells ISRAEL21c.

Each year, nearly 3 million seniors worldwide are hospitalized due to hip fractures. Many of them experience a drastic deterioration in quality of life. And the direct annual cost of treating hip fractures exceeds $15 billion in the US healthcare system alone.

Rather than focus on better ways to treat the broken bone, Raanan decided to leverage cutting-edge technology to protect the pelvis upon impact and avoid injury in the first place. He and three cofounders developed Hip-Hope, a smart wearable device designed as a belt.

Once Hip-Hope’s multi-sensor detection system senses an impending collision with a ground surface, two large airbags are deployed instantly from each side of the belt to cushion the hips, and a connected smartphone app sends an automatic alert message to predetermined recipients.

The 1-kilo (2.2-pound) device even has a built-in emergency call button that the user can activate in any situation of distress.

Hip-Hope will be available for lease or purchase. Photo: courtesy

The patent-pending Hip-Hope has earned medical-device certification from the CE (Europe), FDA (United States), Health-Canada and AMAR (Israel). In studies carried out at a major Canadian lab, the Israeli device was proven to reduce impact by 90 percent.

Now, 150 Hip-Hope units for beta testing are being manufactured at Medimor in Tiberias. Distributors in Europe already have placed orders for Hip-Hope, intended to be the first active hip protector device in the market. Designed by Jonathan Bar-Or Industrial Design in Pardes Hanna, the device will be available in a range of colors and styles after entering mass production by the end of 2017, says Raanan.

The target users — seniors at high risk for falls and fractures, both at home and in a wide variety of care facilities — will be able to purchase Hip-Hope or lease it on a monthly basis.

“Over the years, I’ve been exposed to several ideas for developing active hip protectors that will prevent hip fractures in the event of a fall. I find the technology of Hip-Hope to be especially innovative and promising in this regard,” said Prof. Stephen Robinovitch of Simon Frazer University in Canada, a renowned researcher on the prevention of falls and fall-related injuries in older adults. He joined the company’s scientific advisory board to help develop the technology.

Established in May 2011 in Hod Hasharon, Hip-Hope Technologies was cofounded by Raanan with two friends, Amos Shattner and Yoram Romem. They later recruited Ran Manor as vice president for R&D.

Raanan isn’t a typical 30-something Israeli startup entrepreneur. “I served for many years as a pilot in the Israeli Air Force, in the development of airborne and information systems,” he tells ISRAEL21c.

Raanan earned a degree at the Technion-Israel Institute of Technology and worked first as a business consultant, then for Amdocs.

A father of two and grandfather of five, Raanan also is a photographer. One of his exhibitions, sponsored by Israel’s Ministry Of Foreign Affairs, has been shown in Israel, the United States and Canada.

Though his mother was still alive when development of Hip-Hope began in March 2012, her second hip fracture had led to slow, steady decline and she passed away before seeing Hip Hope win the Innovation Award at the March 2015 MEDinISRAEL international conference and exhibition. 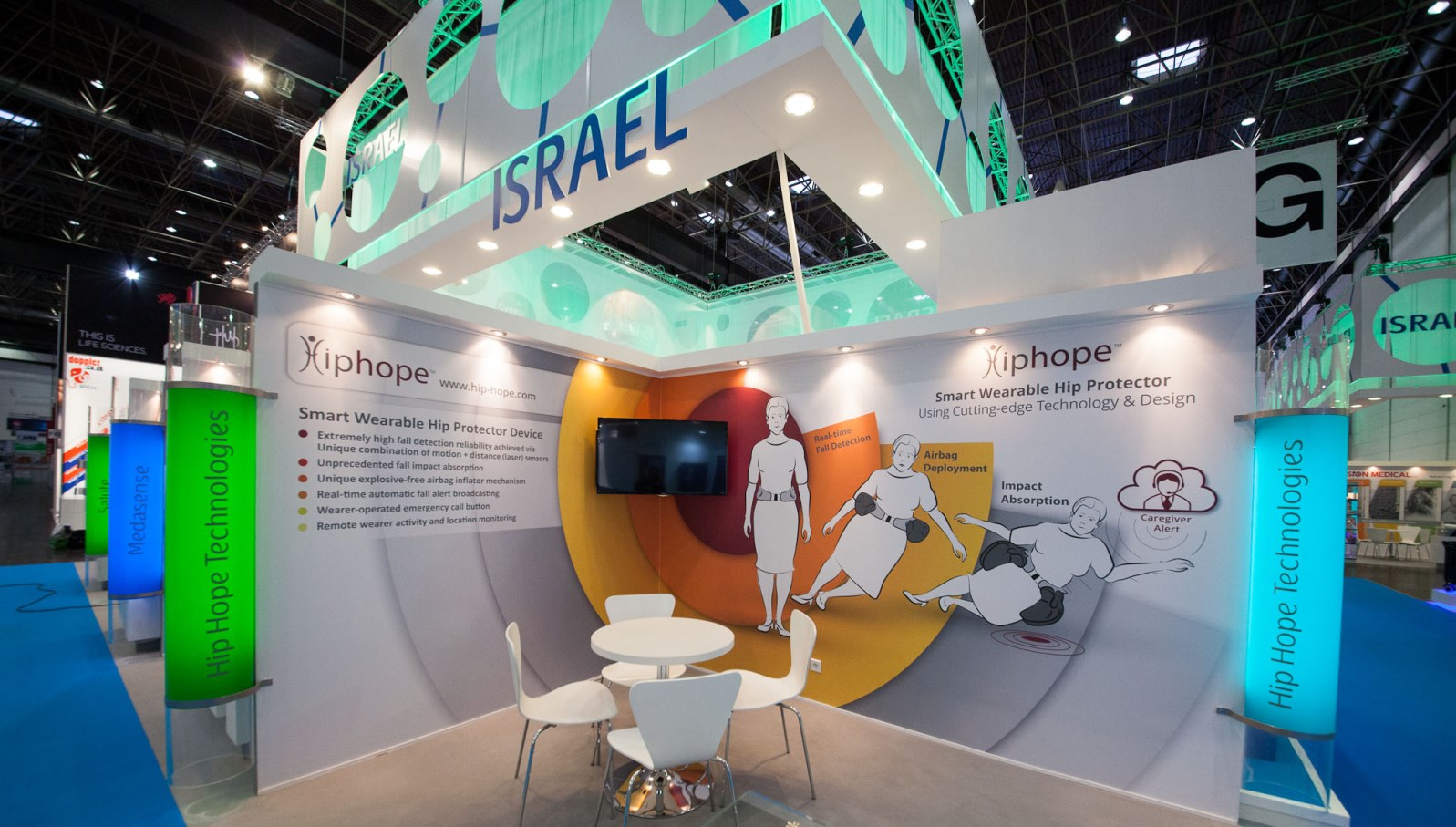 The Hip-Hope booth at the 2016 Medica Trade Fair in Germany. Photo: courtesy

Since then, the product has been refined in a continuing R&D process.

In future iterations, the wearable also will enable remote activity monitoring, keeping track of the user’s movement data to recognize and alert to changes in personal motion patterns and fall risk level. These features are meant to enhance its preventive capabilities.

UNCOVER ISRAEL - Get the ISRAEL21c
Weekly Edition free by email
Sign Up Now!
Bring Israel's story to life.
Millions of people around the world rely on us to gain a deeper understanding of Israel. We are the trusted source for original content you won't find anywhere else.
You can make a difference. Donate today to support journalism that brings Israel’s story alive.
SUPPORT ISRAEL21c
Read more on:   Health, Technology, Hip-Hope