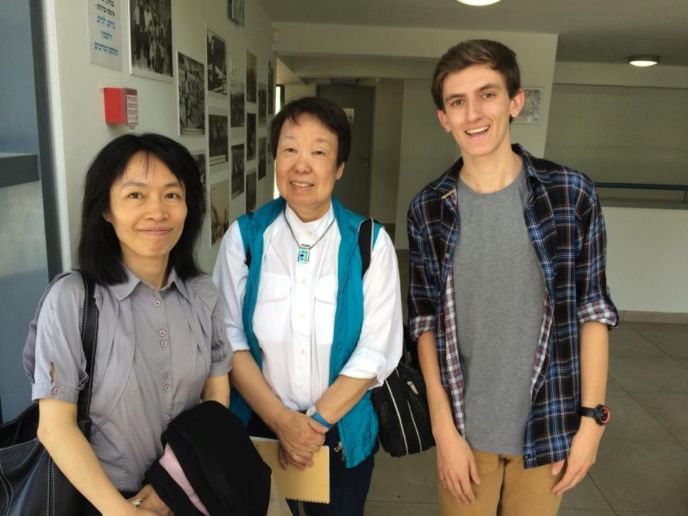 There’s something unusual about one of the startups renting co-working space in the newly opened WeWork building in Herzliya: Its CEO is still in high school.

Iddo Jonathan Gino, 17, is a senior at the Hebrew Reali School in Haifa and hopes to finish an undergraduate degree in computer science at the Open University next year.

When he’s not studying in school and online, Iddo heads RapidPay, a year-old company whose four employees have created a mobile in-store and online payment platform for customers – mainly fellow teenagers –without a credit card or bank account.

“I try to manage my time as well as possible,” Iddo tells ISRAEL21c understatedly.

Having lived with his family in New Zealand for a couple of years before high school, Iddo speaks English fluently and has a working knowledge of Italian – as well as programming languages such as JavaScript, PHP and Python.

“When I was about 11, I went with my dad to his workplace, and I sat with one of the programmers and saw all the cool stuff he was doing,” Iddo relates. “He showed me a program he made to sort out seating for his son’s bar mitzvah automatically. Then he gave me a book to learn how to program. And from there, one thing led to another.”

Iddo began with “some cool little projects,” learning how to build online management systems, interactive websites and iOS apps. Last summer, he had an internship at a tech startup in Israel. “I got to experience how a startup works, and then I opened my own,” he explains.

Last year, Iddo teamed with students from the American Hebrew Academy in Greensboro, North Carolina, to develop a predictive app, SmartAlarm, which uses traffic data, flight changes and other real-time information to determine the appropriate time for the user’s alarm to ring in order to get to a destination at the right time. They hope to get funding to launch the app.

“Today, many people are referring to the so-called ‘Age of Context,’ where everything will be connected and every product or service will be enhanced using data and technology from elsewhere,” says Iddo. “SmartAlarm is a great concept that utilizes contextual technology and real-time data sources to give users a true benefit.”

This project was part of a long-distance collaboration between the two high schools. Reali, one of Israel’s oldest private schools, boasts many distinguished alumni. “Reali is a really great school that has allowed me to do college courses and have my own startup, and we have opportunities in school to create stuff, too,” says Iddo, a computer science and physics major.

Last May, he and fellow teen entrepreneur Gil Maman – CEO of HealthBelly and an award-winning veteran of several hackathons — helped organize the Israeli branch of World Hackathon Day, held at the Google Campus in Tel Aviv. This global initiative was the brainchild of Innovation Israel cofounder and wearable technology evangelist Nir Kouris, 32. 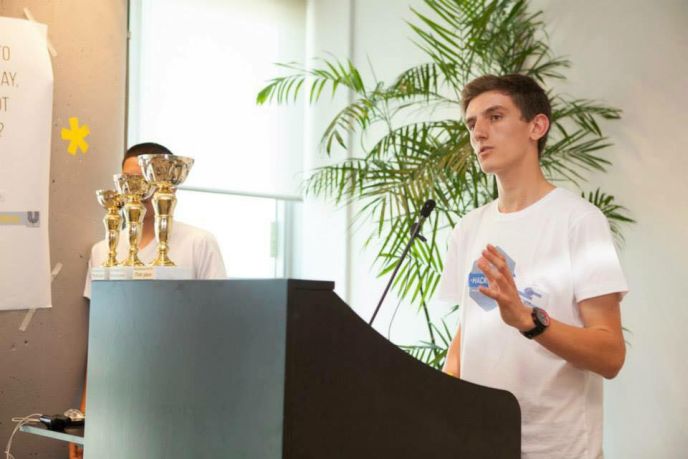 Iddo Gino at the 2014 World Hackathon Day in Tel Aviv.

With the help of an ROI micro-grant and corporate sponsorships, Kouris and two Netherlands-based cofounders connected Israeli teen techies with peers abroad as they hacked apps for health, finance, music, charity and travel. Hundreds participated in the weekend event last May, leading to some potential partnerships and products.

Behind the scenes, the hackathon also afforded organizational experience to enterprising teens like Iddo and Gil, and their counterparts in Holland, India, Spain, Morocco and Germany.

Iddo says that he’s motivated by “all the awesome futuristic stuff out there, like GetTaxi and Waze,” both founded by young Israeli entrepreneurs, though perhaps not quite as young as he is.

“One of my role models is Mark Zuckerberg, the founder of Facebook. He went to university but didn’t stay there long. He had one good idea to pursue and went with it.”

Iddo also admires Israeli tech legend Dov Moran, one of the early pioneers of portable data storage. “I like the way he created something nobody believed he could, and now we can’t live without flash memory.”

The Haifa whiz kid muses: “One of the things about the Israeli personality and culture is that it enables you to grow quickly and is very open-minded. I could talk to investors when I was 15, and they took me seriously. I don’t know if that’s something that could happen abroad.”