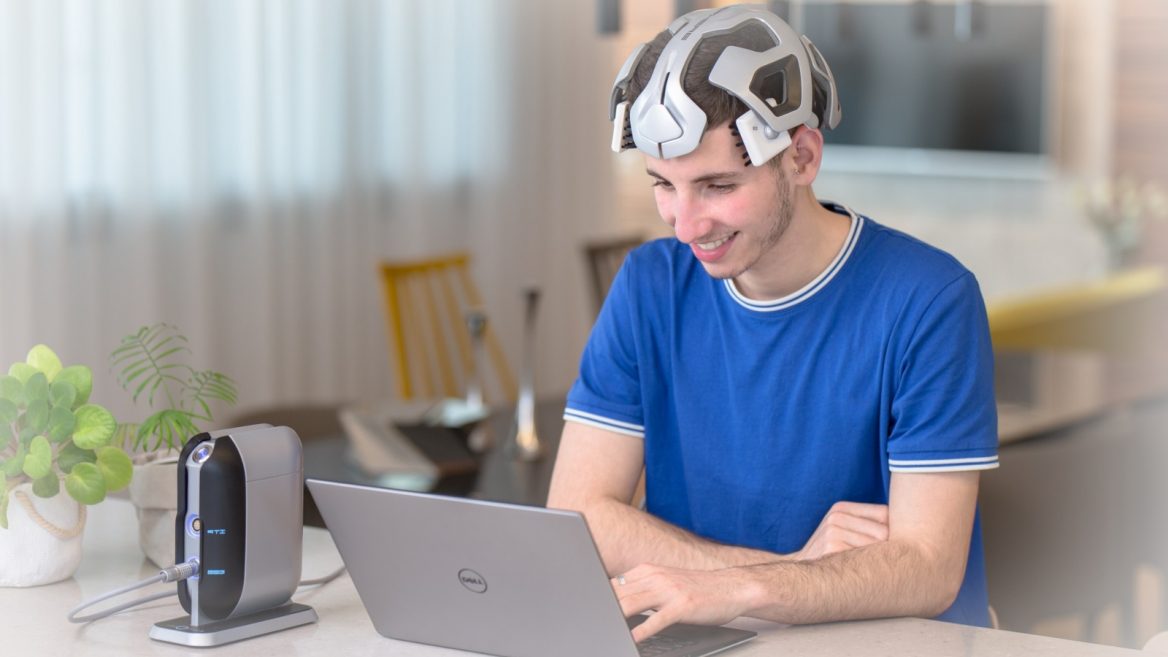 Patients with ADHD will wear InnoSphere’s electrode-embedded cap for 20 minutes over the course of 15 days. Photo by Ehab Shukha

An Israeli startup has developed a new medical device to treat attention deficit hyperactivity disorder (ADHD). And it doesn’t require any drugs like Ritalin or Adderall.

Haifa-based InnoSphere’s patented medical “cap” sits on top of the patient’s head. Small electrodes embedded in the cap deliver electrical charges to regions of the brain that are involved in ADHD behavior. The cap is worn for 20 minutes a day, for 15 days only.

InnoSphere’s goal is to stimulate the neurons in the brain to make new connections in areas where those suffering from ADHD are deficient.

“We give the neurons a nudge to talk to other neurons in the brain, to communicate better,” founder and CEO Rami Shacour tells ISRAEL21c.

InnoSphere’s ADHD device takes advantage of “neuroplasticity” – the brain’s ability to reorganize itself by forming new neural connections in response to novel activities and situations or to compensate for injury or disease.

That makes it different than other Israeli-made neuromodulation devices ISRAEL21c has covered, such as Neurolief or Theranica, both of which aim to eliminate the pain of migraine headaches by electrically stimulating specific nerves.

InnoSphere’s product will be prescribed by a doctor after making an ADHD diagnosis and identifying the severity of the symptoms. The doctor will upload that information to InnoSphere’s online platform where, says Shacour, “our AI algorithms will generate a personal treatment protocol.”

This is key to treating ADHD.

“The technique of brain stimulation has been known for many years now and has been shown to improve cognitive abilities,” Shacour explains. “The problem is that doctors cannot tailor the stimulation to specific brain regions for each and every patient. With our AI algorithms, now they can.” 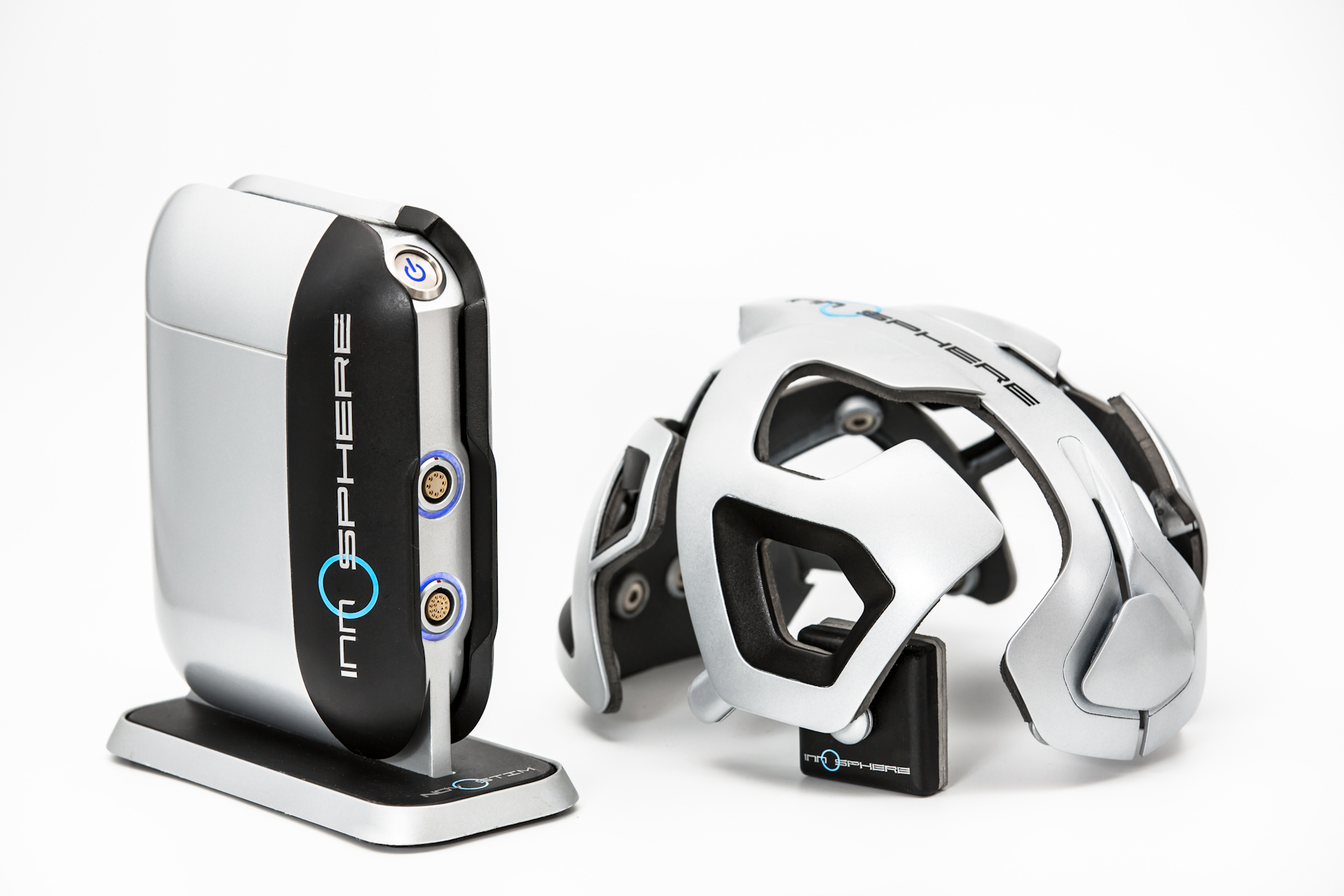 The InnoSphere system gives neurons a “nudge” to communicate better with other neurons in the brain. Photo by Ehab Shukha

The idea for InnoSphere was born when a family friend of Shacour’s “didn’t want to give her kids medicine for ADHD anymore.”

Shacour’s CTO – his cousin Ehab – had read The Stimulated Brain by Israeli professor Roi Cohen Kadosh, who teaches cognitive neuroscience at the University of Oxford. Kadosh and the Shacours hit it off and InnoSphere was launched. Kadosh is now an active adviser to the company.

In a study on 100 boys aged 7-12 at Hadassah Medical Center in Jerusalem, InnoSphere’s technology achieved a reduction of almost 50 percent of ADHD symptoms after 10 sessions.

“We observed a trend of further reduction in the symptom severity even after stopping the interventions. This indicates a strong neuroplasticity effect, meaning that our technology actually induces creation of new neural connections in the brain, which results in a long-term effect,” says Shacour.

Another study was undertaken at King’s College of London with 50 boys aged 8-18, in collaboration with researchers at Oxford and Yale universities.

Cohen Kadosh said the study’s results “are highly novel and important. [This] approach indicates a strong potential to allow an alternative to current treatments, with a significant advantage of long-term effect, rather than patient-dependent on technology or drugs.”

While the current results are far from an outright cure for ADHD, “we have indications according to our studies and clinical trials that this can become real,” Shacour says, “and sooner than we initially had thought.”

According to the Centers for Disease Control and Prevention, 11 percent of children in the US are diagnosed with ADHD. In 2015, $14.5 billion was spent on ADHD medication; that’s expected to reach $25 billion by 2024.

“We started with children because that’s where ADHD disorder is most severely observed and where our technology can be most effective,” Shacour says. “Due to neuroplasticity, the brain of a child is more flexible than a grownup’s.”

Shacour hopes that InnoSphere’s device will one day be able to treat other conditions, including autism, anxiety and depression.

When ISRAEL21c spoke with Shacour, he was in InnoSphere’s satellite office in Berlin, where the company is working toward earning the European Union’s CE mark.

As for approval by the US Food and Drug Administration, “Until recently, the FDA path for technologies similar to ours was very unclear,” Shacour explains.

In April, however, US company Neurosigma received FDA clearance for its non-pharmaceutical nerve stimulation device.

“That will pave our way to achieving FDA approval much faster and with less resources,” Shacour says, claiming that InnoSphere’s results “are much better” than Neurosigma’s and its device is less invasive. (A child using Neurosigma’s Monarch eTNS system must wear an electrode-studded cap while sleeping, for example.)

Shacour himself is not a scientist; he has a degree in business law. But he made a successful exit from Haifa Polymers, which manufactures industrial spandex and packaging products, and was looking for his next opportunity.

Together with Ehab, another relative Gaby (Shakour) and Yousef Badran – all three electrical engineers from Haifa – InnoSphere now has nine people on staff and is raising a Series A round. The company is currently funded by private investors and the Israel Innovation Authority.

InnoSphere hopes to have its product on the market by 2022 for use in doctor’s offices and clinics. The eventual goal, however, is home use following a diagnosis, Shacour says.

That fits with what Shacour affectionately calls the company’s product: “A gym for the neurons.”

UNCOVER ISRAEL - Get the ISRAEL21c
Weekly Edition free by email
Sign Up Now!
Bring Israel's story to life.
Millions of people around the world rely on us to gain a deeper understanding of Israel. We are the trusted source for original content you won't find anywhere else.
You can make a difference. Donate today to support journalism that brings Israel’s story alive.
SUPPORT ISRAEL21c
Read more on:   Health, ADHD/ADD