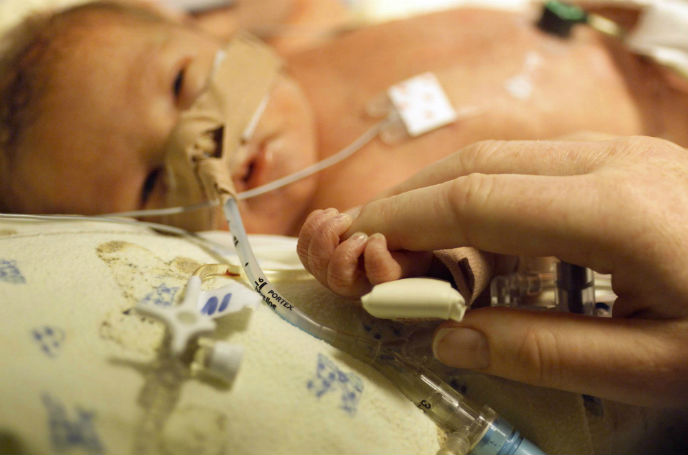 Image of preemie via Shutterstock.com.

The Pneumonitor, a noninvasive medical device now in clinical trials, could make a critical difference in keeping premature babies alive and well.

The CEO of the Israeli startup Pneumedicare  explains that Pneumonitor addresses a common danger for preemies hooked up to ventilation machines to help their immature lungs stay open. High pressure from the ventilator can cause the infant’s tiny air sacs to become overinflated and burst – a condition called pneumothorax.

“Today, monitoring devices for mechanically ventilated patients include sensors in the endotracheal tube and a monitor for blood oxygen saturation, heart rate, blood pressure and breathing rate, but they all detect a respiratory problem late, after distress and some damage may already be present,” says Carmit Levy.

“In the case of pneumothorax, the average time to diagnosis is two hours, and the first alarm doesn’t provide specific information about the source of the problem. In animal experiments, our unique technology detects a potential pneumothorax an hour before it happens.”

The device, which was tested on 70 neonates in three Haifa medical centers, continuously calculates each breath and movement of the chest and upper abdomen using motion sensors. “No other product in the neonatal intensive care unit monitors the chest directly,” Levy says.

Information from Pneumonitor can provide the medical staff an accurate picture of the adequacy and quality of ventilation — in both ventilated and spontaneous breathing patients — and may point to deteriorating ventilation at its earliest stages.

Though Pneumonitor could be used for any patient needing respiratory monitoring at home or in the hospital, Pneumedicare’s founders saw the first great need in neonatal intensive care units and plan to begin their efforts in this market, estimated to amount to $18 billion annually in the United States alone.

Respiratory diseases are the main reason for hospitalization in neonatal and pediatric ICUs, and are directly related to many preemie deaths as well as long-term disabilities such as cerebral palsy, visual impairment, hearing loss and chronic lung disease.

Levy says the product is well along in the regulatory process. The European CE Mark is expected by the beginning of 2015, while approval from the US Food & Drug Administration could take a year and a half.

The company grew out of a collaboration between the biomedical engineering and medical faculties of the Technion-Israel Institute of Technology and Carmel Medical Center, both in Haifa. Dr. Dan Waisman, director of Carmel’s newborn unit and a clinical assistant professor in medicine at the Technion, recognized the need for better monitoring during high-frequency ventilation.

Waisman formed Pneumedicare in late 2007with Prof. Amir Landesberg, a physician and dean of the Technion’s department of biomedical engineering, and Levy, who had just finished her doctorate at the Technion.

The company began at an incubator in northern Israel (now called Explore), with seed money from the Office of the Chief Scientist and private investors.

Now working out of Yokneam, the company has been publishing results of its clinical trials showing the device’s ability to detect early deterioration in ventilation and provide immediate feedback about the effectiveness of the treatment.

“We presented our results at several international medical conferences and got very positive feedback,” says Levy. “We will do trials in collaboration with key opinion leaders in different countries.”

In the United States, two noted neonatologists requested to oversee clinical studies of Pneumonitor: Dr. Eduardo Bancalari of the University of Miami and Dr. James Greenberg of Cincinnati Children’s Hospital.

Greenberg tells ISRAEL21c: “Devices to monitor respiratory rate and effort in newborns, particularly preterm newborns, have been in existence for decades, but the information they provide hasn’t changed in the last 30 years. Pneumonitor offers something quite different – from my perspective, a novel and transformative leap of information – in that it measures respiratory effort and rate and translates that to an index that informs the clinician about important changes, especially deterioration, before they are clinically evident. That’s exciting.”

An early alert to pneumothorax is not only medically preferable but also saves the newborn from the physical and emotional distress of being examined and treated in emergency mode. “If you know well in advance, you can intervene in a more controlled setting, in a way that the baby would not experience that distress.”

Greenberg is eager to see how to translate this early warning into improved care and outcomes. “A study would show us what to do with that information, and we’re very interested in pursuing such studies if appropriate funding is found.”

Pneumedicare is seeking to raise $2 million to achieve FDA clearance and start clinical studies in Europe. “Later we will need $5 million to penetrate the market and establish significant sales toward becoming the standard of care and to develop additional devices for new applications,” says Levy.