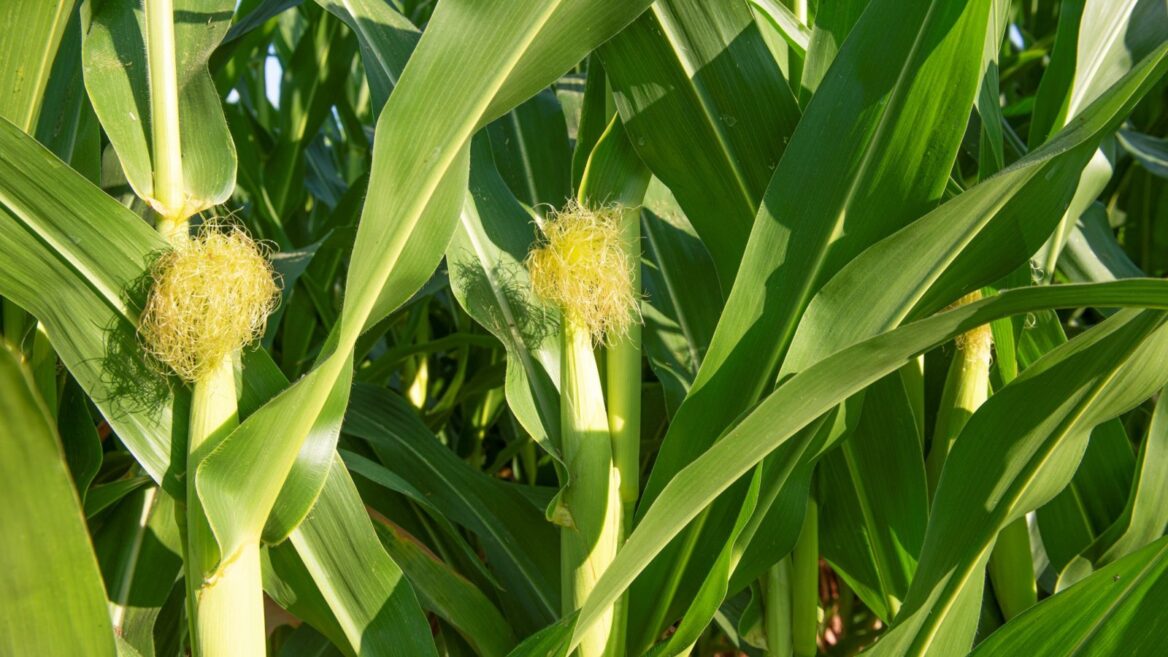 Corn growing in a field irrigated with SupPlant technology. Photo courtesy of SupPlant

It’s a cheeky tag line but, in the case of Israeli ag-tech startup SupPlant, it may literally be true.

SupPlant attaches sensors to crops to monitor their needs: Are they thirsty? Too hot? Too cold? How is climate change affecting their productivity?

By correlating data from the sensors with third-party weather predictions – will there be a heatwave this weekend? A freak morning frost? – SupPlant can provide highly accurate instructions for farmers striving to maximize yields.

But it’s the next generation that SupPlant is most excited about, already in the pipeline: a sensor-less approach that taps into SupPlant’s database of 31 crops in 14 countries to provide predictions at a cost of just $1 a month per farmer.

SupPlant’s sensor-less product is intended for the nearly 80 percent of farmers worldwide who grow crops on less than two hectares of land.

That comes out to 450 million “smallholder” farmers, many of them women, concentrated in the developing world – Africa, Asia and South America – who are mostly ignored by more expensive smart farming solutions.

All in the family

SupPlant’s founders have a long pedigree with the land. President and founder Zohar Ben Ner has 33 years of experience with irrigation and growing crops. His family arrived in Israel in the 1920s and his father, Avner, was a farmer. His son Ori is SupPlant’s CEO. 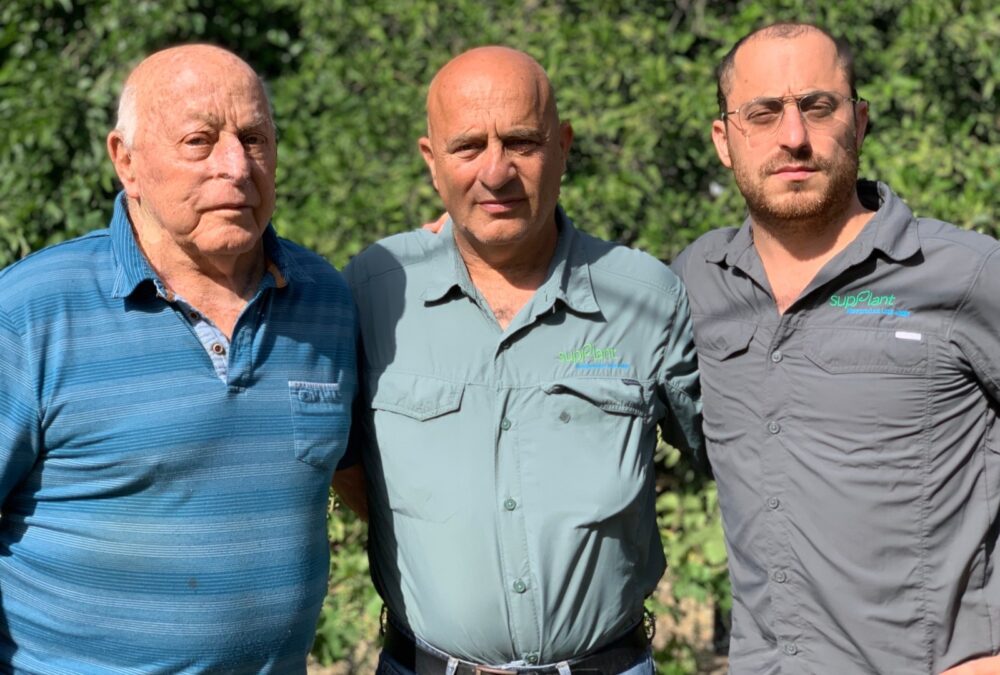 Zohar Ben Ner was in South Korea in 1996 while heading up Israeli drip irrigation pioneer Netafim’s Seoul office. One day, a Russian professor came in holding a box filled with sensors and cables.

“I’m coming from the USSR,” the professor told Ben Ner. “No one believes in my technology, but I think I have something amazing here.”

That technology became the basis of SupPlant’s sensors. Ben Ner was so enthusiastic that he left Netafim and SupPlant was born.

A passion for agriculture

SupPlant’s sensors can measure soil humidity, the size of a plant’s trunk and fruit, the temperature of the leaf, and more.

“We know when a plant gets into a stress condition,” SupPlant’s API Product Manager Itai Langer tells ISRAEL21c.

Langer previously held executive positions at Microsoft and IBM. “I was turning 50. And I felt that something was missing. I decided, I have to chase my dreams. I wanted to make an impact.” Langer says he has a passion for agriculture. “I love the smell of the ground, seeing the fruits, feeling the leaves. It opens up channels that are indescribable. I couldn’t do something like that sitting in my cozy office.”

When a plant gets stressed, it starts to shut down. It stops photosynthesizing, stops growing, and may drop its fruit on the ground.

By installing sensors on the plants, SupPlant creates what Langer calls “autonomous farms.” The sensor data tells the irrigation systems how much water to deliver and when.

“Everyone knows the quantity of water is important,” Langer says. “But we also found that the timing of irrigation is crucial. The textbooks say, ‘Trees do not consume water at night.’ But they do! We learned that from the sensor data.”

SupPlant has a major role to play as climate change ravages farms and economies.

“The difference between an amazing growing season and a disastrous one is about four to five extreme weather events,” Langer notes.

“We have about 15,000 sensors deployed across the world. Next year it should be 50,000 and we’re aiming for a total of 150,000. All this data flows into our cloud database every half an hour. Our database can react faster than the climate itself!”

SupPlant’s extreme weather alert system is based on existing satellite data. “We can tell a farmer that there will be a heatwave in three days, and here’s our recommendation for how to deal with it,” Langer explains.

Take avocados as an example.

Avocados demand a lot of water. By using SupPlant, farmers can differentiate between when the tree needs tons of water and when all that’s required is wetting the soil. That saves the farmer money (and ultimately makes for tastier guacamole).

The latest news is a joint project between SupPlant and the UAE’s Mawarid Holding Investment to use precise irrigation for date trees in the UAE, intended to save at least 20% of water in the first year while achieving better quality dates.

Irrigating palms in the UAE

SupPlant took a similar approach in the United Arab Emirates, where the company’s experts taught farmers how to irrigate their palm trees with 50% less water. (Zohar Ben Ner is managing the company’s work in the Emirates now.)

Sometimes, water is simply not available.

“In India, farmers will visit their plots every seven to 10 days but may not have water to irrigate. So, we say, ‘We’ll give you the critical timing in advance for when to water your crop in the next seven days to prevent damage and maximize growth,’” Langer says.

And that’s how we get to SupPlant’s new sensor-less push.

In places like India and Africa, smallholder farmers don’t have the resources to install sensors across their fields. But SupPlant knows enough about the crops being grown from the data it’s drawn from sensors elsewhere that all it needs to do is match that historical data with weather reports to make its recommendations.

A dollar a month may sound like a small amount, but for a subsistence farmer in Africa, it’s unaffordable and too often out of the question. Also, some farmers do not have a cell phone to track the alerts.

PlantVillage has relationships with 500 women growing maize (corn) in Kenya. It supplies free phones to community leaders, who walk around notifying fellow farmers what to do prevent stress to their crops.

SupPlant aims to reach some two million smallholder farmers across Africa and India this way.

Although the total market is huge – 450 million farmers times $12 a year is nothing to scoff at –SupPlant isn’t giving up its work with big farms.

“We offer them a whole different kind of service,” Langer tells ISRAEL21c. “We have dedicated agronomists who work with them, a control center that monitors their crops 24/7. They can call the switchboard and ask questions. It’s a very different SLA [service level agreement].”

When we spoke to Langer, he was preparing for a trip to Kenya to install sensors on a new variety of tomato that is not currently in SupPlant’s database.

“We’re installing sensors at our own cost, in order to get the data to help all the tomato growers in Kenya,” he says.

SupPlant is doing the same in India, where it’s making 30 farms “autonomous” in order to collect data on the cassava, an exotic fruit currently not in the company’s database.

Langer’s job at SupPlant is all about the sensor-less approach. “By 2023, and maybe even sooner, my part of the business will be the biggest part of the company,” he says.

The timing is right: This past year saw extreme weather events worldwide: drought, fires, Antarctic temperatures usually found only in Europe during the height of summer.

“Smallholder farmers base what they do on what their parents did,” Langer explains. “But the rain spells are growing longer these days and a drop of rain is stronger now –crops aren’t used to that. One might not normally think of irrigating during the monsoon season, but you may need to, based on the data.”

It is this forward, data-driven approach that sets SupPlant apart from its competitors.

“Most of the other companies look at how much water evaporated from the ground in the past,” Langer says. “We don’t look into the past. We look into our database to see what plants like this will need in the future.”

In addition to PlantVillage, SupPlant is working with the largest telecom provider in India to build an app to deliver crop data. There’s another partner in Paraguay.

The 17-person Afula-based company has customers in South Africa, Poland and China, plus a few in Europe.

SupPlant has raised $22 million, including $10 million last June from Mivtach Shamir, Boresight Capital and Smart-Agro. The investments have paid off: During 2020, revenue for SupPlant grew by 1,200%.

Smart-Agro reports that, in the next 40 years, farmers will have to grow as much food as they have in the last 10,000 years combined.

As for the company’s name, it’s a mashup of “plant” (duh) and “sup” which means to gulp, consume or irrigate. Although there’s another intention.

This Israeli startup intends to supplant (that is, to replace) current ways of managing agriculture. If that can help grow more food at lower prices and keep smallholder farmers in business, Langer will have made the most of trading in his title in the C-suite for a life managing avocados, corn and newfangled Kenyan tomatoes.

UNCOVER ISRAEL - Get the ISRAEL21c
Weekly Edition free by email
Sign Up Now!
Bring Israel's story to life.
Millions of people around the world rely on us to gain a deeper understanding of Israel. We are the trusted source for original content you won't find anywhere else.
You can make a difference. Donate today to support journalism that brings Israel’s story alive.
SUPPORT ISRAEL21c
Read more on:   Environment, Technology, SupPlant