Lots of people complain about airplane food, but what about FOD?

That acronym, which stands for “foreign object debris,” refers to stuff on the runway – birds, small animals and fragments that break off planes – causing far more dangerous problems than rubbery rolls on your dinner tray.

The Israeli company XSight Systems has swooped in to prevent harm in a unique way that’s already been adopted at international airports in Boston, Paris, Bangkok and Tel Aviv.

Using integrated radar and electro-optical sensors in a fixed installation on the runway, XSight’s FODetect system “was able to detect the objects of various shapes, sizes, and materials on runway surfaces and perform satisfactorily in nighttime, daytime, sun, rain, mist, fog, and snow conditions,” according to a US Federal Aviation Administration (FAA) report issued in June.

Ever since FOD-related damage caused the supersonic jetliner Concorde to crash in 2000, killing 113 people, the race has been on for a solution to this problem. And the made-in-Israel sensor system, tested at Boston’s Logan International Airport since 2007, meets all FAA criteria.

That’s quite a coup for the manufacturer, XSight Systems of Rosh Ha’Ayin, in the north of Tel Aviv. The company began only in 2005 and employs just 55 people.

FODetect resulted from about two years of R&D carried out by six Israelis involved in developing remote sensing guides for the Israeli military industry. 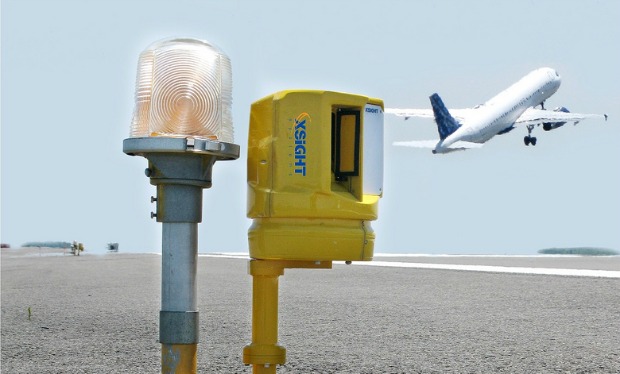 “As opposed to other companies that used existing technology for this purpose, we started at square one and ran through various technologies to find the best solution,” says Aviv Goner, XSight’s vice president for research and development.

Aiming to offer a product for commercial airports, they came up with a device that integrates radar and electro-optical sensors in a fixed installation on the runway.

Boston was the first airport to test it out, and following an advisory circular from the FAA at September 2009, the device was bought by international airports in Paris, Bangkok and Tel Aviv. Others are expected to follow.

Goner says that aside from its sophisticated technology, the key to FODetect’s success is its positioning on the runway edge lights. “Where to put the sensors was the start point,” he tells ISRAEL21c.

This is what made it stand out from three other ideas the FAA tested. Two of them, like FODetect, function 24/7 but had to be affixed to towers. The fourth idea was a mobile unit mounted on cars doing a four-time-a-day patrol of the runways. The fact that FODetect works continuously, right on the runway, made it a winner.

Chief technology officer Oded Hanson says the technology involves high-grade radar and video sensors for detecting FOD. “Each one has pros and cons, so we use both,” he explains.

In 2002, when an investigation committee concluded that the cause of the Concorde disaster was a foreign object dropped onto the runway by a DC-10 airliner just before the Concorde’s ill-fated takeoff, the future founders of XSight took note.

“The committee recommended looking for solutions for automatic monitoring, and we started looking into it,” says Goner.

Quantifying the savings realized by FODetect is difficult because so many factors are involved, including secondary expenses impossible to measure — such as the effect of delays on an airline’s reputation.

“There are several links in this chain: airlines, equipment companies and the airports themselves. We know that the system is detecting many objects in all these airports,” says Goner. “It’s obvious that if you can prevent one accident, even without casualties, you can cover the cost of the system.”

FODetect has other significant advantages for airport management in surveillance and security, Hanson points out. “We provide them with eyes they never had before, even aside from detecting FOD. If they have a request to see something on the runway, they can get live video without going there physically.”

Goner notes that any kind of airport is a likely customer. “The whole aviation industry is a potential market for FODetect regardless of location, and regardless of whether it’s for military or civilian airports,” he says. “This is just about airplanes on runways.”