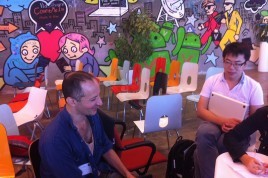 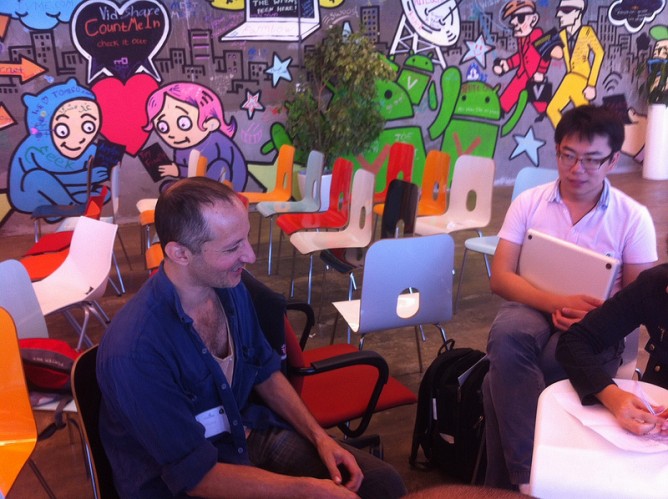 Developing apps for the developing world: That was the theme of the Dev4Dev Cleanweb Hackathon  over two November days in Tel Aviv.

The mission was for 12 teams to work on individual challenges during the course of 36 straight hours –– with plenty of beer in sight –– to come up with life-changing solutions for the developing world.

I proposed an idea that could help solve world hunger and reduce greenhouse gas emissions, but secretly I wanted to get close to the high-tech techies of Tel Aviv.

A big bonus was finally getting to visit the Google Campus in Tel Aviv, which supplied the room for organizers from the IsraelDev network and Terralab Ventures .

We were programmers, interface developers, engineers, physicists, business people, economists, clean-tech investors and dreamers –about 200 in all, laboring to create working apps by the time we left Google Campus on Friday afternoon. Some had come from other countries just to learn the “secret sauce” of Israel as the startup nation.

Entrepreneurial hopefuls in Israel usually look to Silicon Valley and the United States as the market for the next big thing and the next big exit. The idea behind this first-ever hackathon of its kind in Israel was to help shift the focus to unmet markets with trillions of dollars in spending potential.

Some had rough ideas for apps that could give safer rides for women; others thought about smarter food collection; or creating parity between different kinds of energy inputs in Africa.

Our team was a group of passionate people who work for different organizations in their day jobs – for example, as consultants for the United Nations or volunteers for Engineers Without Borders. We laughed, we fought, we built, but during and after the event we all understood the experience was invaluable and bigger than winning the challenge. The goal was develop apps to solve developing-world problems.

The event linked me, an ideas person, to that sometimes inaccessible world of hackers, developers and programmers in Israel–– usually quiet and modest guys (sometimes girls, too!) who do what they do best: finding solutions to difficult technical problems.

I don’t get to meet people like this every day, and based on the feedback I got the event was also a big bridge for those hackers. They met marketing people and business people who can help them translate great technological solutions to a bigger platform in the world at large.

Walking to the elevator after the first day of “hacking,” I looked down the hall and noticed a very interesting group of Africans, Americans, Europeans, Chinese, Koreans and Israelis. I was jealous of the party going on in that room until I realized it was one of the groups from the same event I was leaving.

By the end of the 36 hours, an international panel of clean-tech and high-tech judges had to pick a winner. They chose Platfarm, an app that helps small stakeholder farmers connect with delivery trucks in developing nations. The app looked like it was packaged and ready to go.

Another winner was Smart Rider, an app that sends alerts if a woman feels threatened in a car or bus (an all too common problem in countries like India).

In third place was SOG, a company that makes “smart” off-grid solutions for people in countries that may have variable energy sources like solar, battery or diesel, but no way to link them together to share the burden and the bills.

Start Up Farm, our idea to make plug-and-play farming units for people in Africa, didn’t win. I know I sound like an American team coach when I say this, but I was just really happy to play the game.

I encourage anyone who wants to be a part of Israel’s startup nation culture to get into the country’s next hackathon. They come in all shapes and sizes, from mechanical engineering events with a purpose to make nothing that’s useful, or hackathons to make the next big thing in clean-tech, like Tent Tech (www.tenttech.org) sustainable technology camp.

Even if you don’t have programming skills, you can contribute by designing logos, strategizing, babysitting (for children or rogue programmers who are annoying the development team), feeding people, or giving back rubs at the end of a long day. Going to a hackathon — a boot camp for the startup nation — is crazy, fun and off the wall. Better than any reality show times a thousand, it may make you part of the next big thing.

UNCOVER ISRAEL - Get the ISRAEL21c
Weekly Edition free by email
Sign Up Now!
Bring Israel's story to life.
Millions of people around the world rely on us to gain a deeper understanding of Israel. We are the trusted source for original content you won't find anywhere else.
You can make a difference. Donate today to support journalism that brings Israel’s story alive.
SUPPORT ISRAEL21c
Read more on:   Spotlight on Israel