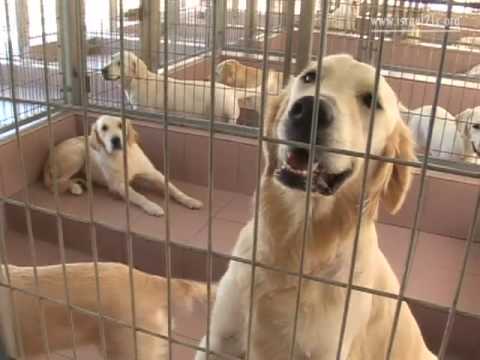 There is only one place in the country where Israel’s visually impaired can be matched up with guide dogs that respond to Hebrew commands.

Director Noach Braun says that 18 years ago he realized his dream that a visually impaired person in Israel could gain independence “via these beautiful, wonderful dogs,” with the founding of The Israel Guide Dog Center for the Blind.

Braun is referring to the white and black Labradors and Golden Retrievers at the center that are bred specifically to become guide dogs. The center is the only place in Israel where seeing-eye dogs are raised, trained to respond to commands in Hebrew and matched with visually impaired owners.

Before the center opened, blind Israelis had to travel to the US or elsewhere to get a dog that understood only English. There is still a waiting list for dogs.

When they’re two months old, the dogs are given to foster “parents.” After being trained to guide sighted people for a year, they are matched up with blind people, with whom they develop a very close bond.

One new owner of an Israeli seeing-eye dog says that since he has had his dog Turner, he feels that people respond to him differently and don’t fear his blindness. Braun contends that the “dogs enable [blind] people to be equal in society, proud and happy with the dogs.”