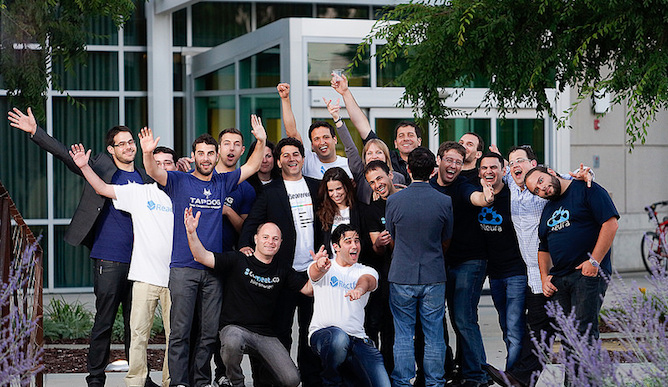 Some of the entrepreneurs at UpWest Labs. Photo by Maki Oshiro.

Shuly Galili had been working for a dozen years at the California-Israel Chamber of Commerce in Silicon Valley when she decided to take her passion for growing Israeli business in the US to a higher level.

Two years ago, she cofounded UpWest Labs, a high-tech accelerator based on the model of YCombinator and Techstars.

She and her partners take a handful of Israeli startups for four months at a time, and run them through basic training at a startup bootcamp in Silicon Valley, the place where every Israeli company aspires to be.

What happens inside UpWest Labs could make some great reality TV fodder. “We do have offers,” says Galili, “but it’s not in our plans. We are running an accelerator, not a TV show. But yes, it’s a very rich environment.”

Like a mama bear, Galili nurtures, supports and networks fresh companies through the course of their four-month journey and beyond.

Armed with several thousands of dollars in seed funding, some 33 companies to date have passed through the UpWest Lab. In total, some $20 million in follow-up seed and investment money has been raised by these companies.

They include the “Internet of things” firm Neura, which is connecting smart devices to a central brain; HoneyBook, a husband-and-wife team taking on the challenge of wedding planning; and Sentinel Labs, a security company looking to protect identities in social media.

About 70 mentors — in addition to Galili and co-founders Gil Ben Artzy, formerly in acquisitions at Yahoo, and Liron Petrushka, a startup investor and serial entrepreneur — provide Israeli startups with ideas and knowledge.

“Some are successful like Noam Bardin from Waze, who comes regularly, but it could be people from strategic roles at Facebook, Google or Dropbox, or people who are experts in domains in user interface or marketing or growth hacking,” Galili tells ISRAEL21c.

“These are people who really have seen, and who have worked with, products that scale. Scale is really important when you bring Israeli startups to Silicon Valley. The reason we started UpWest Labs is that we felt the single most important challenge for a lot of the entrepreneurs is not raising money or finding investors. They have phenomenal technology and knowhow, but are miles away from their customers and market.

“Because of that, they have a delay of being able to compete with similar technologies here, or to understand if what they’ve built is something the customers want,” says Galili. Being based in Silicon Valley gives the opportunity of running a pilot with some of the giants.

Exposed to more than a culture of silicon

“Israelis are building products for consumers who are mainly Americans, initially. It’s critical to live and breathe the consumer’s environment,” she says. “How do they view privacy, for instance? This is so different than in Israel.

“Or, how do you tell your story. The Israeli story is different than what people are used to hearing over here. Here it’s, ‘Oh I just graduated Stanford, spent five years at Google…’ So we help Israelis tell their unique stories, like the one who had only five customers but $200,000 in revenue from them.”

Israelis, no matter how “hot” their company was in Israel, can be humbled in the Valley, says Galili. “There is a learning curve in how you communicate and follow up on meetings. How do you translate the response you get from people? It sounds so confusing for them. People here are not direct. They don’t like to say ‘no.’ They sugarcoat, which is confusing for Israelis.”

Galili and Ben Artzy had known each other for years before partnering in UpWest.

“We worked hand in hand a lot and saw the same companies who came to Silicon Valley. A lot of the time, Gil and I were working in parallel. I was at the chamber and he was at Yahoo. We kept running in similar circles. Then our third partner joined,” says Galili.

What’s cooking in the lab now? Seven new companies arrived in January to start up at UpWest Labs, which runs on a for-profit model, acquiring a stake in the company for the opportunity of a lifetime to land in Silicon Valley. These newbies will join an extensive alum group of 150 entrepreneurs.

If Galili has her way, the next startup will launch direct flights from the Valley to Israel so that business between the two natural partners in technology can be made easier and smoother.

For more on UpWest Labs, see their website: http://www.upwestlabs.com

UNCOVER ISRAEL - Get the ISRAEL21c
Weekly Edition free by email
Sign Up Now!
Bring Israel's story to life.
Millions of people around the world rely on us to gain a deeper understanding of Israel. We are the trusted source for original content you won't find anywhere else.
You can make a difference. Donate today to support journalism that brings Israel’s story alive.
SUPPORT ISRAEL21c
Read more on:   sentinel labs, honeybook, upwest labs, Silicon Valley, Israeli innovation, Technology, Innovation