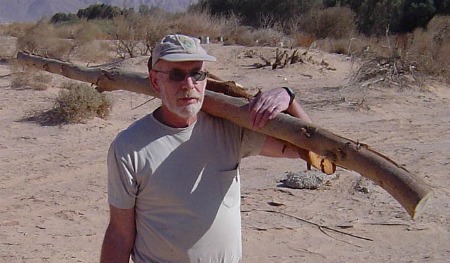 Photo courtesy of Tel Aviv University
Prof. Amram Eshel with a sample of wood from the Tamarix forest.

Leave it to Israeli scientists to figure out a way of growing trees in the barren sands of the Arava Desert.

The trees aren’t just meant to look pretty. This pollution-reducing forest planted over the summer is soaking up harmful excess carbon dioxide from the atmosphere and releasing beneficial oxygen. Another “green” bonus is that the trees are nurtured with recycled sewage water and saltwater.

The project is a research collaboration between Tel Aviv University’s Porter School of Environmental Science, the Hebrew University in Jerusalem and the University of Tuscia in Viterbo, Italy. The Italian Ministry for the Environment, Land and Sea is financing the study, which is outlined in an article soon to appear in the European Journal of Plant Science and Biotechnology.

The environmentalists involved are hopeful that the project will not only help reduce humanity’s carbon footprint but will also demonstrate how all countries could establish a local plant species on land thought unusable, in order to improve air quality. India, central Asia and Africa in particular have large swaths of such land available, including the vast Sahara Desert.

Once the trees are mature, it’s possible that they could become a renewable source of biofuel to reduce dependence on fossil fuels. This is another area of great interest to Israel and just about every other country on the planet.

TAU Life Sciences Prof. Amram Eshel explained that maintaining current forests is not enough to offset harmful human carbon output. Many countries have therefore been converting fertile agricultural lands into forest in an effort to diminish carbon dioxide and increase oxygen in the air.

“When you take the overall carbon balance of converting agricultural land and freshwater into energy products, you may not gain that much,” said Eshel. “You’re investing a lot of energy in the process itself, thus releasing a lot of carbon into the atmosphere.” 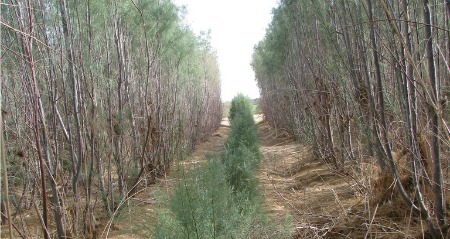 Photo courtesy of Tel Aviv University
The Tamarix grove in the Arava is soaking up harmful gases from the air.

To conserve precious stores of fresh water, the researchers chose to use low-quality recycled sewage water as well as saltwater that’s the by-product of desalination plants. Then they searched for a plant species hardy enough to successfully grow in desert conditions.

They settled on Tamarix, a botanical genus that includes salt cedar trees and is indigenous to old-world deserts. In the Arava — a section of the Great Rift Valley running from the southern end of the Sea of Galilee down past the Dead Sea to the Gulf of Aqaba near Eilat — they planted 150 different varieties of Tamarix in a common garden setting and also in denser fields the way commercial crops are grown. 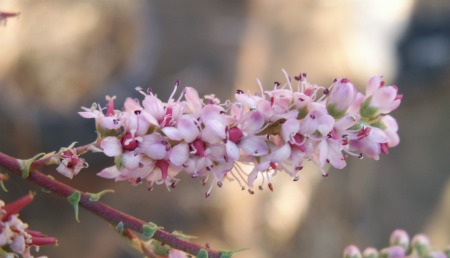 Now the researchers are starting the hard work of analyzing the amount of carbon dioxide the crops have successfully captured from the atmosphere. If that can be quantified, they will be able to recommend specific growing guidelines to other countries.

If they can also be used as biofuel, the potential is almost limitless. Until now, growing crops dedicated to fuel production has been controversial, since converting agricultural land could have the side effect of creating food shortages.

Arid and previously unused desert lands provide an ideal solution, Eshel says. Israel doesn’t have enough of this land to make a large-scale operation economically feasible, but places like the Sahara Desert could be ideal.