At Essene Farm, in Even-Sappir near Jerusalem raw-food cuisine is served every Tuesday.

Ecotourism in the Negev desert is rapidly expanding in parallel with the region’s overall development. Zimmerbus, created by Eyal and Avigail Hirshfeld from old vehicles headed for the scrap heap, is one especially outside-the-box destination.

“The idea came out of need,” Eyal Hirshfeld tells ISRAEL21c. “We brought one bus to refurbish as a guest room for friends and family because we didn’t have enough space in our house.”

The Hirshfelds and their children covered the metal shell with the natural building material adobe (made from sand, clay, water and organic material) and roofed it with date-palm leaves. Inside, it was outfitted with as many natural materials as possible. “People liked the idea and suggested making it into a zimmer,” says Hirshfeld.

They purchased and renovated two more buses – one a ‘concertina’ model large enough for families – and went into business. A recycling system using wastewater from the zimmerbuses to irrigate an organic garden is planned, along with an organic vineyard.

The abundance of ‘green’ lodging, organic eateries, biking and hiking trails, bird-watching sites, ecological study tours, and more, made Israel the perfect host for the fall’s eco-tourism conference sponsored by the Organization for Economic Cooperation and Development (OECD).

The greening of Israel’s tourism industry is an ongoing priority, according to Tourism Minister Stas Misezhnikov. The ministry’s dedicated and informative site, Travelgreenisrael.com, complements its two-year promotion, ‘Israel: One Hundred Years of Green.’ The campaign is marked by a series of projects in cooperation with Eco & Sustainable Tourism Israel, the Nature and Parks Authority, Jewish National Fund, and the Society for the Protection of Nature in Israel.

For both domestic and foreign travelers, green accommodation in Israel varies from campgrounds to desert huts, to upscale resorts offering natural therapies and healthful cuisine.

One of the newest arrivals to the ecotourism scene is Zohar Katzir’s Essene Farm in Even-Sappir, a small mountaintop village just west of Jerusalem. 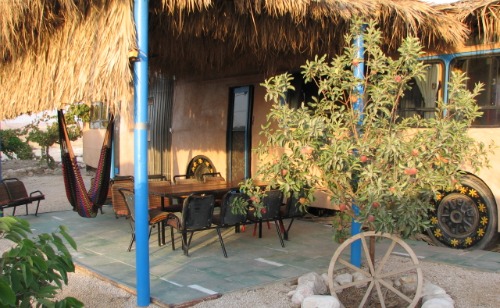 In the Negev, ecotourists can stay at the Zimmerbus, a unique guest room made out of buses destined for the scrap heap.

In a few months, Katzir will open guest lodges roofed with recycled tiles, insulated with thick straw bales, and connected to biological purification pools for waste. Meanwhile, guests arrive on a daily basis to learn natural personal hygiene and organic and ‘permaculture’ gardening techniques, and to explore the forest and springs below. “We wish to see people developing spiritually through love, and work closer to Mother Nature,” Katzir tells ISRAEL21c.

Tuesday evenings, Essene serves up raw-food cuisine in its mud-and-straw main building outfitted with a gray-water purification pond and a water-free compost commode.

Some of Israel’s green lodging options, like Essene Farm and Herzliya’s energy-conserving Sharon Resort Hotel, are close to major population centers. Others are more rural, such as Cabins in the Mist in the Golan Heights, with its hand-built, ‘technology-free’ wooden cabins surrounded by organic cherry orchards.

While ecotourist facilities are popping up all over the Negev Desert and the Arava, in the Great Rift Valley, most are situated in Israel’s lush Galilee region.

Two of the many Upper Galilee eco-resorts are Vered HaGalil, where guests can experience alternative therapies such as reiki and energy healing, and the Schnabel Zimmer (country inn), an award-winning site featuring five cabins in a permaculture environment with an accompanying vegetable garden, goat pen and chicken coop.

In the Western Galilee, there’s Back to Nature via the Bible, an ecological village offering opportunities to learn about medicinal plants and herbs, stomp grapes, grind grain, and crush olives for oil. And at Indigo Guest House, an environmentally mindful B&B, you’ll be served meals from locally-grown organic ingredients irrigated with recycled gray water from the lodges.

One of the Lower Galilee’s niche ecotourist spots is the HooHa Cyclists House. Here, accommodations and services are geared specifically to those touring Israel atop two-wheelers. And there are bound to be many more of these as the Tourism Ministry begins investing more than NIS 100 million in a 3,000-mile network of new bike paths, including a national trail. Two major cycling paths near and around Lake Kinneret (Sea of Galilee) are under construction.

“This infrastructure will also make Israel an attractive destination for cyclists from around the world and a marketing program will be prepared accordingly,” Misezhnikov recently announced.

Adventurous ‘voluntourists’ who want to explore the country’s eco-system through an organized program have several options. GoEco, established in 2005, offers a large selection of projects from coral reef conservation in the Red Sea and eco-building in the Arava to wildlife conservation at a biblical nature reserve.

At Kibbutz Lotan in the Arava, voluntourists are housed in straw-bale-and-mud geodesic domes and accompany kibbutzniks in tasks such as organic gardening, alternative/natural building, maintaining nature trails, arranging educational workshops, and working in the Lotan migratory bird reserve.

Ecologically-minded day trips are another option as Israel invests in new projects such as Ayalon Park’s 75-acre recycling plant atop a former garbage dump near Tel Aviv. Visitors can watch household and industrial refuse, garden debris, and corrugated paper as it’s transformed into electricity, clean irrigation and washing water, and agricultural fertilizer. In the Visitors Center decorated with recycled art, kids can take part in hands-on workshops.

The Tourism Ministry has invested millions of shekels since the early 1990s in the development of a tourist infrastructure at Lake Agmon in the northern Hula Valley, a critical region for migrating birds and other wildlife. Most recently, the Ministry and Jewish National Fund each invested NIS 700,000 (about $194,000) to construct a southern observation point on the lake. This newest eco-tourist attraction is expected to open within a few months.