The most common way to get from one point to another isn’t a car, bus or bike. It’s an elevator. Yet the electric lift hasn’t changed all that much since its 19th century origins.

The Israeli company Escalade is revolutionizing the industry with its Intelligent Connected Elevator Panel (iCEP), a software-driven platform designed for smarter and safer programmed elevator operation.

Available for any new or existing elevator, the iCEP has built-in capabilities for emergency lighting, message announcement, music, two-way intercom, wireless communication and adaptations for people with visual or auditory impairments.

Future iterations will support customized commands, displays or operations such as voice and face recognition, biometric sensors, smoke detectors and video advertising targeted to the time of day and the particular passengers (for instance, lunch specials at the corner deli). 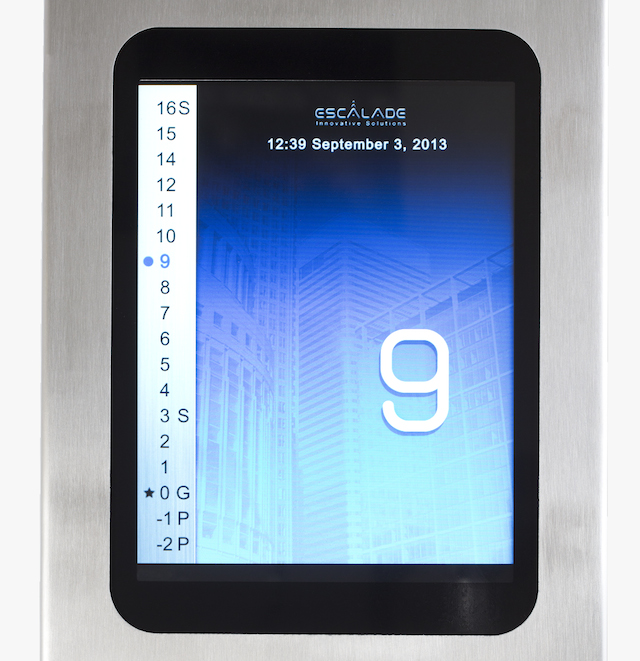 Escalade is bringing machine-to-machine capability to a stodgy industry.

About 20 Israeli buildings already have beta Escalade systems installed, mostly in central Israel near the two-year-old company’s Kfar Saba headquarters — Tel Aviv, Ramat Gan, Givatayim, Lod, Petah Tikva. One of these installations is programmed with a unique password for each floor, limiting access to authorized passengers.

“The system can always be upgraded after the initial installation,” says VP Marketing and Business Development Guy Gotlieb. “Let’s say a tenant wants to add a security camera. iCEP can be expanded to accommodate that with remote upload of software.”

“We were approached by a large international player with whom we are now discussing how to use our technology inside their implementation,” he says.

In a market worth an estimated $70 billion, it is not surprising that Escalade was among many companies at Interlift touting their high-tech ideas. However, says Gotlieb, “solutions such as ours do not exist. Some elements of it are being incorporated by other companies, such as displays and emergency communication, but our package is unique.”

Cohen, formerly the hardware team leader at VeriFone and Electro Scientific Industries, understood the need for smart lifts better than most. His father has been in the elevator business for 40-some years.

“He grew up hearing stories around the dinner table about the problems of elevators,” says Gotlieb. “As a talented engineer, he thought about how to bring improvements and added value to such a conventional and a bit outdated industry – how the company, the installer, technicians, property managers and passengers could all benefit from innovative solutions for this market.”

Escalade’s core team comes from VeriFone and other Israeli companies that produce embedded products for industries such as banking and security.

“The most important thing our product brings, aside from ease of use, is its machine-to-machine [M2M] capabilities,” says Gotlieb.

M2M, widely seen as the next wave of industrial development, describes technologies that enable wireless and wired systems to communicate with other devices.

“This is one of the hottest trends in embedded products, and it’s a core element of our system. If you implement it even in an old elevator, all of a sudden you’re connected to the cloud, to applications that better maintain and control equipment and allow you to react better to emergency situations.”

Gotlieb says it is estimated that six or seven million of the world’s elevators are in need of upgrading or replacement to meet safety and accessibility standards. “When an elevator company has a tender to retrofit an elevator, they can use our equipment and pay a similar price for added value.”

Escalade has thus far raised $800,000 from private investors, and seeks a few hundred thousand more to ramp up the execution phase. “We have a tremendous amount of knowledge in how to design and market and how to produce a very efficient solution. We are ready for production,” says Gotlieb.