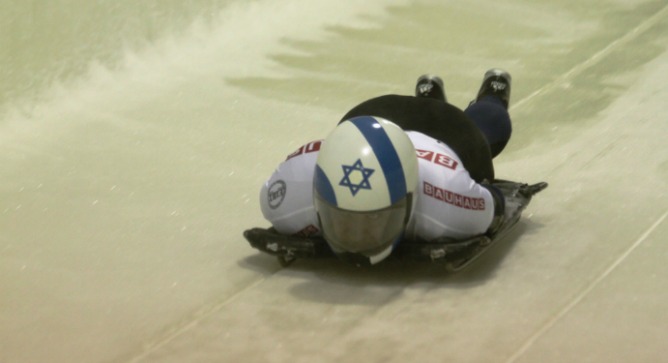 Brad Chalupski slid his way to a 29th place finish at the track at the 2012 World Championships in Lake Placid.

Does Israel have a bobsleigh and skeleton team? “I don’t know,” said the official spokesperson for the Israel Olympic Committee (IOC).

Yet ask skeleton athlete Bradley Scott Chalupski and he’ll tell you that not only does an Israeli bobsleigh and skeleton team exist, but he hopes to be its representative at the Winter Olympics in Sochi, Russia.

This temperate Mediterranean country seems an unlikely source of Winter Olympians. But the New Jersey native, who now calls Jerusalem home, has been representing Israel on the International Bobsleigh and Skeleton Federation (FIBT) World Cup Circuit for the last three years in a sport that is practically unheard of in his new country.

It might bring the movie Cool Runnings with its improbable Jamaican bobsled team to mind for many, but Chalupski and the federation backing him are totally serious.

“Anyone who thinks I’m a novelty act is welcome to come shadow me for a week. They won’t think that for long,” the 28-year-old Chalupski tells ISRAEL21c, between races at Park City, Utah.

“He’s not going to make a fool of himself,” says David Greaves, secretary general of the Israeli Bobsleigh and Skeleton Federation. “The World Championships are the Olympics of that sport. He’s competing with the best of the world on the most treacherous tracks in the world.”

So far, six Israelis have competed at the Winter Games — five figure skaters and one short-track speed skater. Chalupski would like to be the seventh representative.

For Chalupski, who has put a law career on hold, his love for skeleton (super fast winter tobogganing for one) was sparked while watching the 2006 Winter Olympics.

Competitors in this daredevil sport plunge headfirst 70 miles per hour down a frozen bobsled track that drops 40 stories — on a small steel-and-plastic sled with no brakes or steering. The only way to stop is to hit the ice. 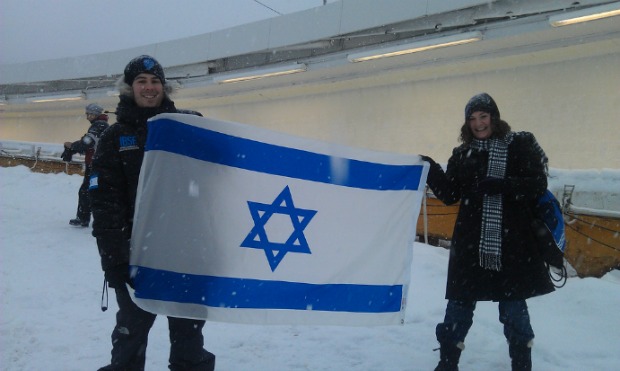 Israeli Bobsleigh and Skeleton Federation CFO Philip Nathan and Chana Anolick hoist the Israeli flag near the end of the track.

Not surprisingly, Chalupski says his mother, a retired computer programmer, cried the first time he told her about his plans to be a skeleton racer.

“She has gotten over that initial fear now, kind of,” says the son of a Jewish mother and a Catholic father. “Are my parents interested in what I am doing? Come out to races to cheer me on? Make donations to the team? Absolutely. Do they wish I would do something else? Absolutely.”

But Chalupski, who waits tables to support his training and has already spent over $10,000 of his own money, is committed.

He started out with the US Bobsled and Skeleton Federation six years ago. In 2010, he didn’t make the US national team trials and headed back to a law apprenticeship.

And then the original Frozen Chosen – as they dubbed themselves back in 2002 – stepped in. Andy Teig, a paramedic who lives in Lake Placid and now coaches Chalupski, and Aaron Zeff, today CEO of a private real estate investment company, came up with the idea for the Israeli Bobsled Federation 10 years ago. David Greaves, today director of development and marketing for the Jewish Foundation of Manitoba, Canada, joined a year later.

“Traveling the world as an Israeli and when you’re identified as an Israeli – with a star of David on your suit and bobsled – that experience was very special for all of us,” Greaves, who was the brakeman, tells ISRAEL21c. “We decided to keep that experience alive and we looked for young people who want to continue.”

And so Teig called Chalupski.

“The initial decision to compete for Israel was one which I spent nearly two months considering,” says Chalupski, who officially took Israeli citizenship last May.

Concerned about being labeled an opportunist, he set off on a soul-searching mission regarding his connection to Israel and Judaism. His girlfriend — whose father is a rabbi — said to him: “You are a Jewish man being asked to represent Israel in a way in which, at this moment, you are uniquely capable of doing. So you have to say yes.”

Chalupski says representing Israel is “about the simple beauty of being Jewish. An identity, a heritage, a family, that transcends national boundaries and is unique in the history of the world. A heritage that it is now my honor to represent in some small measure on the world stage as I hurl myself head-first down an ice chute at 75 mph, for whatever such a gesture is worth.”

When he stands at the starting gate, decked out in blue-and-white spandex with stars of David on his helmet and suit, Chalupski says he feels a “responsibility to represent the Jewish people, past, present, and future, and Israel, with dignity and to the best of my ability.”

He is currently ranked 60th in the world, which is the cutoff for making the Olympics. But Chalupski still needs funding and authorization from the IOC.

Ten years ago, the IOC sent a letter to the International Bobsleigh and Skeleton Federation confirming the affiliation of the Israeli Bobsled Federation. But to represent Israel at the Olympics, athletes must meet criteria that the IOC outlines. At the moment, this measure does not exist.

“We’re not on the radar for them,” says Greaves. “We’re trying to build the best possible case for the IOC to want to send us.”

In October, the Israeli Bobsleigh and Skeleton Federation was officially approved for tax-exempt status by the US Internal Revenue Service as a public charity.

“Fundraising is an important part of the sport for countries that are not traditional winter sport countries,” explains Chalupski. “Equipment is an essential part of success, and good equipment costs money. Traveling to competitions is also very expensive.”

Asked what his personal goal is, Chalupski says: “To carry the Israeli flag before the world as I walk into the Olympic Stadium, to bring pride to Jewish people everywhere, and to know that I did my very best at doing both.”