Commuters who face the daily grind of getting to work on time will be happy to hear about a new invention from Israel: an all-electric scooter called the MUV-e that helps people go the distance between the commuter bus, car park or train to the office and home again.

It was those last five miles commuting inside cities where he worked –– congested cities like Tel Aviv, Milan, Rome and Torino –– that put a strain on Amir Zaid when he was working for Fiat and Ferrari as an interior and 3D automobile designer.

The problem was not commuting between cities, as many Israelis and Italians do, but slogging through the traffic jams once inside the city, he tells ISRAEL21c.

His industrial engineering wheels started turning, and with partner Benny Shimon, he formulated a new way of moving around the city –– one that was fast, relatively safe, environmentally friendly and convenient. They aimed for no less than creating a new kind of ride.

“We didn’t want it to be awkward or force people to get used to gyroscopes or strange mechanisms,” says Zaid. He knows about high-tech, as part of the team that designed the interior of the latest ultra Ferrari model, yet to be unveiled. But he wanted to create something mechanically low-tech so that the broadest range of people could take advantage of it.

The gyroscopes used in the two-wheeled Segway, though impressive, take a considerable amount of time getting used to, he tells ISRAEL21c. The Segway and other mobile scooters are too heavy and large to carry up stairs or onto a bus, and storage and security are other issues in city settings.

What emerged from Zaid’s fantasy form of transport is the MUV-e scooter. It’s a foldable, all-electric sporty three-wheeler that can connect with your smartphone, turning it into an odometer, gas gauge, speedometer and navigator. The phone can control the folding and opening of the scooter, and sits on the handlebars during the ride. 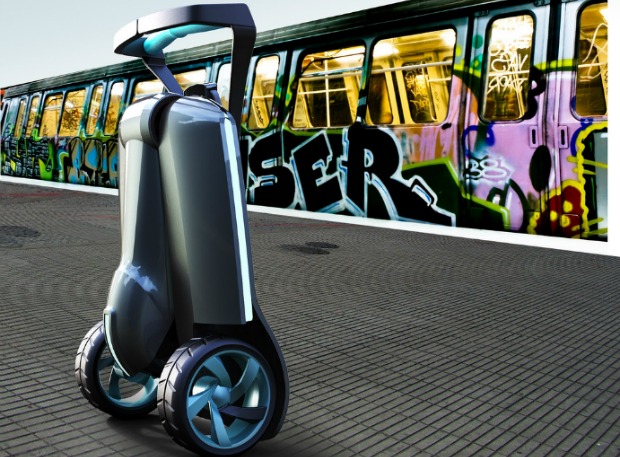 When folded, the scooter looks like a suitcase on wheels.

Users legs are positioned side by side, rather than one behind the other.

“It’s so simple, really. I am speaking with a lot of people and they are all saying, ‘Let me have one.’ That’s because public transportation doesn’t work even in big cities like in Italy. Or it works, but it’s not so great,” says Zaid.

“Everyone needs the freedom to move around by themselves while not depending on anyone else. I was watching commuters arriving to work with those small suitcases on wheels after the weekend and thought, why not combine this trolley concept with transport?” relates Zaid.

“We searched for a simple solution with some folding capabilities –– something that anyone can use within two minutes of trying it. What results is that every user will know how to drive the MUV-e in two minutes.” 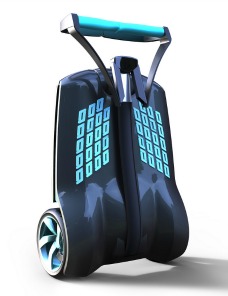 That was a year and a half ago, and now the MUV-e prototype is ready for production pending a $500,000 investment.

The MUV-e will be sold at an attractive price of about $2,000 for the basic version or $3,000 for a “souped-up” version with a bigger battery pack, customized skins and e-connectivity. Other accessories, such as seats, will be available too.

When fully charged, the MUV-e can go about 10 miles before needing to plug in. The battery pack will be fitted with a standard 110- or 220-volt plug, depending on the country where it’s sold.

Estimated driving speeds peak at about 20 miles per hour, subject to local laws.

With a total weight of about 25 to 30 pounds depending on the model, the MUV-e is made to fold and carry so that the stable three-wheel design doesn’t take up much space in the office, on the bus or in the micro-apartment closet. When folded, it resembles a folded suitcase trolley with handle.

Zaid hopes his first ride will launch a platform of new kinds of trolleys and scooters –– an expanded base of products for every age under the sun.