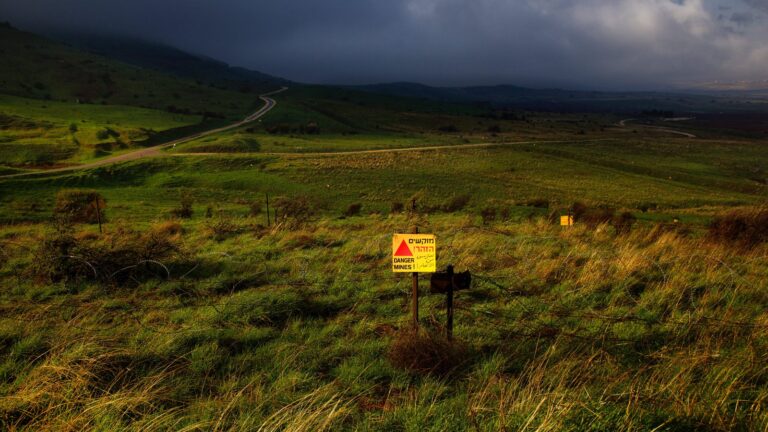 A sign warning of landmines near the border with Syria in the Golan Heights in northern Israel. Photo by Doron Horowitz/Flash90

Researchers who discovered how to utilize fluorescent E. coli bacteria to locate landmines have recently further mutated them so that they are now both more sensitive and emit a glow visible to the naked eye, eliminating the need to scan the ground using laser light beams.

In 2017, researchers from the Hebrew University of Jerusalem molecularly engineered E. coli to emit a fluorescent light upon coming in contact with explosive vapors accumulated in the soil above landmines. This light was recorded using a laser-based scanning system so the mines could be located safely from afar.

Now, in a study published in New Biotechnology, the researchers describe how they replaced the green fluorescent protein in the mutant E. coli strain with luciferase, an enzyme that produces bioluminescence visible to the naked eye.

“To effectively identify landmines and especially old landmines that are perhaps already emitting fewer toxic vapors but which can still explode, it was important to us to increase the sensitivity of the genetic sensing circuit,” explained researcher Benjamin Shemer.

These engineered bacteria are “the most sensitive biological sensors to detect traces of explosives ever described,” he adds.
To demonstrate how they work, the newly mutated bacteria were placed in tiny polymeric beads that were scattered over ground containing buried explosives.

“The difference between the soil containing explosives and the clean soil could be clearly seen,” said Prof. Shimshon Belkin, who led the study. “The quantification of the signal showed a very strong reaction from the bacteria some three hours after they were scattered on the ground.”