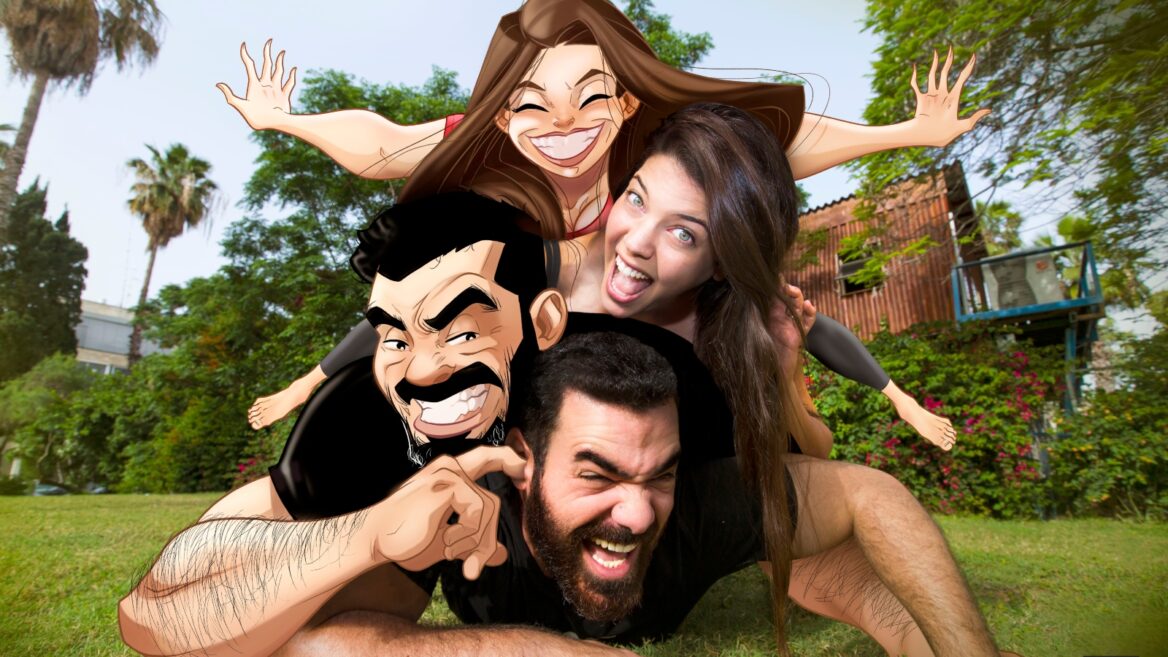 Yehuda and Maya Devir and their self-drawn webcomic characters in “One of Those Days.” Photo: courtesy

Fans always do a double take when they see Yehuda and Maya Devir at a comics convention, or in a New York City subway, or wherever. The young Israeli couple looks like they jumped right out of their virally popular webcomic, “One of Those Days.”

“I suppose it’s like meeting a real Bart Simpson in the street,” muses Yehuda. “We act exactly the same as our characters.”

Indeed, about 7 million social-media followers know that Maya loves super hot showers and hates folding laundry. They know Yehuda’s a big baby when he’s sick and is willing to say “I’m sorry” after an argument. They sympathized with the couple’s struggle to get pregnant.

Most of all, fans smile at the humorous spin the webcomic puts on everyday scenes in a marriage, from dishes in the sink to kisses on the couch. 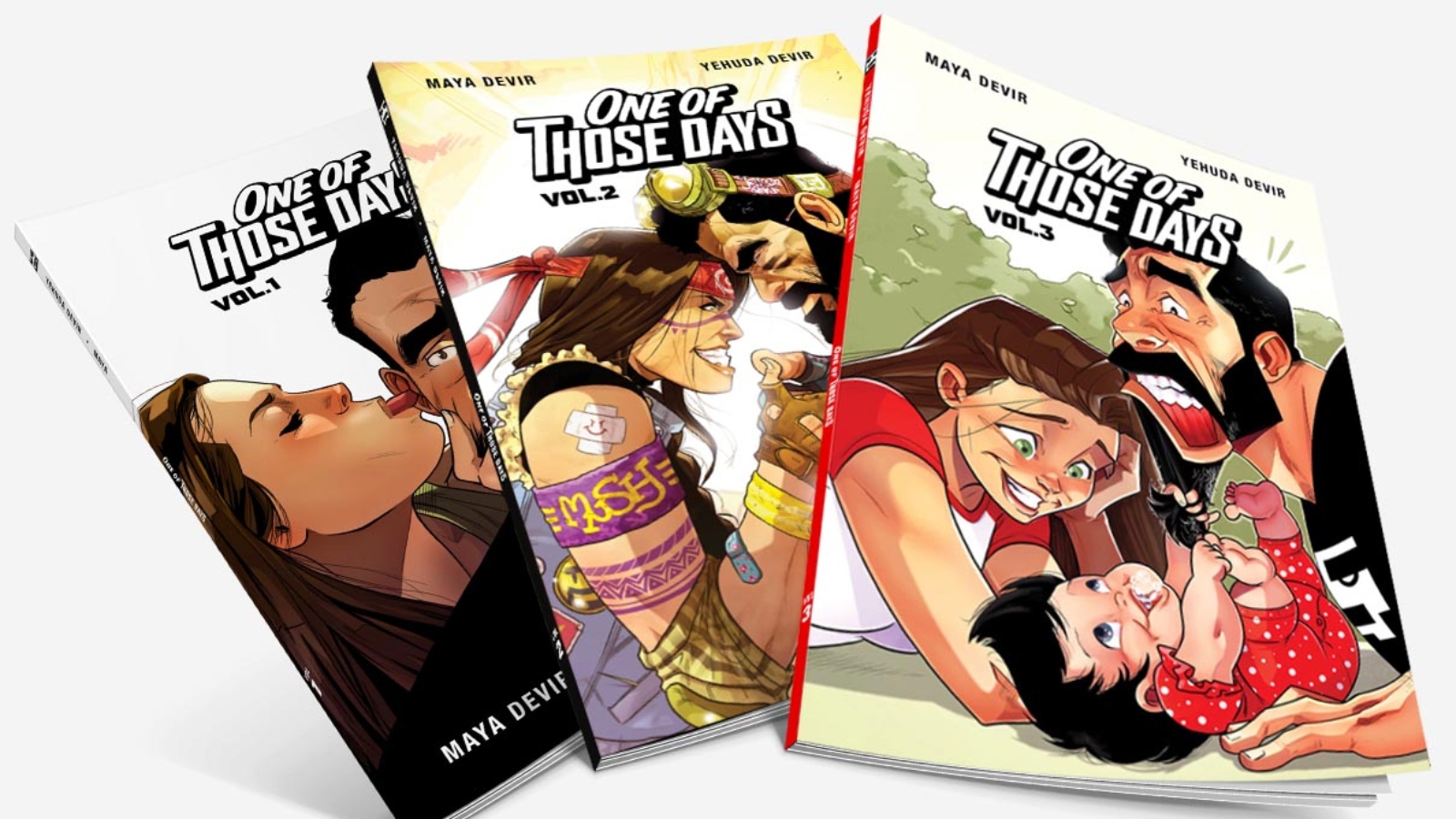 “We get lots of emails and messages from around the world about how we changed the way couples look at their relationship and how they talk to each other,” Yehuda tells ISRAEL21c. “It’s amazing that we can make such a difference for people, that our work can connect Muslim, Jewish, black, white, rich, poor… it doesn’t matter.” 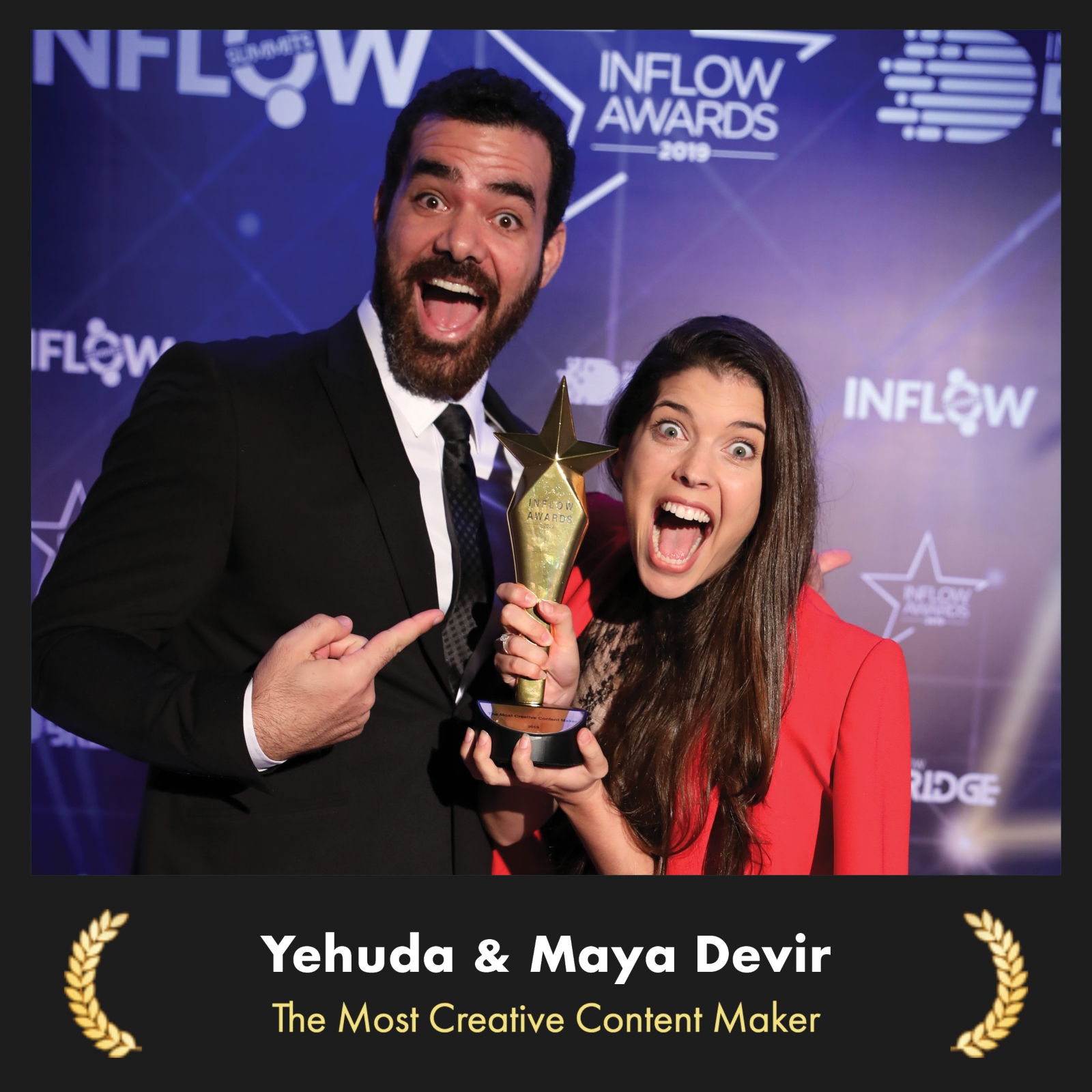 “One of Those Days” won its creators an Inflow Global Summit 2019 award. Photo: courtesy

“One of Those Days” won the Most Creative Content Maker Award at the Inflow Global Summit 2019 Awards for social media influencers due to “its creative, original and different content.”

“We dedicated our award to our followers and supporters around the world. We have fans in Brazil, Japan, Trinidad, Iran, Iraq — basically every country,” Yehuda says.

“People thank us for making them happy once a week and making them feel they are not alone. It’s an amazing journey we’ve been on.”

The Devirs’ journey began in September 2016, when they packed up their diplomas in visual communication from Jerusalem’s Bezalel Academy of Art and Design and moved to Tel Aviv.

The starry-eyed newlyweds hoped to find an affordable apartment in a nice neighborhood. And they hoped to make a living in illustration and design. Neither aspiration was terribly realistic.

“A friend suggested we post a selfie on Facebook asking friends to help us find an apartment,” says Maya. “We didn’t know how to take a good selfie, but we can draw really well. So we did a cartoon of ourselves and posted that.”

Not only did that illustration help them find an affordable flat in a very expensive city, but it also formed the kernel of “One of Those Days.”

While working as a freelance illustrator in the fashion, music and startup industries, Yehuda posted funny snippets on social media about being a new husband.

“Very quickly I joined him because I wanted him to make me look good,” Maya says with a laugh,“ and because the story belonged to both of us. The concept was to illustrate moments we both experienced.” 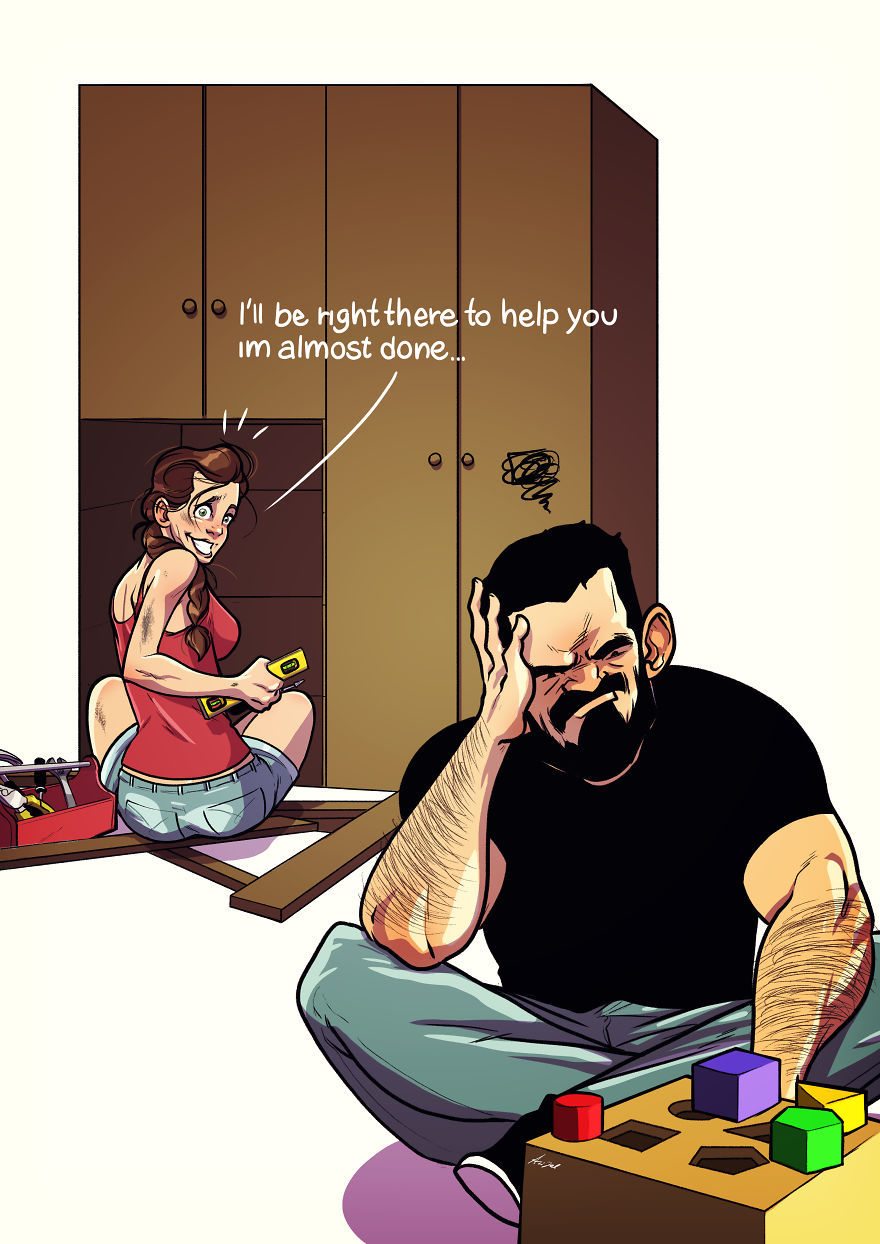 “One of Those Days” depicts everyday scenes in a marriage with color and humor.

In May 2017, BoredPanda posted a piece about the Devirs that went viral. “After a week, we gained half a million followers on Instagram,” Maya tells ISRAEL21c.

“Since then we never stopped gaining followers. We got tons of emails and Yehuda couldn’t manage by himself. So I left my job as art director in an ad firm and joined him full time in October 2017. This was our dream to create something of our own.”

They take complementary roles in each cartoon. “We start the idea together and the actual illustration is Yehuda’s talented hand,” says Maya. “Then I add my suggestions about color composition and typography. I also manage the business.”

Yes, “One of Those Days” has fulfilled the impossible dream of making a living from visual communication. 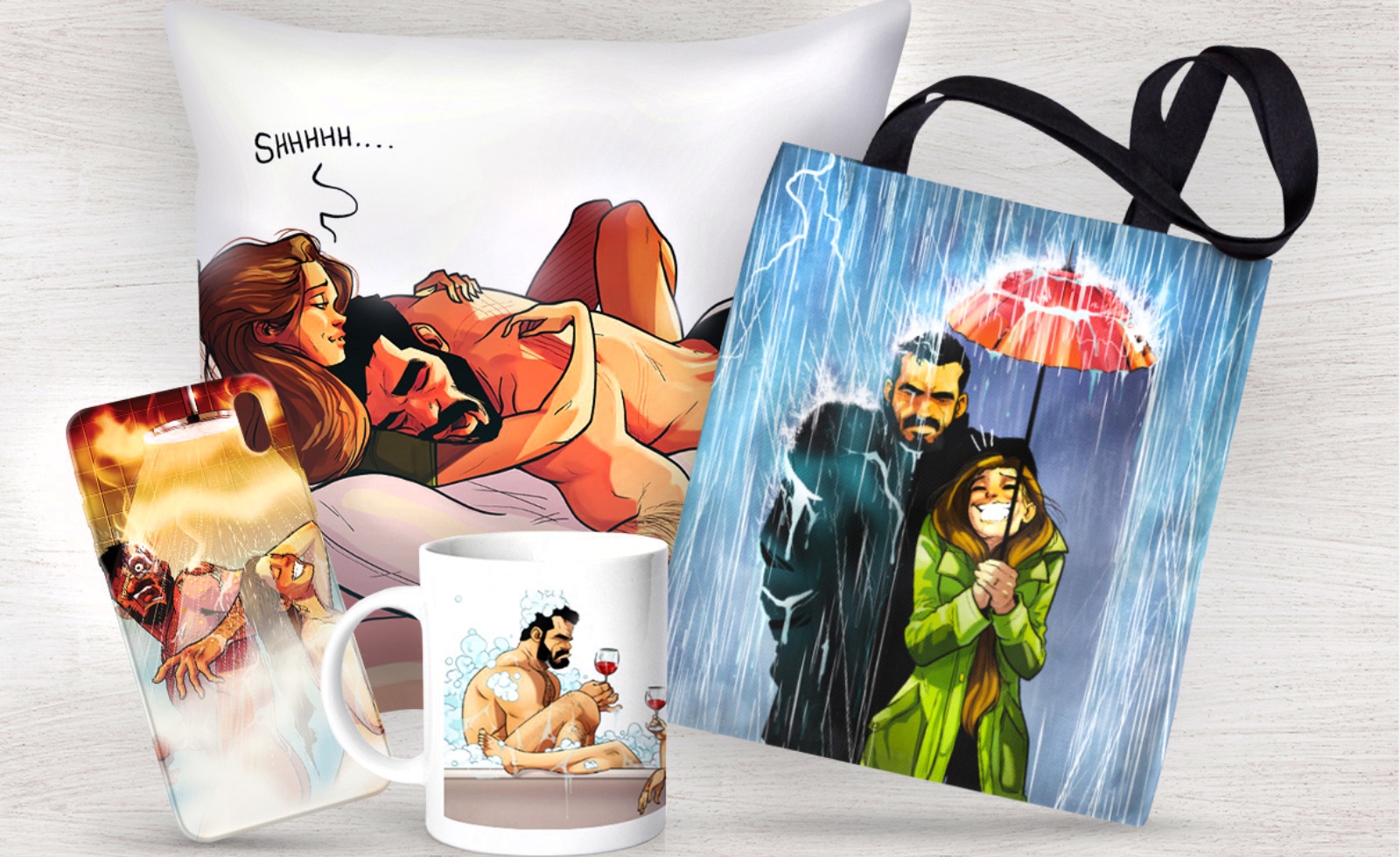 The Devirs sell items imprinted with some of the most popular “One of Those Days” comics.

“I opened an ecommerce shop. At first, we sold only autographed A5-sized prints of ‘One of Those Days’ comics and Yehuda’s other comic illustrations,” says Maya. “People who were into art and comics appreciated that.”

The online shop now sells three “One of Those Days” books plus merchandise including apparel, shower curtains, calendars, phone skins and other items imprinted with favorite cartoons.

The Devirs’ YouTube channel has 46,000 subscribers. They have a Patreon subscription content service. They’ve appeared at comic-cons in Europe, India and soon the United States. And they are in great demand to give talks and lectures.

“Everything we do is because our fans suggested it,” says Yehuda. “Now they want a TV show and we are going to try to do it. We are working with a scriptwriter at a studio in the US.”

From couplehood to parenthood

Relationships proved to be a universal kind of language for the Devirs. Would pregnancy and parenthood also strike a common chord?

“When we decided to move into the stage of being parents and saw it wouldn’t be that easy for us, this was a turning point,” Yehuda confides. “Would we really talk about the unpleasant experience of trying to get pregnant? It’s a super personal subject.”

Maya felt that Yehuda’s humorous and colorful style would put the right spin on the topic and could be supportive for other couples in a similar situation. 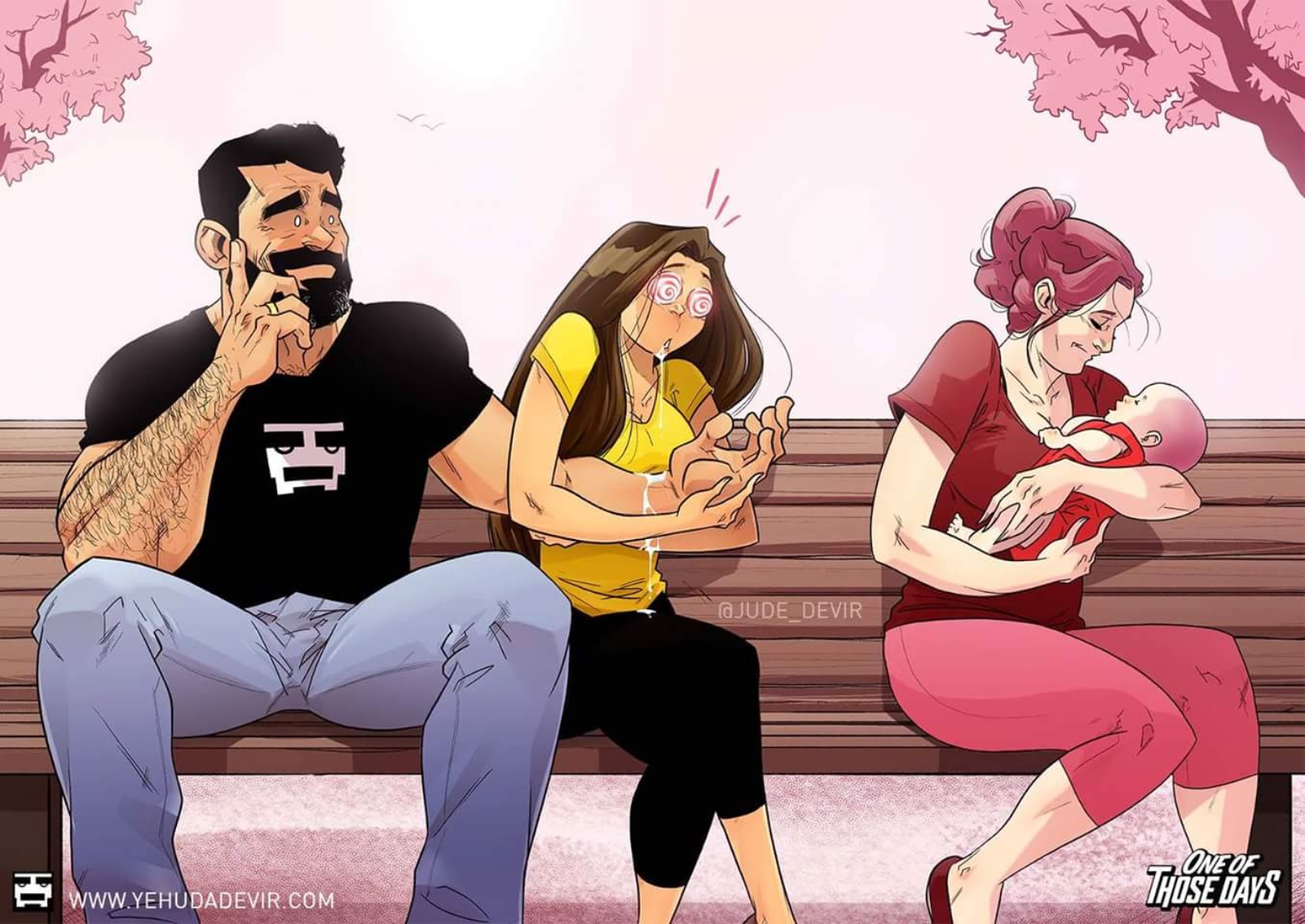 “One of Those Days” tackled the personal topic of the Devirs’ quest to have a baby.

And so they introduced comics about ovulation, periods and lovemaking on demand. Messages offering support and advice came pouring in. It was like a worldwide group therapy session, Yehuda says.

The cartoon announcing Maya’s pregnancy got 16 million likes and shares. The first illustration of baby Ariel got 13 million. As of December 1, she had 219,000 Instagram followers at just six months old. 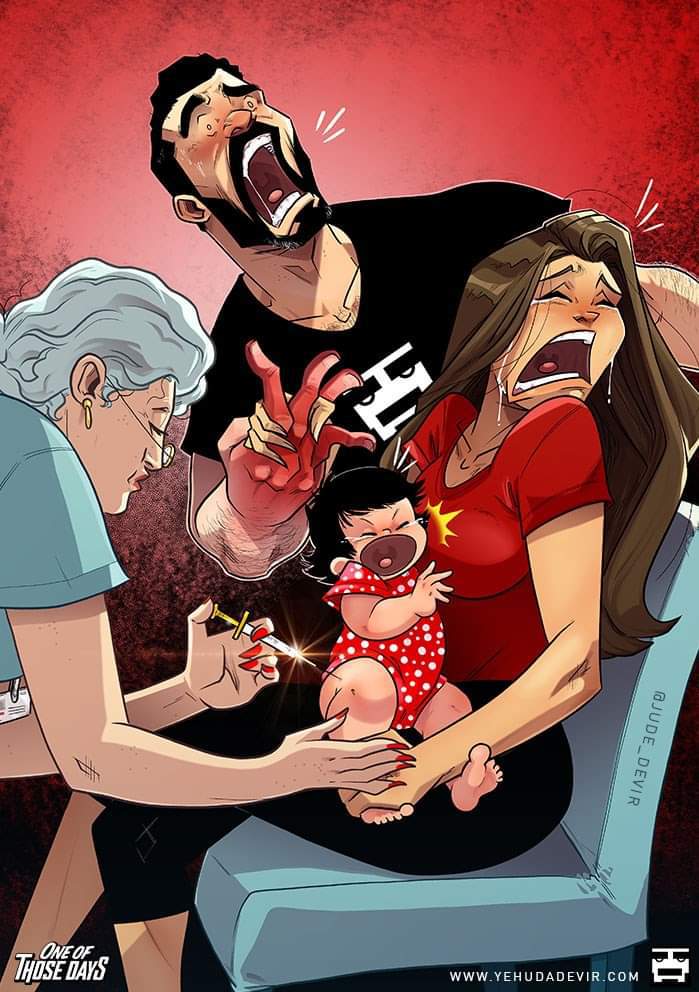 The Devirs share everyday experiences as new parents with millions of followers.

“It was unbelievable to see the amount of love we got from people we didn’t know,” says Yehuda.

“As Israeli and Jewish people, it was especially unbelievable to get supportive reactions from our huge fan base in the Arab world. The Israeli part is not important. We’re just the cartoon couple about love.”

Now living on Maya’s childhood kibbutz, the couple puts Ariel in the care of her two grandmothers when they travel to shows and lectures. The difficulty of parting with their baby became another comic that went viral because it was so relatable.

“It’s hard for Maya and me to leave her,” says Yehuda,“but when she’s older she’ll join us.”

I miss you already…???????????????? If I thought giving birth was the hardest thing a woman had to go through in her life then I was wrong! Separating a woman from her baby is a million times harder. I thank every day that we have been blessed with a job we enjoy and make millions of people happy with us, but the work requires us to travel quite a bit, which means we have to leave Ariel in the hands of her loving grandmothers. Maya is a true hero the way she flies off for work every time despite the difficulty in parting from Ariel and manages to put her future ahead of her own personal struggle. She keeps saying that separating from Ariel is the hardest thing she’s ever experienced, and it doesn’t get easier from time to time, even though it makes sense it will. So, there is no sense in parenting… Only what the heart feels. Being a career person while raising a family is perhaps one of the most difficult challenges we would have to face in life. I don’t know what we would do without both of our amazing mothers. I guess mother love to her child has no expiration date. Shop: www.yehudadevir.com Support us: www.patreon.com/yehudadevir #judedevir #mayadevir #arieldevir #oneofthosedays

Become a GEM member
Read more on:   Culture, Israeli artists, Yehuda and Maya Devir, “One of Those Days”