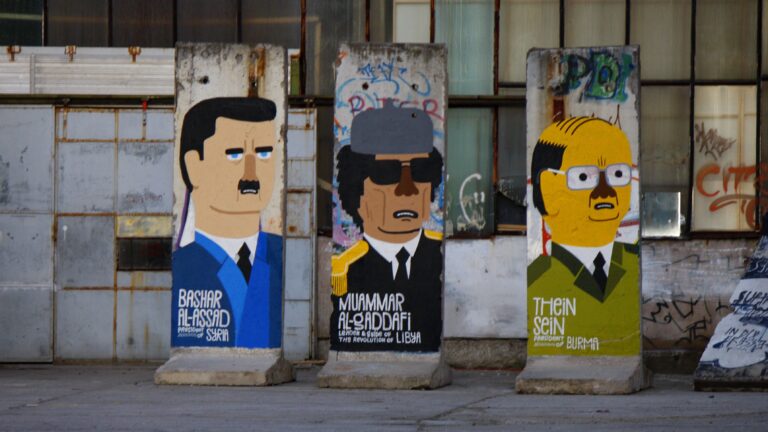 Cartoon portraits of the world's dictators. FX's new television series is based on the world's tyrants. (Shutterstock.com)

FX’s new drama, Tyrant, hasn’t finished filming but it’s already being hyped in America as one of the year’s ‘most hot-button series.’ The new show is an original creation of Israel’s Gideon Raff – who was behind Prisoners of War (Hatufim), on which Homeland was based.

Israeli actors Moran Atias and Ashraf Barhom have lead roles alongside Adam Rayner, Sammy Sheik, and Jennifer Finnigan. The series is being filmed in Kfar Saba.

Tyrant is based on the story of Syrian leader Bashar Al-Assad as well as elements from neighboring countries.

The show’s plot follows Bassam Al Fayeed (Adam Rayner), the younger son of a dictator of the fictional Middle Eastern country of Baladi, who’s been living a fully assimilated life as a pediatrician in Los Angeles. Bassam – who calls himself Barry — is married to the American Molly (Jennifer Finnigan), with whom he has two teenage kids. Barry ends a self-imposed 20-year exile when he decides to return to his homeland for a family wedding. His arrival sparks a culture clash.

Producers behind the show say the storyline was influenced by the Arab Spring as well as Assad.

“I was watching TV one day in my apartment in Tel Aviv and on the news there was a thing about Bashar al Assad, the President of Syria, killing a few dozen people in a city called Daraa. And everybody was saying how horrible he is, a mass killer, he has to go and we have to replace him. And I was thinking that just a few years earlier, everybody was so happy that he, educated in the West, married to a British woman, is coming to replace his father. And I thought he probably misses his life in London now very much. How you go from being that to being hailed a mass killer, that journey was really interesting to me,” Raff is quoted as saying in Indiewire.com.

“If you look at the New York Times, or any paper for that matter, 50 percent of the ink is about what’s happening in Egypt, what’s happened in Libya, what’s happening in Syria. That part of the world is experiencing a seismic shift. And to have the opportunity to tell a story about people and put faces on the things that are merely headlines felt just too good to ignore,” executive producer Howard Gordon (of Homeland and 24) told Indiewire.

Tyrant is being produced by Fox 21 and FX Productions and is directed by Harry Potter‘s David Yates.

Raff has another television series now being filmed in Israel – an action-adventure drama series called Dig that is scheduled to air on the NBC cable network by the end of the year.

Photo illustration by 360b / Shutterstock.com

UNCOVER ISRAEL - Get the ISRAEL21c
Weekly Edition free by email
Sign Up Now!
Bring Israel's story to life.
Millions of people around the world rely on us to gain a deeper understanding of Israel. We are the trusted source for original content you won't find anywhere else.
You can make a difference. Donate today to support journalism that brings Israel’s story alive.
SUPPORT ISRAEL21c
Read more on:   News, Homeland, Gideon Raff, FX, Tyrant