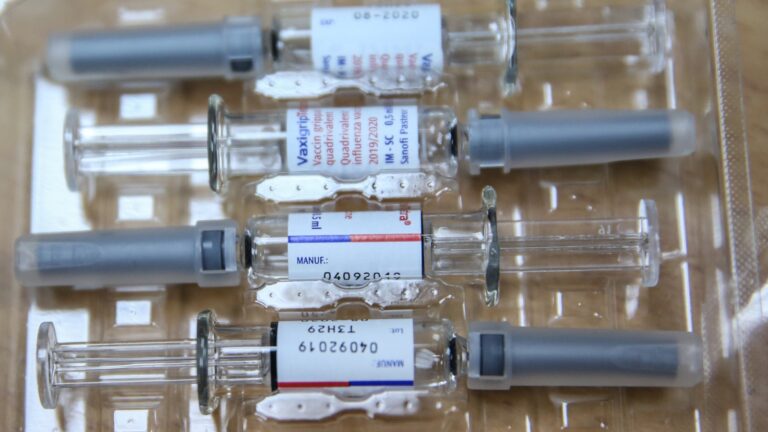 Flu vaccines at a health center in Israel. Photo by David Cohen/FLASH90

Fully vaccinating children reduced the risk of hospitalization for complications associated with influenza by 54%, according to a new study by Ben-Gurion University of the Negev (BGU) and University of Michigan researchers.

The research, published in the December 2019 journal Clinical Infectious Diseases, is one of the few studies worldwide that has tested the effectiveness of childhood vaccination against influenza and risk of hospitalization due to the influenza complications.

The study was led by Dr. Hannah Segaloff, an epidemiologist at the University of Michigan’s School of Public Health, and Dr. Mark Katz of BGU’s department of health management. Katz also is a senior researcher at the Clalit Institute of General Research and teaches in BGU’s Medical School for International Health.

The retrospective study reviewed the vaccination data of 3,746 hospitalizations of children ages six months to eight years old at six hospitals in Israel. They were tested for influenza over three winter seasons: 2015-16, 2016-17 and 2017-18.

The findings reveal that the flu vaccine reduced hospitalizations associated with the flu by more than half. They also validate guidelines in the United States and Israel that recommend two vaccine doses for children up to age eight who have never been vaccinated or who previously received one dose.

“Children vaccinated according to government guidelines are much better protected from influenza than those who only receive one vaccine,” said Segaloff. “Over half of our study population had underlying conditions that may put them at high risk for severe influenza-related complications, so preventing influenza in this group is critically important.”

Katz added, “Young children are at high risk of hospitalization due to influenza complications. Children with underlying illnesses such as asthma and heart disease have an even greater risk of complications. It is important to prevent influenza infections in these at-risk groups.”

The findings also support health organizations’ recommendations to vaccinate children against influenza every year, preferably before the onset of winter. Children under age five are defined as having a high risk of influenza complications.

“This study mirrors a previous study conducted at Clalit Institute where we found that flu vaccine reduces 40% risk of hospitalizations in pregnant women,” said Dr. Ran Balicer of the BGU School of Public Health and director of the Clalit Research Institute. “It found that vaccination is the most effective way to prevent both the flu and hospitalization.”