Over the past few weeks, Israelis have been shocked at the kidnappings and murders of three Jewish and one Arab youth, and the resumption of shelling from Gaza. But reactions aren’t limited to fear, sadness and anger. In typical Israeli fashion, people are thinking out of the box to help prevent future tragedies.

The nonprofit emergency medical response service United Hatzalah launched a public “SOS” emergency alert app that can dispatch an immediate distress call — and the caller’s precise location — to the Israeli police and its own dispatchers.

As of today, the weeks-old SOS app for Android and iPhone already has been downloaded for free by 100,000 users, according to Dov Maisel, director of international relations at Jerusalem-based United Hatzalah.

Another free smartphone app, Tzeva Adom (Red Alert Israel), was developed for iOS by app developer Kobi Snir during heavy shelling from Gaza about two and a half years ago to make sure users in Gaza-area communities wouldn’t miss an air-raid siren.

With Snir’s permission, Ari Sprung developed an Android version in his Jerusalem basement. In the past tense week, Sprung tells ISRAEL21c, the updated app – now including a chat feature so people can share their emotions – is being downloaded at a fast clip. There have been over 100,000 installs of the Android version, and the iOS version is now available in English.

“We’re learning that people are downloading it not only to make sure they hear the alert but also to keep tabs on relatives anywhere in the country,” says Sprung. He and Snir are seeking donations of servers and/or cash to expand the app worldwide in several languages.  They just announced that users of the popular Israeli social app Yo will get a “yo” every time a missile is launched into Israel if they are subscribed to Red Alert Israel.

‘We want everyone to benefit’

Following the June 12 abduction of three Israeli teens, the SOS app was developed within 72 hours by NowForce, the Israeli company that built the LifeCompass GPS-oriented technology for United Hatzalah several years ago to help cut response time by locating and alerting volunteer medics closest to the emergency scene. 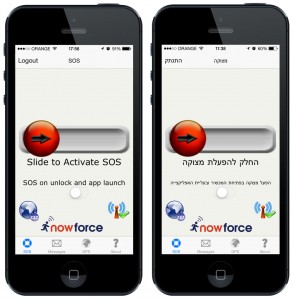 Users only have to slide the button to activate SOS. Photo by Moshe Assulin

“We quickly understood that this technology serving our volunteers can be utilized for the general Israeli public, and we decided with NowForce to do this [app],” Maisel tells ISRAEL21c.

Because the the existing technology functions in Hebrew and English, those were the two languages in which SOS was launched. An Arabic version is coming soon.

“We want everyone in Israel to be able to benefit from it,” says Maisel, adding that United Hatzalah’s 2,400 volunteer medics represent every sector in Israel, including religious and secular Jews, Christians, Muslims and Druze.

“We have one common cause of saving lives, uniting the diverse populations of Israel in one big family and one mission,” says Maisel.

SOS must be downloaded at the website sos.nowforce.com, so that users can enter emergency contact information, explains Maisel.

“When the app is activated, it dials the police and pops up in our dispatch center to give us the user’s location, phone number and additional information. At the same time, the app automatically sends a text message with a link to Google Maps to the contacts entered by the user upon registration.”

Most calls received so far have been first-time users testing the system, says Maisel. They are instructed to deactivate it immediately with a personal code that the person threatening them could not know. These calls aren’t coming only from Israel, but from Israelis on vacation all over the world.

“At 5:00 this morning, an SOS popped up from Skokie, Illinois, and we tried unsuccessfully to contact the user,” relates Maisel. “Our dispatcher Googled the police in Skokie and called them. They immediately sent a police car to the person’s address, and once they determined he was just trying out the app, they had him deactivate it.”

Maisel says United Hatzalah has been approached by organizations and communities in Israel and globally about implementing the SOS app, and is devising an action plan to work with all interested communities.

The app will remain free of charge; all costs are borne by philanthropists, as was the original development of LifeCompass.

ISRAEL21c reported previously that LifeCompass is used by volunteer firefighting forces, emergency teams and police and tournament organizers in America and Nigeria, among other places.

“We are definitely looking internationally,” says Maisel. “We’re developing United Hatzalah units around the world – we’re already in Panama, Argentina, Lithuania and soon Ukraine — and we’ll have this technology available in all those places.”

Anyone living in or visiting Israel can download the app at sos.nowforce.com.