If virtual reality can put players inside a game and take pilot trainees to the sky, then why not use this cutting-edge technology to give children with severe intellectual and physical disabilities experiences they cannot enjoy in the real world?

That was the thinking behind a unique-to-Israel use of virtual reality (VR) pioneered at ALEH, Israel’s largest network of facilities for children with severe cognitive and physical disabilities.

Yael Shidlovsky Press, the occupational therapist (OT) who tailored advanced Israeli VR technology for residents at ALEH’s Moriah facility in Gedera, tells ISRAEL21c that the 100 residents from age six to 30 do go on field trips. But their limitations keep them from fully interacting with outdoor environments – say, digging at the beach or picking flowers in a field.

A simulated environment affords them full access to such activities and at the same time provides strong therapeutic benefits.

“Research shows that virtual reality is more successful than standard approaches in motor and cognitive treatments because the simulated activities are perceived by the brain as real,” Press tells ISRAEL21c. 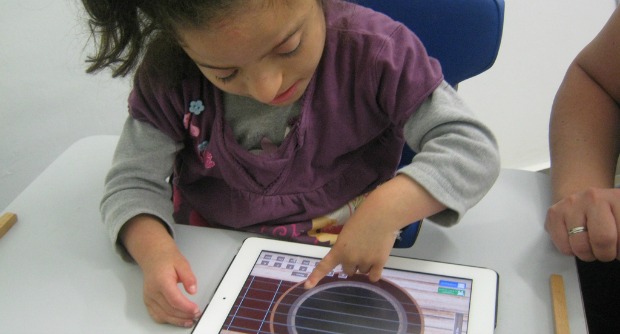 Apps for iPads open new worlds to people with many different disabilities.

Press knew that VR can help people recover motor and cognitive skills after a stroke, and she devised her own pilot for 20 residents of Moriah two years ago. She uses a system developed in Israel for the 2004 Olympics in Greece, which projects the lifelike environment onto any bright surface.

“For the cognitively disabled population, the use of VR through this system is innovative, challenging and relatively little researched,” says Press, who also is an OT consultant to the health services department of the Israel Social Affairs and Social Services Ministry’s division for intellectual and developmental disabilities.

“This was something that was invented for entertainment, and we adapted it to our population as a therapeutic tool.”

OTs at Moriah often integrate real items into the session. For example, shells might be strewn on the backdrop of an ocean scene, and the patient is asked to gather or sort them. “This adds an additional dimension to the activity,” she says.

Press has hosted therapists from other Israeli institutions to train them in the technique. “The company that makes the machinery taught our staff how to use it, but we built the therapeutic protocols ourselves because this technology was not developed for people with special needs.”

Moriah, one of ALEH’s four residential centers, is dedicated to using advanced technologies to enhance both therapeutic and leisure activities for its population, says Press.

“People with intellectual disabilities have lots of time and little to do,” she explains. “We have staff working here till 7 or 8 every evening so they can help the residents use the technology in their leisure time.”

Sony PlayStation 2 EyeToy and the iPad tablet computer, along with computers and adaptive switches for those with motor disabilities and large plasma screens for those with visual impairments, are among the gadgets incorporated at Moriah.

An iPad app enabled a girl we’ll call “Einat” to overcome her difficulty with colors and shapes. Einat used the app to copy a picture of a house, and e-mailed to her family with the aid of her OT, Gila Schwartz. The girl’s father used the iPad’s Skype app to tell Einat how proud he was of her accomplishment. Since then, she’s been communicating regularly with her parents, sending them photos and video messages in real-time.

“The advantage of iPad is that it’s very available,” says Press. “We can use it with people in wheelchairs because it’s small and portable so we can put it on their wheelchair table. The children like it very much and it is very intuitive — you don’t need to explain how to use it, and it is a ‘normal’ device.”

The iPad can support various communication apps that let non-speakers convey their needs and feelings to therapists, friends and staff. Other apps assist with fine motor skills such as handwriting.

In the arts-and-crafts room, adaptive switches enable residents with motor difficulties to create and decorate items such as hamsas and mezuzah covers to be sold through the organization’s online boutique.