Algae — that green, slimy stuff you wipe off the side of the pool — could help save Planet Earth.

That’s the hope of Seambiotic, an Israeli clean-tech company enlisting algae in the business of carbon capture. In 2007, ISRAEL21c was one of the first to report on Seambiotic’s pilot plant with the Israel Electric Corporation in Ashkelon.

While bureaucratic red tape has stymied its commercial success, the pilot plant has led to some positive developments for the company and the environment.

Now, the company has five business deals in the works in the United States, Italy and in China, where it’s launching its first commercial algae farm this month.

Seambiotic is also working with the National Aviation and Space Administration (NASA) in the United States to develop a commercially feasible biofuel variety from algae that has a higher freezing point that other plant-based biofuels from corn or sugarcane.

Seambiotic, headed by Noam Menczel and based in Tel Aviv, takes a novel approach to using algae for fuel. The 15-person company has a patented approach that connects a power plant flue to a series of algae-munching ponds.

Algae out to lunch

Marine-based algae, which are actually tiny plants, live on a diet of carbon dioxide and sunlight — both found in abundance at power plants in sunny Mediterranean countries and the southern United States.

Theoretically, an algae pond could produce 30 times more feedstock for biofuel than the land-based crop alternatives. However, so far nobody has been successful in figuring out how to do this in a cost-effective manner. GreenFuel, a US company headed by Israeli Isaac Berzin, crashed and burned in its attempt, losing $70 million of investment money along the way.

Approaching the challenge from a different direction, Seambiotic offers a way for its partner power plant owners to see a return on investment for reducing carbon emissions immediately.

By sucking out power plant effluent and feeding it to algae — filtering out heavy metals first, of course — Seambiotic and its partners generate a healthy income by producing a valuable nutraceutical based on algae, which is especially popular in Eastern countries such as China. 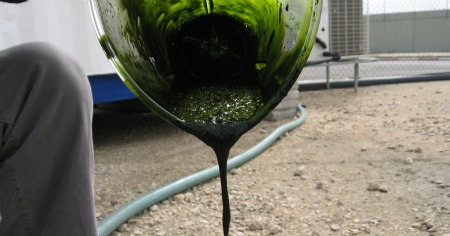 “Carbon capture and food additives — these high-ticket items are our bread and butter. Fuel is our long-term objective,” Menczel tells ISRAEL21c.

Seambiotic’s venture with Yantai Hairong Electricity Technology and Penglai Weiyuan Science & Trading (both associated with China Guodian Corporation) involves a 500-megawatt power plant in eastern China, the fifth-largest such facility in the country. It will produce algae-based nutraceuticals as an end product, and Seambiotic will get 25 percent of the profits. Menczel says an additional 150 power plants are run by this conglomerate.

For every 25-acre algae pond, Seambiotic can reduce 1% of the carbon dioxide being emitted from the power plant. The company could add as many as 10 pools per power plant, resulting in a 10% reduction of this greenhouse gas believed to be contributing to climate change.

At the same time, Seambiotic is conducting R&D with NASA at its research headquarters in Ohio regarding algae-based biofuels. “We want to be in the front row when it happens. There has been so much effort and money put into this business,” Menczel says.

He has high regard for the rather stiff competition already involved in similar endeavors in the United States: Sapphire Energy, funded by Bill Gates and the Rockefellers, and Synthetic Genomics. Menczel sees both as potential partners or possible purchasers of Seambiotic’s IP.