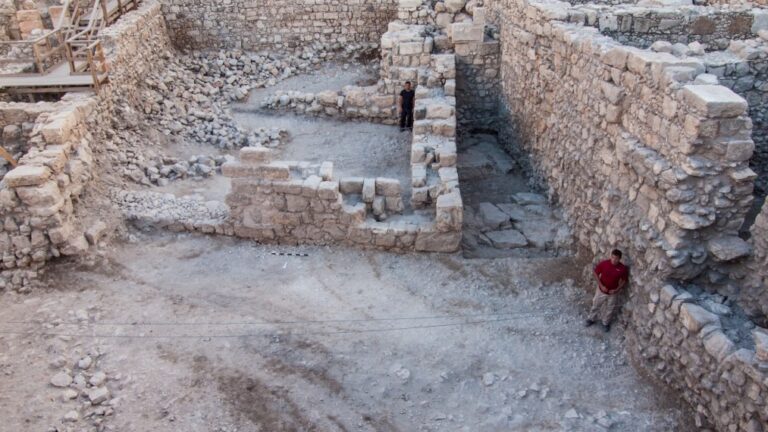 For the first time, the Israel Antiquities Authority says it has found a house dating back to the Hasmonean period in archaeological excavations in Jerusalem.

The impressive building from the second century BCE are being unearthed in excavations the Israel Antiquities Authority is directing in the Giv‘ati parking lot, located in the City of David in the Walls Around Jerusalem National Park.

“The importance of this discovery is primarily because of the conspicuous paucity of buildings from the Hasmonean city of Jerusalem in archaeological research, despite the many excavations that have been conducted to date. Apart from several remains of the city’s fortifications that were discovered in different parts of Jerusalem, as well as pottery and other small finds, none of the Hasmonean city’s buildings have been uncovered so far, and this discovery bridges a certain gap in Jerusalem’s settlement sequence,” say Dr. Doron Ben Ami and Yana Tchekhanovets, the excavation directors on behalf to the Israel Antiquities Authority.

“The Hasmonean city, which is well-known to us from the historical descriptions that appear in the works of Josephus, has suddenly acquired tangible expression,” they add.

The archaeologists say the building’s broad walls (more than one meter thick) are made of roughly hewn limestone blocks that were arranged as headers and stretchers, a construction method characteristic of the Hasmonean period.

Although numerous pottery vessels were discovered inside the building, it was mainly the coins that surprised the researchers. These indicated the structure was erected in the early second century BCE and continued into the Hasmonean period, during which time significant changes were made inside it.

UNCOVER ISRAEL - Get the ISRAEL21c
Weekly Edition free by email
Sign Up Now!
Bring Israel's story to life.
Millions of people around the world rely on us to gain a deeper understanding of Israel. We are the trusted source for original content you won't find anywhere else.
You can make a difference. Donate today to support journalism that brings Israel’s story alive.
SUPPORT ISRAEL21c
Read more on:   News, Archaeology, Israel Antiquities Authority, Hasmonean, Israeli Antiquity